All the Victorian era sources, be it newspapers or magazines, had a repetitive echo about how a lady should be cautious about her countenance and her attire; and this caution was concerned with finding a suitable husband. While there were talks and advertisements about beauty for men also, women too took pride in their own skincare and beauty. Victorian makeup was certainly one significant way to enhance their beauty. 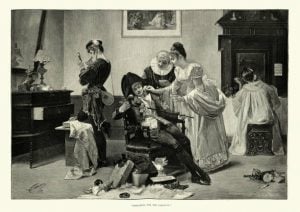 Vintage engraving of People preparing for the carnival, 19th Century

The Victorian era’s ideal beauty was a pale face, big dark eyes, and rosy cheeks. Blemishes, pimples, and freckles were absolutely unsightly – but to apply is makeup is a matter full of conjectures and controversies.

Pharmacists and apothecaries created the first cosmetics to get rid of pimples, freckles, and blemishes. Eventually, there was an emergence of national brands; they were creating face creams at low-cost. There was frequent addition of directions for preparing home-made creams in ladies’ magazines. 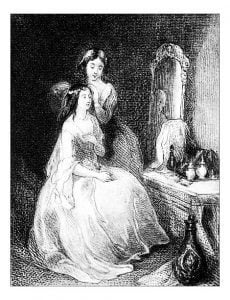 Antique illustration of women in the Victorian era

Some of the basic ingredients were rose, sugar, lavender, lemons, oatmeal, almond, and elderflower. Flowers were soaked in the water to create face wash. Sugar was used as scrubs to clean the opened pores and skin.

Spermaceti (sperm whale oil), almond oil, and white wax were used to create cold creams. Through performers and actresses like Lily Langtry, this industry of beauty products used to endorse their brand. This promotion also reinforced the thought that makeup only belonged to the theater, immoral women, and prostitutes. But in fact, this class of women hardly used makeup. 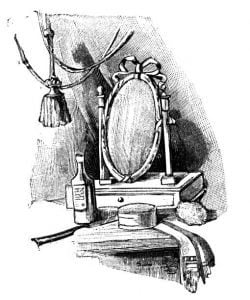 Illustration from the 19th-century mirror and make up

Mercury, red and white lead, belladonna, and other now-known toxic elements were used to create ready-made makeup. These made the makeup look more durable and richer based on color, but they were immensely unhealthy for the skin. The quality of richer in color drew women to buy these products, usually via mail order or through pharmacists and at times from department stores, where these products were kept concealed until asked for.

Face powder is the one acceptable makeup product during the Victorian era. This makeup product was common in the vanities of middle and upper-class women. It was created of lightly colored and scented starch, similar to Victorian soap and talcum powder. 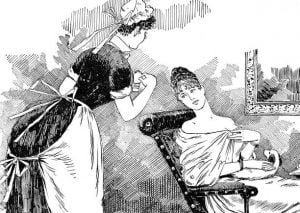 Other ingredients used to create this face powder are French chalk, Venetian talc, rice powder, and powdered milk made of magnesia. Even ground and dried zinc oxide created an extraordinary pure white powder, which did not turn grey when exposed to candles, coal fumes, and gas; Henry Tetlow discovered this combination in 1877.

Applying the cream beneath the powder helped to hold the powder for a long period. This is the modern-day thing with concealer or foundation. Although Victorian makeup did not provide the same coverage of modern-day powder, it certainly helped conceal the skin’s oily skin and pinkish undertone.

Eyeshadows became common after the late teens. Many women needed to darken their facial hair to look attractive. Charcoal, Indian ink, burnt clove paste, and elderberry juice were used to darken facial hair simply by using fingers. Some of these could be used for the eyelid, which worked as eyeliner, and a slight smear of castor oil at the top of the lid, which attracted light towards eyes even without adding color. 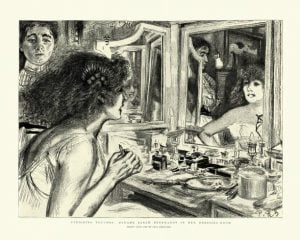 Vintage engraving of Actress Sarah Bernhardt putting on makeup in her dressing-room, 1894.

Eyebrows were plucked into the shape of a natural arch. Eyelashes were trimmed sometimes with the help of tiny scissors under the misconception that it will grow fuller.

The most controversial makeup and evident ‘paint’ a woman could put on was definitely lip color. Lip color was created by using ground beetles mixed with cocoa butter, animal fat, and wax. It was applied by using the fingers on the lips and cheeks. Beetroot was a natural aid for coloring the cheeks.

Another very subtle technique to apply color on the face was to mix color and water and sink a piece of gauze, let it dry, and when needed, dust the face with that gauze, which is now colored. The result somewhat looked like pinkish – red contrasted over pale skin. Those women who were not confident enough to pull off makeup and colored lip used to dab beeswax or face cream to add a bit of shine on the face. 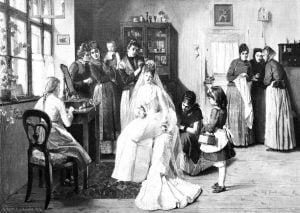 Illustration from the 19th century

A lady’s vanity or dressing space was a gorgeous collection of beauty products, including bottles of perfume, small canisters of products, and combs for the hair. Many women were very private and confidential about their cosmetics; they used re-used prescription bottles and filled them with creams and lotions. Some women went to the extent of buying medicine chests and toilet boxes with concealed compartments. 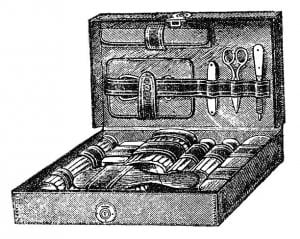 the illustration was published in 1895 “Lindeman catalog.”

Different boxes hold different cosmetics, beauty products, and ornaments—a jewelry box to hold necklaces, rings, earrings, brooches, and hat pins. A love box was used to hold three or four pairs of gloves. An odor case was used to hold three-four bottles of perfume. A manicure box held different tools to make nails and hands look pretty. There was a toil case to hold hand mirrors, combs, and brushes. These boxes were wonderful inside and outside, designed in velvet or satin, with silver trim surrounding the fine wood case.

Which is the fascinating ingredient according to you? Have you ever tried to create any of these beauty products? Let us know in the comment section below – THE COMPLETE VICTORIAN ERA MAKEUP HISTORY.