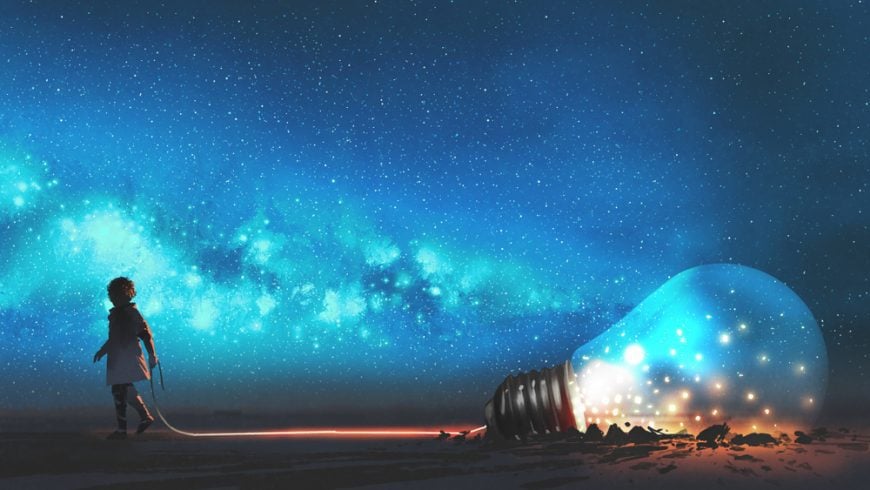 ‌The art of imagination is not something one learns in school, nor is it any commodity that one can purchase from supermarkets or a shop; it is inbuilt in our microchip – which is none other than our brain. Our brain is blessed with the tremendous power of imagination. It is capable of imagining things that are far away from our reach. It is capable of shaping ideas into life-like scenes.

Our brain can imagine almost anything even if it falls under the category of ”IMPOSSIBLE”. ”Imagine”, ”imaginative” and ”imagination” are the three keys that provide access to the doors of our own world of fantasies. The power of imagination is absolutely tremendous.

Imagination is not something we casually see while we are in our dreams. Rather, imagination can form a mental image of something that we can not perceive through our five senses. With this heavenly ability, one can imagine the entire world in their mind. With the assistance of this power, one can travel anywhere in the world with the speed of light or do anything that reality imposes restrictions on. It not only includes seeing numerous pictures in our mind, but it comprises many other elements too. One can imagine the sound, taste, and feel as per his preference. A person possessing a strong imagination must not be called a daydreamer or something of that sort because imagination is so much more than that.

The stronger the power of imagination, the stronger one will be created. Imagination and creativity are two interlinked topics. If one is good at imagining things, then the level of creativity of that person can be transparent to the rest of the world. It is used by each one of us in our day-to-day lives – consciously or unconsciously.

It is one of the most wonderful gifts from God. Whether of any device or any law, the creators must have a tremendous imagination level, as creativity and imagination are two key factors for any invention and any discovery. The creative power of imagination is necessary for achieving success in any sphere of life. It is an important and secret ingredient in the recipe of a champion or a successful person.

If someone wants to achieve something in life or become someone renowned, they need to have creativity, accompanied by imagination’s wonderful power. This excellent combination is not found in superheroes but every one of us. It is a real heroic power that is embodied in each one of us and is far better than the fake realities that we watch on television or we hear of in stories.

Imagination also helps us in fulfilling our desires when accompanied by a positive attitude.

The power of imagination is not just a matter of imagining impossibilities. Instead, it is concerned with TOUCHING LIFE WITH IMPOSSIBILITIES.