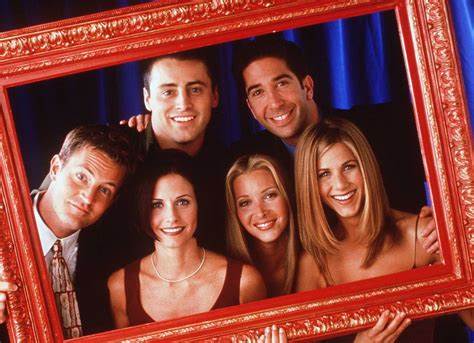 F.R.I.E.N.D.S  has been the best show in the history of show-making with all of its amazing characters. Watch these adorable 10 best friends episodes.

You cannot be any more excited to know about these Ten Best Episodes of Friends. F.R.I.E.N.D.S  is an American sitcom television series. It is created by Marta Kauffman and David Crane. The show lasted for 10 seasons and 236 episodes revolving around the six friends living in Manhattan, New York City.

It has been the best show in the history of show-making with all the appealing and amazing characters. They are ross and Monica, phoebe and joey, Rachel and chandler, and some amazing episodes focusing on ross and Rachel, Rachel and Phoebe as well as chandler and joey. near the age of 25 years as well as all the guest stars.

It feels like it was yesterday I was introduced to this incredible show but it has been a  wonderful journey full of chuckles, smiles, banter, weirdness, and a few tears. The best TV show ever. Watching ross and Monica and all the other is very intriguing.

To me, F.R.I.E.N.D.S has become my best friend who was there for me encouraging me to keep going and growing through all the obstacles and challenges of life. For those, who have the misfortune of not watching Friends I request you guys to give it a try and see how your world changes into smiles, laughter and fun.

The show tracks this beautiful life of six Friends struggling with relationships, family dramas, adulthood, careers-in short with all aspects of life, and sticking together with each other through all of it.

It was a difficult task to choose Ten Best Episodes of all times because all of them are my favorite. It makes your stomach hurt from all the constant laughing right from the beginning till the end of each episode.

With a heavy heart, I bring you the 10 Best friends Episodes which will make you roll over your stomach with their witty and sarcastic comebacks and odd ways.

Let’s dive straight into the 10 Best Episodes of Friends of All Times without any further distractions.

I must say it was a difficult choice to make. Watching this episode one can have the time of his/her life. A complete Blackout in Manhattan containing Chandler’s defense mechanism of sarcasm in awkward situations such as being trapped in an ATM with a hot Victoria Secret model.

Ross’s enthusiastic attempts to finally ask Rachel out along with being attacked by a crazy cat. The cat turns out to be of Paolo, a hot Italian guy over whom Rachel crushes. Ross’ whimsical reactions & answers out of jealousy are must watch.

Along with Phoebe’s odd as well as amazing songs on guitar and weird countdown. Joey tribbiani’s usual innocence and silliness flashing up shots of giggles which makes it one of the 10 Best Episodes of Friends.

This can be an all-time favorite episode. Ross searches for his old pet monkey, Marcel who has become a star-stud in Hollywood acting and advertising.

On the sets of Outbreak 2, Chandler meets an old batchmate with whom he played a prank 20 years ago by manipulating him and leaving him naked in a restaurant’s restroom and his classic exit from there.

Rachel and Monica’s cat-fight over Jean-Claude Van Damme with Phoebe acting as a referee pacified things. Joey tribbiani’s innocent attempts to impress the director and later his assistant obtaining a date with her has to be covered in the best episodes of all time.

It’s impossible to talk about the best episodes and not to talk about this one. Another brilliant Thanksgiving episode revealing Monica and Ross highly competitive about the Geller Cup of football due to which they were banned from playing it.

Along with football, we witness Joey tribbiani and Chandler playing against each other to get a Dutch woman’s attention. She in the end rejects them both.

Another amazing episode that will keep you rolling on the floor with its sharp comebacks and a whole new dimension of weirdness. Joey punishes Chandler for betraying him and their friendship by kissing Kathy.

To prove he’s sorry, Chandler shuts himself in a box proving his friendship to Joey. As a side plot, everyone picks on Mon because she is dating Burke’s son which ends in a total disaster.

Here is an amazing article about Friends if you wish to explore. Check Here.

5. Season-5, Episode 11- The One with All the Resolutions

Another episode that I’ve selected for 10 Best Friends Episodes is the One with All the Resolutions.  Ross tries to make his life a little adventurous by resolution to try a new thing every day for a whole year.

But it turns into a disaster when he wears black leather jeans on a hot day. It ended up in the washroom trying all sorts of stuff like baby powder, Vaseline, and water to expand the shrunken leather.

Failing it he comes out of the washroom with the pants in his hands. Chandler takes a resolution to not to make fun of his friends, Rachel not to gossip, even after she learns about Mondler. Joey to learn Guitar and Monica to take a lot of pictures.

6. Season-5, Episode 14- The One Where Everybody Finds Out

After successfully hiding their relationship from all their friends except for Joey makes the spectators anxious about the disclosure. Phoebe and Rachel decide to make the game a little more fun but Joey tired of carrying around the secret tries to stop them.

Yet Phoebe flirts with Chandler and plans a date with him to break him. She thought he would reveal their hidden affair in state of total awareness. In the process, Chan reveals that he could not kiss Phoebe because he loves Monica. Ross watching them doing it from the new apartment he got from the Ugly Naked Guy is the reason this has to be included in the best episodes.

This episode represents a parallel universe where Ross was still married to his lesbian wife, Carol, Rachel would’ve married Barry. Monica was still fat and a virgin, Chandler had the guts to quit his job and struggles to become a comic writer.

Phoebe is a broker playing in millions and Joey becomes the star-stud of The Days of Our Lives because he wasn’t killed in the elevator shaft. But even after all, the fact remained the same they all will still be there for each other no matter in what universe they are.

This has to be the most-watched and loved episode out of the best episodes. It made the audience wait for this particular episode to watch their favorite couple, Mondler exchanging vows.

This was important for Mondler’s marriage but also revealing Rachel’s pregnancy and constructing the mystery around who is the father.

The episode is filled with Monica’s excitement, and Chandler’s disappearance and fear. Ross’s search for Chandler also Phoebe and Rachel’s efforts to handle Monica with Chandler missing. Joey struck with a drunk co-actor who just wouldn’t get the scene right.

The classic of all the episodes of all times because none other than Brad Pitt himself makes a guest appearance in this episode as Will Culvert. Will lost all his fat and looks phenomenally handsome with only two enemies, Rachel Green and Complex Carbohydrates.

Turns out that, Rachel was mean and bullied  Will during High-School but now she even refuses to recognize him. Of course, furious with her Will reveals a high-school secret of a band he and Ross established named, I Hate Rachel Green spreading the rumor of her being a hermaphrodite.

The rumor was so successful that, Chandler in his high-school heard about a hermaphrodite cheerleader from Long Island.

To describe this episode, you need just one word that is gut-busting. The amount of fun and humor camouflaged in this episode especially through funny characterization of Ross is side-splitting which forces one to roll on the floor clutching their stomach.

Ross being the geek is encouraged to visit a spray-on tan place to get a good tan after watching Monica’s tanned legs.

However, Ross gets sprayed tan but it’s not what is desired forever. He gets four shades darker than he wanted due to counting accidents and other calamities. And on top of that, his tan is uneven, darker on the front, and lighter on his back. It helps in leading the episode to one of the unforgettable 10 Best Friends Episodes.

Last year, the show completed its 25 years celebrating its silver jubilee continuing to be the most loved and watched show of the all times. People from a child to an old adult can always find joy in this spectacular show finding moments of peace and sanity. It is the perfect way to spend your time. However old this show gets, with every watch I find something new and delightful.

Many other extraordinary ones still exist like season 5 episode 14, ross got high season 6 episode, and many more.

Suggested reading: Exciting Youtube Challenges to Do by Yourself