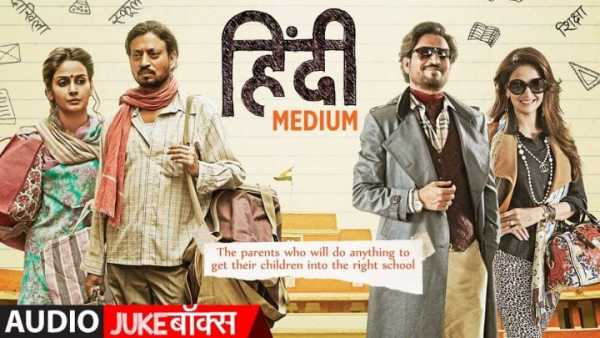 Hindi Medium is a drama-comedy movie directed by Saket Chaudhary, the movie revolves around a rich family residing in Chandani Chowk and trying endlessly to get their daughter the education which would allow the elite class of the society to accept her as one of their own, which can only mean admitting her into a high class English medium school, but there is one tiny problem, The Batras (played by Irrfan Khan and Saba Qamar)  don’t know English and to get the kids in a top English medium school, parents need to be fluent too. This is where the funny part kicks in. The protagonist, played by Irrfan Khan tries and tries and tries to speak English and hilariously fails. Hindi Medium is the third movie by director Saket Chaudhary. Chaudhary has made us LOL by his previous two films too, ‘Pyar Ke Side Effects’ and ‘Shadi Ke Side Effects’.

The movie aims to point out everything that is wrong with our education system and how languages cause barriers in the society, especially the English language. The movie with no monotony and very hilariously shows us one language casts a tag to a person, people who can speak fluent English are tagged to be ‘high-class’ whereas people who can, ‘not-so-high-class’, irrespective of how wealthy or influential a person is.

The movie has received very good reviews by many acclaimed reviewers, and obviously rightly so. The movie presents a promise of good 2 hours and 12 minutes family time. The actors fit perfectly into the roles, the timing of comedy is just right, the story is good, the Delhi lingo- the grip over it is just perfect and, of course, IRRFAN kHAN!

You will love the movie if you want to watch something lighthearted and at the same time fond of social commentary. Hindi Medium is nothing less than a must watch.