For the residents, most of the popular Charlotte breweries have now become a part of many family traditions like wedding receptions, baby showers, birthdays, Thanksgiving holidays, and other occasions.

Charlotte breweries have quite a stock of unique beers to satisfy your taste. Some new ones might become your favorite too. They make and sell their original beers along with commercial ones that are available in the market.

Today you are going to read about the ten fan favorites Charlotte breweries that you should give a visit to.

Heist Brewery is a brunch spot, brewery, and pub in Charlotte. Located in Highland Park Manufacturing Company Mill No. 3 in NoDa. It is one of the most popular Charlotte breweries among the residents and visitors of NoDa.

On Sunday, Heist Brewery provides a fabulous and delicious brunch menu. You can eat waffles, omelets, meat, salads, and desserts. You can wash it all down with beer and cocktail drinks.

Open only during weekends; you can have beer and cocktails in Heist Brewery during their opening hours. While lunch and dinner are also available, the Sunday brunch is the star of this brewery.

In their second location in Camp North End, you can enjoy a good mug of barrel-aged beer.

Triple C Brewing Company is one of the staple Charlotte breweries, which has a loyal and ever-increasing fan following.

They have a variety of beer from blonde ale to aged stout, which you will like to drink while having a pleasant time with your friends or family. They also craft beer under categories like light, malt, dark, and many others.

Opened throughout the whole week, Triple C Brewing Company is one of the Charlotte Breweries that adapted through modern times and now has a private open space for weddings, parties, or corporate meetings. 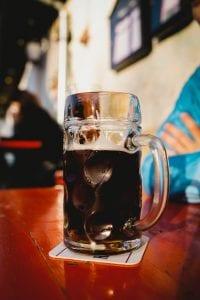 One of the newest Charlotte breweries, Free Range Brewing, is located in a friendly neighborhood of Plaza Midwood in the Camp North End. Here not only can you bring your family and friends, but also your pets.

This brewery is a favorite among the community and is a regular destination for evening gatherings. You can enjoy a good glass of small-batch beers, which are locally sourced from Charlotte.

While small-batch beer is the star attraction, Free Range also has a great wine and beverage selection, and you can enjoy those while listening to live music and food.

Open from Wednesday to Sunday; the brewery also holds many food events throughout the whole year. The brewery is family-owned and operated by Jason, Sarah, Jeff, and Brittany Alexander. 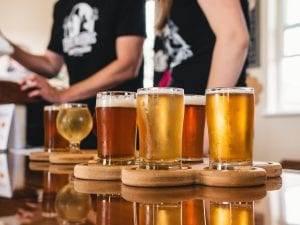 Olde Mecklenberg Brewery is one of the oldest and well known Charlotte breweries. They also have a beer garden so they can drink in the open air and even cater for events.

They have many original craft beers; among them, Copper Albeiter is a fan favorite. Their Christmas special Yole Bock is a talk of the town. Many other beers are also made, which might acquire your praise and appeal to your taste.

While you enjoy a good glass of beer, you can also have salty or sweet pretzels or their famous beer cheese. These are the snacks that compliment the drinks.

They also arrange and decorate the beer garden according to festivities and events like weddings, graduation ceremonies, and private parties. 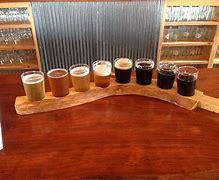 NoDa Brewing Company is one of the most esteemed and successful Charlotte breweries is a must-go. They have a spacious taproom and many beers, which you can drink, kick back and relax.

The taproom welcomes visitors and regular customers from Tuesday to Sunday. They are quite well known for their many awards winning beers, one of them being the famous Hop Drop n Roll.

They even organize charity events where visitors and charity participates can drink to their heart’s content, and the money will be donated to different charities.

Every week they hold events like yoga, food truck, live music, painting, and many other activities. They now have four locations all over Charlotte, bringing you their best and original beer concoctions.

Among their original and great tasting beers, the most in-demand is the Juicy Jay (a pale ale), Penguin Pills, and Caroline Sparkle Party. If you drop by Legion, you need to try their outstanding sandwiches and some of the best ales and beers.

They now have two Charlotte locations and are always ready to launch a new beer or ale, either available seasonally or annually.

This is one of the Charlotte breweries that experimented with beers and other beverages to add bold flavors and create fantastic drinks.

Wooden Robot Brewery is located in the South End, Charlotte. They make many of their original beers, ales, and pilsners by a mixture of drinks and ingredients like coffee, vanilla beans, and spices.

They also have a range of sour ales based on tropical fruits like cranberry, blueberry, raspberry, and other seasonal flavors.

You can never get enough of their drink called Good Morning Vietnam, a blonde ale with vanilla beans. It is a bold yet delicious drink to try.

They even hold weekly events like trivia nights, mini-marathons, and many other activities. You can also have food from the restaurants next to the brewery.

Lenny Boy Brewing Co., named after the brewery owners, is one of the Charlotte breweries with the most unique drinks to accompany you. You can bring your furry friends as dogs are allowed in this brewery.

They craft beer and brew kombucha alongside selling and making wild ales and sour ales. If you want to cut back on your alcohol consumption, you can buy their kombucha, a non-alcoholic drink.

They sell various Kombucha flavors, ranging from regular flavors like lavender, ginger, and strawberry to bold flavors like elite beet and lost rose.

Their beer collection is equally impressive as they make some with tropical flavors or sour flavors, which leaves a good mouth taste after you drink it.

Opened from Tuesday through Sunday, many weekly events occur like trivia nights, growler fills, and others. You can also book them for private events. Even home delivery of their drinks and food is available. 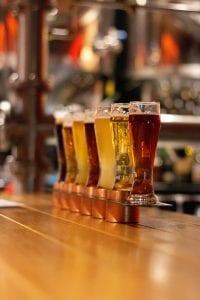 Another one of the Charlotte breweries from Plaza Midwood is Resident Culture Brewery. This brewery has made a name for themselves through their unique and diverse collection of pilsners, beers, ales, and wines.

Their drinks are quite impressive and new to the locals. IPA like Electric War, Iconic Anonymity, and others are quite popular among the crowd. Their lager beers are hyped and have become quite well known.

Being one of the newest Charlotte breweries, it gives stiff competition to other local breweries and has made its name.

Last but not least of all the best Charlotte breweries, Sycamore Brewing is a community favorite brewery which offers beers, bubs, and coffee.

Their craft beer is fresh and has a comfortable taste, welcomed by beginners and experts of the beer world. Among the best-sellers you can get are Mountain Candy, Southern Girl Blond, and Juicyness IPA.

Bubs, which are hard seltzer naturally flavored. The flavors include Juicy Peach, Pink Cherry Lemonade, and various other tropical combinations and flavors.

This is one of the very few breweries where you can get a can of coffee. They named their coffee brand Beach Shack coffee and provided Charlotte’s best cold coffee brew can. All the coffee beans are locally sourced.

Their production is relatively environmentally friendly. You can bring your friends and family to have a drink and chat while having snacks. Even a non-drinker can enjoy their good can of cold coffee.

Just remember you need to be 21 years old or above to drink beers and other beverages. Drink responsibly and have an excellent time. Most of the beers in these Charlotte breweries range from 6 dollars to 20 dollars according to quality and quantity.