Australia is the world’s 6th largest country in terms of total area. While visiting Australia, you will come across plenty of landmarks & tourist attractions, be it man-made, or natural.

The country is filled with breathtaking landscapes, heritage sites, and outdoor experiences. This is the country where you will find the top UNESCO world heritage sites. But before checking out the landmarks, let us know a bit more about visiting Australia.

Australia is massive. And it’s obvious to get carried away when visiting such a beautiful country. So, there are some crucial things you should know before visiting Australia:

Now that you are aware of the important things let us move to our Australian landmarks article without any further delay. 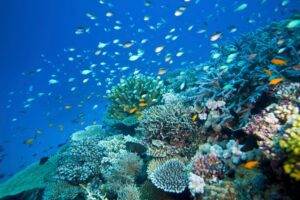 It is a UNESCO world heritage site since 1981 and currently the world’s longest & largest coral reef. The reef comprises a myriad of marine life, including over 15,000 different species of fishes, turtles, sharks, whales, giant clams.

It consists of about 300 separate reef systems and 900 beautiful continental islands. The reef expands in a Northwest-Southwest direction for more than 200 km.

There are various ways to enjoy this marvelous beauty; you can swim through the clear blue waters or take a scenic flight for a birds-eye-view.

Port Arthur is a historic site located on Tasmania island, an hour’s drive from the city of Hobart. Originally Porth Arthur was a timber station that was established in 1830. However, later on, it was converted into Australia’s largest prison colony. 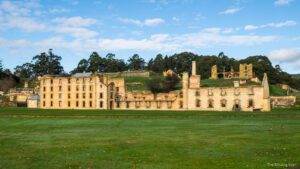 At present, the site is considered among the most historical sites in Australia. Visitors can learn all about the history & past lives of convicts here.

It is one of the most famous convict sites. And it was known for having the toughest punishments in the country. The historic site now comprises a prison museum, a convict church, a souvenir shop, a cafe, and a separate prison for punishments.

The 12 Apostles by the Great Ocean Road in Victoria is a collection of limestone pillars, standing among the must-visit Australian landmarks. 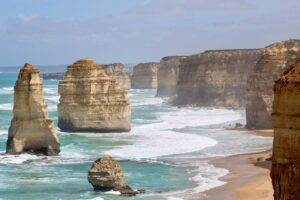 The rock formations are over 15-20 million years old, rising out of the Southern Ocean. It is believed that waves & wind carved them into caves & arches first and then to the 150-foot tall pillars that they are now.

The best way to get the most exciting experience of the 12 Apostles is by getting on a scenic helicopter flight and enjoy the panoramic views. You can also hike along the Great Ocean Walk or get to the viewing platform.

The Sydney Harbour Bridge, also popularly known as the “coat hanger,” is one of the most iconic Australian landmarks. The bridge was built in 1924; however, it was not opened until 1932. 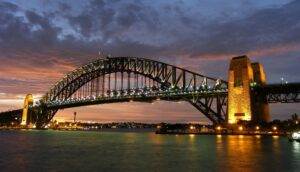 The Harbour Bridge is the largest steel arch bridge in the entire world, with a height of 135 meters. For stunning views, adventurous visitors can climb to the top of the bridge following 1,000 steps.

Mount Kosciuszko, located in Kosciuszko National Park, South Wales, is the highest mountain peak in Mainland Australia. The mountain sits at the height of 2,228 meters above sea level. 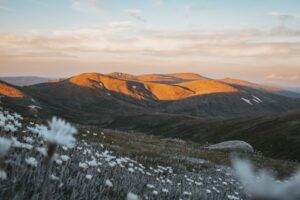 The best way to enjoy the mountain is by hiking during the winter December-March when the mountain is fully bloomed with wildflowers. There are two ways for visitors to reach the mountain, the first is the Charlotte Pass, and the other is the Thredbo trail.

Kakadu National Park is another one among fascinating Australian landmarks situated in the Northern Territory. It is a biodiverse nature reserve comprising of wetlands, rivers & sandstone escarpments. 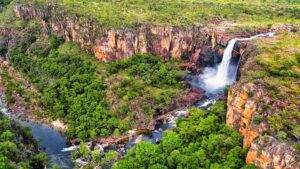 This is the country’s largest National Park covering an area of 20,000 sq km. This national park offers the best chance at exploring nature & Australia’s ancient cultures.

Kakadu National Park is known for the richness of its Aboriginal sites, as there are over 5,000 Aboriginal rock arts.

The white-sand Bondi Beach is Australia’s most iconic beaches and one of the tourists’ all-time favorite Australian landmarks. 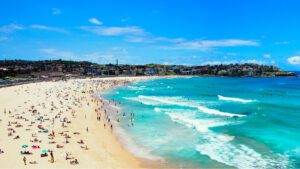 The beach is about 7 kilometers from Sydney’s city center and is stretched for about 1 kilometer. The curling waves of Bondi Beach are what sets it apart from other beaches. It has the ideal waves for the best surfing experiences.

The beach is even the best destination for sunbathing and coastal walks. Visitors can also have a good time watching whales & dolphins. And if that doesn’t do much, there are cafes and golf courses to make things better.

The Bungle Bungle range nestled in the Kimberley region of Australia within the Purnululu National Park is one of the fascinating geological Australian landmarks. 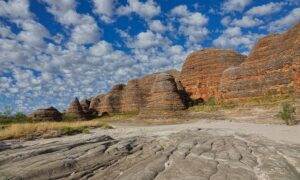 The Bungle Bungles are karst sandstone domes that take the formation of “bee-hives,” or that’s how they look from above the sky. The domes are at a rise of 250 meters above the grasslands.

The Blue Mountains, known for their rugged scenery, are a range of mountains in Australia’s South Wales. The mountainous region comprises 1 million hectares of tall forests, cliffs, canyon & beautiful waterfalls, making it another one of the most visited Australian landmarks. 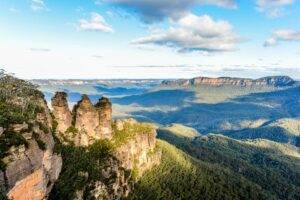 The region is at about 2 hours drive from Sydney, and visitors can reach there via car, coach tour, or train. And the mountain has plenty of walking & hiking trails, taking the visitors through caves and gorges.

Visitors are often enchanted by the natural beauty this region possesses, with a never-ending stretch of eucalyptus trees. You can even take a guided tour to get the most of the area.

The Pinnacles Desert in Nambung is among those Australian landmarks which are a must-visit. The Pinnacles are limestone formations formed 25,000-30,000 years ago. 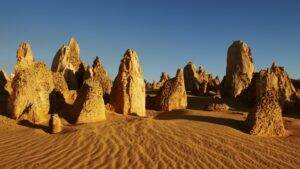 The park covers roughly 17,000 hectares of area and is home to a large number of native birds & animals. The Pinnacles are not all of the same heights, some stand as high as 5 meters.

The Kings Canyon is a canyon within the Watarrka National Park, located in Australia’s Northern Territory.

Visitors mostly go to Kings Canyon to catch the sunrise from the top or have dinner under the stars at the on-site resort. There’s the Ayers Rock Resort offering thousands of experiences & adventures daily on their menu.

Or try hiking the Kings Canyon Rim Walk, which is a challenging 6 km track.

The Sydney Opera House in South Wales is a performing arts theatre. The building is one of the most iconic Australian landmarks. 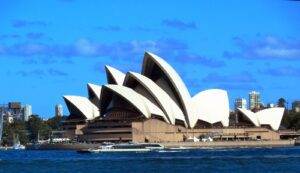 The Opera House was listed as a UNESCO World Heritage Site back in 2007. It hosts over 40 shows a week and comprises many performing venues.

For visitors, there are regular guided tours which can also be booked in advance. From music to plays and food, there’s everything in here. The building itself is worth more, and it is one of the 20th century’s most famous buildings.

The Kangaroo Island, located southwest of Adelaide, is the third-largest island of mainland Australia. 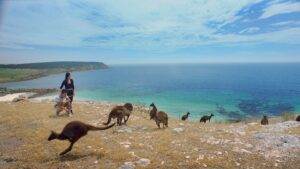 It is one of those Australian landmarks that you absolutely cannot miss. The experience visitors have at Kangaroo Island is otherworldly. The island is most popular for its wildlife and wine tours.

Visitors can enjoy sunsets, pristine beaches or spend time with the wildlife. You can even get a glimpse of endangered sea lions in their natural habitats.

Australia is a country full of wonders & experiences, and that is why it gets millions of visitors every year. In this article, we have listed 13 of those Australian landmarks which are the most popular worldwide and have the maximum number of visitors.

However, the list doesn’t end here; there are far more landmarks to visit in Australia. Such as Shark Bay, Tiwi Islands, Kimberley Coastland, Horizontal Falls, Parliament House, and many more.

I hope you enjoyed reading this article on Australian landmarks. And hope it will be of help to you while you visit Australia. If any other landmarks should have been mentioned in this list, please let us know your views.