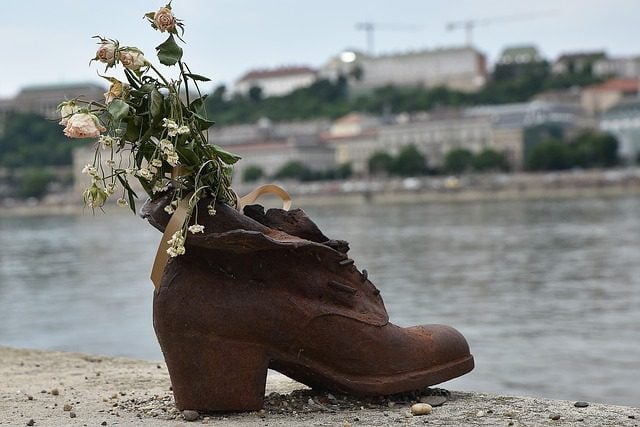 When you think of fashionable French shoes today, you probably think of elegant evening heels and beautiful ballet flats. However, 18th century shoes looked very different to the sleek, minimalist designs we are used to today.

18th century shoes have a rich history not just in fashion but in democracy. Surprisingly, these opulent shoes are deeply intertwined with the French Revolution and the origins of democracy in the Western world. To understand how these shoes fit into the revolution, keep reading “18th Century Shoes: Elite Fashion for the Revolution.”

What are 18th Century Shoes?

18th century shoes, like most fashion from the decade, were characterised by opulent embroidery and prints. The shoes fit into the larger fashion and art movement, know colloquially as Rococo. Under Rococo, there is no such thing as too much!

18th century shoes have three defining features: a flared tongue, narrow and pointed toes, and a high throat. The heels were short, curved and chunky both for men and women. The style of the heel is comparable to modern Luigi XV, whereas the body of the shoe is closer to a loafer.

Canvas, silk, linen, and even wool were common materials used to embellish the shoes. Floral motifs were popular among noblewomen at the time, possibly due to the rising interest in exports from India.

Men, on the other hand, had somewhat muted designs on their shoes. 18th century shoes for men often had bright red heels, contrasted with plainer fabrics. The style was inspired by the Parisian courts of the time, proving once again how influential France was to 18th century fashion.

Brass buckles became fashionable towards the end of the century as they added an extra layer of sparkle and shine to the footwear. However, the buckle did tend to conceal the beauty of the fabric, so it was only added to 18th century shoes with simpler designs. The more elaborate brocade and embroidered shoes used the traditional ribbon closure system.

18th century shoes may seem like bold statement pieces, but they fit in perfectly with the fashion from the century. Compared to the extravagant dresses and coats of the 1700s, these shoes seem relatively tame!

To help us contextualise 18th century footwear, let us look at some of the other fashion from the decade.

You may have seen images of old dresses with ridiculous circumferences. Well, those dresses were the pinnacle 18th Century Rococo clothing.

Robe a la Francaise, which translates to “the French dress, ” is perhaps the most recognisable silhouette in fashion history. Robe a la Francaise originated from the royal fashion of Versailles. This French fashion represented everything the nobility of France stood for: excess, exuberance and expense.

Robe a la Francaise is most notable for its dramatic hip pleats. The hips of the dress could almost be mistaken for a shelf or a small side table rather than a collection of fabric! As a result, these dresses required enormous amounts of fabric to create. Since the French nobility settled for nothing less than the finest silk and jacquard for their dresses, we know that the Robe a la Francaise came with a hefty price tag!

The Robe a la Francaise was often paired with striking jewellery. Women would wear lace chokers fitted with a single, teardrop cut gemstone in the centre. The more expensive jewels may have been beset in gold or silver, but lace was a common alternative.

While men’s fashion from the time was nowhere near as exaggerated as the Robe a la Francaise, it still had the characteristic exuberance of Rococo style. The Habit a la Francaise was the typical outfit for French nobility in the 1800s. The costume consisted of a coat, waistcoat and breeches, each tailored to perfection. Fabrics were often bright and eye-catching, and men did not shy away from accessorising. Feathered hats, lace neck scarves and bejewelled buttons helped round out the look.

Lace was an essential material for both male and female attire as it helped embellish the nooks and crannies not covered in silk and brocade. After all, Rococo fashion demanded every inch of the body be decorated by the finest materials one could obtain.

The bold and striking look came to be a symbol for the problems in France during the time. To understand how this article of clothing became one of the many symbols of the French Revolution, let us look at a brief history of 18th Century France.

Fashion and the Revolution

Before the 18th century, France was notoriously the capital of high society. Europe praised France for its refined culture, extravagant art, and trendsetting fashion. However, the thing France was most renowned for was their lavish nightly parties. Versailles would light up every night, and royalty from across Europe gathered to partake in the revelry.

Versailles never shied away from grandeur. Expense seemed no problem to the King and Queen, who taxed the poor French peasants relentlessly to finance their egregious lifestyle. To the nobility of France, high living and fine dining were more important than the welfare of their subjects.

Rococo fashion embodies many of these priorities. The Robe a la Francaise seems like a waste of money and fabric when you consider how much just one of those dresses cost the taxpayers.

18th Century shoes were perhaps the most offensive of the Rococo garments. To the peasant classes of France, it was infuriating that the nobility were covering the bottom of their feet with fabrics that cost the taxpayer half their livelihood! It was almost as if the nobles were mocking their tenants by wearing such excessive garments.

In the years before the 18th century, the nobility got away with their reckless spending habits. However, the 1700s were a time of economic ruin for the nation. Harvests had failed too many times, and the French people were suffering as a result. In this time of hardship and compromise, Versailles partied harder than ever before. Needless to say, the people were not too happy about this!

It is during this time that the peasant classes (known at the time as the “third estate”) bore a growing resentment for King Louis XVI ( or King Louis the sixteenth) and his wife, Marie Antoinette. Antoinette bore the brunt of the blame as the third estate loathed her. She was satirised and vilified across France.

The popular quote ‘let them eat cake’ was actually taken from a satirical account of the queen. The tale was that Marie Antoinette, when informed that her subjects were starving because they couldn’t buy bread, remarked “well then let them eat cake.” The story was written to represent the royal consort as immoral, insensitive and unintelligent.

In other words, the French hated Marie Antoinette from the tip of her powdered wigs to the soles of her 18th century shoes!

The hatred towards Marie Antoinette proves one thing: Fashion was integral to the animosity between the third estate and the nobility. Marie Antoinette embodied all the problems the working classes had with their leaders.

That is why it is unsurprising that the French Revolution radicalised Europe, and later, the entire world. As Versailles danced in fancy 18th century shoes, the third estate laced up their leather shoes and marched to Versailles. By the end of the 18th century, the French monarchy had fallen, and the seeds of democracy had been sown.

The 18th century is famous for Rococo fashion and the principle that bigger is better. Excessive spending, opulent fashion and disdain for the taxpayer were defining facets of 18th century French culture. 18th century shoes were perhaps the best examples of these principles. The level of detail and decorum in the shoes exemplifies just how much wealth the nobility had.

18th century shoes also highlighted the enormous wealth gap between the different estates. Silk and satin may have been the fabric of choice for the elites, but the third estate got by on worn leather soles.

18th century shoes hold a rich history within them. In the tapestry of the footwear, we can read the story of a Nation’s rise, fall and rebirth. When you look at the stunning shoe designs of French Monarchs, you see the tale of a great nation, powerful and mighty.

So the next time you see a pair of 18th century shoes in a photograph or museum display, be sure to take a good look at them. Observe carefully, for there may be stories hidden within the brocade just waiting to be told.

That was our article on 18th century shoes. If you liked this piece, be sure to check out more articles like this.