No, you did not read it wrong! And No, I did not write it wrong!

Delhi hosted its 4th literature festival today, and I won’t blame you or anyone else if you didn’t know that something like this has been happening in the very Capital of our beloved country for the last three years (thanks to the poor marketing by the organizers, pfft!). 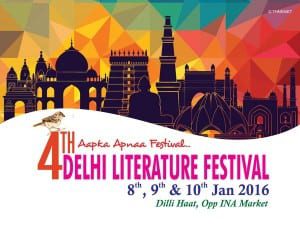 Well, let’s move on to the fest itself. The three-day affair is being held at Dilli Haat and sponsored by the big shots of the publishing world like Harper Collins, Penguin Random House, Speaking Tiger, and Om Books International. 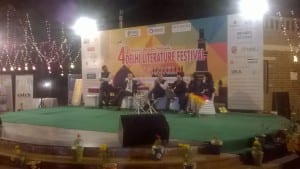 Vital impediments raised in the discussion were:

“Where does Indian Literature stand currently?”

Concerning this, Dr. Evans commented that India has ‘a fizzy environment’ when it comes to writing. As a result, the world is witnessing an eruption in the number of Indian literature being produced. The Publishers on the panel, too, added that they receive over 100 manuscripts daily, from which magnificent gems emerge. However, Mr. Bahri accurately pointed out that, these days, most writers create works with Bollywood in mind. Hence, most manuscripts end up being film scripts.

“Where are the readers coming from, and what are their preferences?”

Ms. Debashree Rakshit admits that a major percentage of the readership comes from the youth. Although there is a market for all genres, there is a greater appetite for fiction. Ms. Mathur credits the proliferation in the readership to the expansion in the mediums of accessing a literary text (eBooks, audiobooks, etc.).

“What is the need for a literary agent?”

An agent, for Mr. Bahri, is like a dam who sifts out the gems amongst the herd and polishes them.  Although consulting agents is a new trend in India, none of the publication houses accept entries directly from the writers in the West. Although Harper Collins encourages direct submissions and helps the authors publish them, Penguin India gives precedence to those that have come through agents, as noted by their respective representatives.

“What is the future of translated texts?”

The task force unanimously agreed that translations would take Indian literature to a new scale altogether. Given that the translator puts their heart into their efforts and really owns the book to prevent things from getting lost in translation. 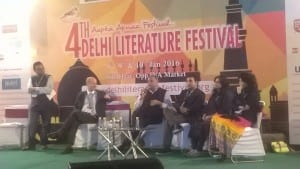 In the midst of the discussion, with the curiosity of a diplomat, Dr. Evans asked his fellow panelists if they can always spot a winner. The answer to this was that a good book will always remain a ‘good book’ and will indeed be spotted. The question is, by whom. While some may overlook its greatness, it will definitely find its place in the rightful publishing house.

The elaborate discussion was a truly enriching one for anyone zealous towards publishing and writing.

Don’t feel too bad if you missed out on the fantastic start, and there’s still time for you to catch the exciting upcoming events on the remaining two days starting from 02:00 pm.

The festival is an essential step towards making Delhi a city that is about something more than just food, catering to the many intellectuals who live here. Therefore, I hope organizers employ serious efforts towards improving their marketing strategies and expanding the scale to make it as majestic and august as the one convened at Jaipur.

So go on and treat your creative mind this weekend at the 4th Delhi Literature Festival!

A Tribute To Saroj Khan: The Legendary Choreographer

Children Pool up Savings to Feed Stray Animals in Dehradun

All The Reasons Why We Absolutely Love Emma Watson

Breastfeeding: The Top Myths and Realities