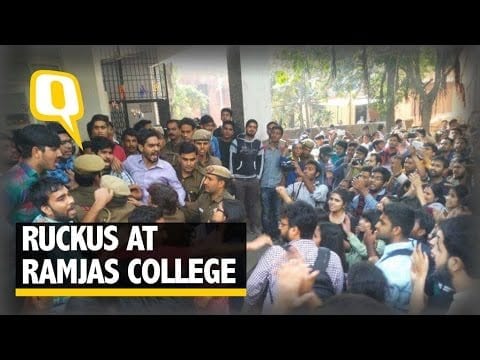 Ramjas College, one of the three oldest colleges of University of Delhi in North campus has been the talk of the country for the past two weeks. Every news channel, newspaper and social media site is filled with reports and news on the Ramjas College violence.

The root cause that triggered the whole chain of events at Ramjas college (DU) was -the invitation to JNU students Umair Khalid , who was accused of raising anti-India slogans at an event in JNU last year and Shehla Rashid, the ex-vice president of students union (JNUSU) to speak at a seminar “Cultures of protests” at Ramjas College. Following violent protests by members of ABVP and students union, this seminar was cancelled and the invite was withdrawn. In the view of seminar being cancelled, a peaceful protest was organized by AISA and other students of Ramjas College to Maurice nagar police station on Feb 22, demanding action against the alleged violence inflicted by BJP backed ABVP and disruption of seminar. This protest turned violent as clashes broke out between All India Student Association (AISA) and ABVP. AISA students alleged ABVP Of surrounding them and hindering their march. Dozens of students and journalists were hurt. A professor Mr.Chakravarthy was also attack by the mob during the protest.

Police officials were accused of supporting ABVP and not taking any action against them while they were disrupting the protests. A protest against the mishandling of situation by police was also demonstrated outside the police station at ITO. Tons of questions along with the protests forced Delhi Police to suspend three of its personnel for their “unprofessional” conduct. Eventually the case was handed over to CBI under tremendous pressure. One person who became a trending name during this issue was LSR student Gurmehar Kaur, daughter of a Kargil martyr who instigated a social media campaign against the bullying of ABVP. Due to her placards the focus scanned over various issues like ‘anti-national views’. She even got rape threats which again raised the issue of ‘women safety’ in our county. Two members of ABVP, Prashant Mishra and Vinayak Sharma who were arrested for attacking the group of AISA supporters have been suspended from RSS backed-outfit for their act of indiscipline. The excessive trolling, the rape threats and pressure made Gurmehar Kaur eventually quit the campaign and leave the city. The whole chain of incidents at Ramjas college has clouded the social media with comments and views of supporters and non-supporters over issues of anti-national comments, Freedom to Speak, Women Safety, and Misuse of armed forces Sacrifices. Many people like cricketer Virender Sehwag, Actor Randeep Hooda, Javed Akhtar, Wrestler Babita Phogat, Activists Umair Khalid, Union Minister Kiren Rijuju, MP Rajnath Singh and more have been in limelight for their views and comments on social media. As this current issue bothers the nation with the chain of incidents following it, it pokes us with a box full of concerns-Is the Right to Freedom of Speech misused in this issue or misunderstood? Are the political parties, created for our well-being bullying us into believing in their beliefs? Are the youth leaders resolving to violence as the sole and ultimate solution? Is rape so common in our country that people are giving rape threats on social media? Is our legal and judicial system so weak? What stopped the police from interfering which could have minimised the violence?

A college brawl which turned into a full-blown nationwide concern has not yet been resolved. Protests, rallies and anti-protests will continue this week as the issue continues to boil over with no near-sighted end.