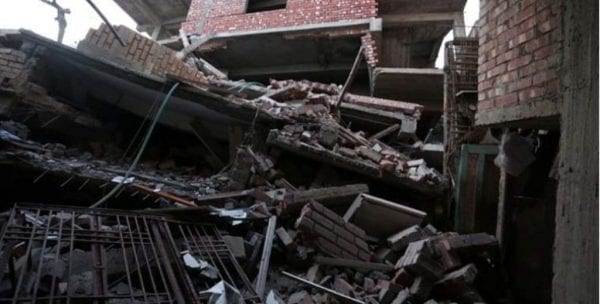 Before dawn today at 4:35 am, the north-eastern part of India got struck with an earthquake of 6.7 intensity on the Richter scale. Tremors started on Monday morning when most of the people were sleeping. At least 11 people were killed, and 110 were injured in the calamity.

The earthquake’s epicentre was in the Noney village of Tamenglong district in Manipur, approximately 35 km from Imphal. The vibrations were felt in Assam, Manipur, West Bengal, Jharkhand and Bihar. Nepal, Bangladesh, Myanmar and Tibet also went through the swings.

The effect of the earthquake was maximum in Manipur. Several buildings were damaged, and large cracks can now be seen on walls. The buildings in the market collapsed to the ground, and three people were killed in it. Some people were also injured in West Bengal in areas of Siliguri. 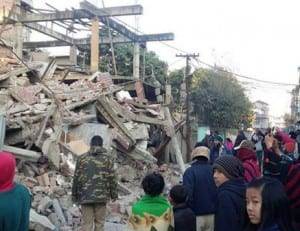 A man died of heart attack following the quake in Bangladesh border. Pictures were posted on social media which showed the long cracks appearing in many buildings. In Guwahati, people were seen running out of their homes to open spaces. The quake’s effect was so intense in this area because the buildings were “highly vulnerable to earthquake” besides they were built in the second most dangerous earthquake zone. This was analysed in the initial impact assessment of US Geographical Survey (USGS).

Help has been installed in the area as soon as the information reached Manipur government. Indian Army and Paramilitary started rescue operations around 9 am in the area. Two National Disaster Response Force (NDRF) teams of 90 personnel each has been instructed to rush to Imphal from Guwahati. 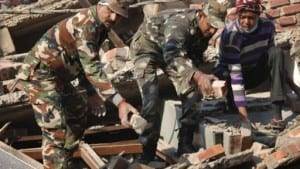 Also, National Crisis Management Committee has been instructed to review the situation. The tremors struck 17 km deep in the earth. Telecom connectivity in the area is still normal, but there have been regular power failures. Power supply to Imphal is totally blocked, but help has been sent to overcome the situation, and the Power Grid Corporation has been instructed to restore the backup. 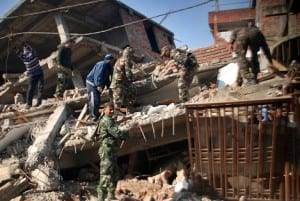 A special team of doctors also reached Manipur at 4 pm from Delhi. The team was sent by The Secretary of Health and Family Welfare Department. Prime Minister Narendra Modi has sent Union Minister Mr Rajnath Singh to check up on the relief measures. He is on the Assam tour and also felt the quake while he was in Guwahati.

Tweets with #ManipurEarthquake have been flowing all day on Twitter as the whole country is supporting North East India in this horrible situation. Helpline numbers were issued around 3 pm from various NGO’s and Government authority. 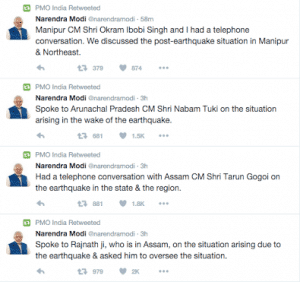 Its the third earthquake in the Northern part of India in the last three months. This increasing toll could be a sign of an upcoming danger. Authorities have issued a red alert and said that they are ready for any such situations.

It will take Manipur some time to heal and it’s getting support and help from all parts of the country. Hope Manipur will recover from the loss very soon!