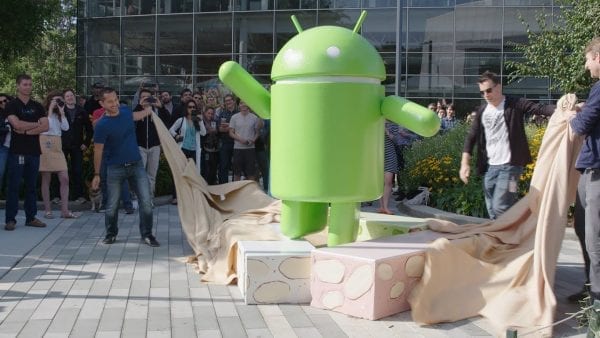 Yes the latest version of google’s android version 7.0 is called Nougat following their tradition of  keeping names of sweets always. There was much anticipation for this version’s name as google wanted its users to select the name. Suggestions poured in from all over the world with names like Nut, Nutella and Neyyappam- an Indian sweet dish name. Probably if the whole population of India had voted for it, the new name would have been Neyyappam.

Nutella was the most expected name but Google had surprises. Finally the android mascot was unveiled with Nougat boxed below it and was welcomed lovingly by everyone. Fans have already started guessing the name of the next version which would start from O and yes you got it right, OREO is the expected name. We hope we are right this time. The major features of Nougat are a VR mode and a battery saving feature called Doze on Go which allows a phone to conserve power while its in the pocket. The features are split-screen multi-tasking, faster switching between apps and grouped notifications from a single app.

Android N is currently in the hands of developers and will be rolled out to a wider audience in the fall.

We definitely can’t wait to use this Android version. Nougat at its best.