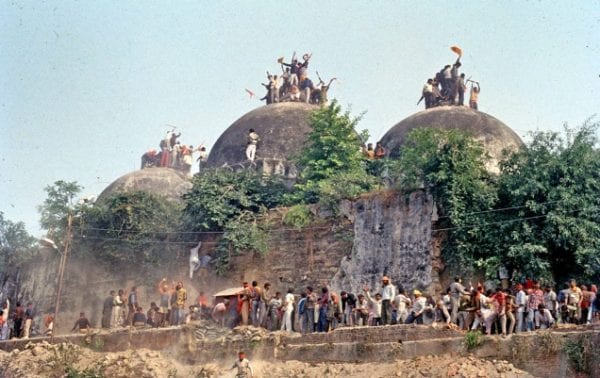 The date holds a sad history. Demolition of a site that had existed since the Mughal era. Riots killing about 2000 people, maybe more. Estimates are just estimates, right? What all has happened in the years ever since that huge demolition happened when our country just somehow understood that Hindus and Muslims can somehow never bear even the sight of each other. Babri Masjid was constructed under the order of the Mughal Emperor Babur in 1528, and was obviously, named after him. For centuries, the placed was used both by Hindus and Muslims alike. But, during the 1990’s, rumors had surfaced regarding the land belonging only to Hindus as the site had a Hindu Temple before the Masjid. The name of the city was enough proof for them, Ayodhya or as they call it Ram Janmabhoomi.  Supreme Court had issued an order that nobody should be hurt in the protest but we all know how that went down. The Mosque was demolished by the activists. People was hurt, even the ones who had nothing to do with any of it. Several riots over a span of cities and too many deaths to count later, the Allahabad High Court took a decision in the year 2010 and divided the land into three parts based on the excavations done by the Archaeological Survey of India.

The incident taught at least one thing to every Hindu and every Muslim in our country. Never trust the “other religion” people.

“They demolished our place of worship, who knows what else they will do.”

“They kill in the name of religion, who knows what they will do.”

Sounds familiar, doesn’t it? The court really had to divide the land in order to stop the barbarism that happened over a place of worship in a land of another God. Another God! Does anybody even know how ridiculous that sounds? All our lives we’re taught that there’s just one God but what our teachers fail miserably to tell us is that that there’s one God, for every religion. And fighting over it, is the most humane activity of its followers.

I simply can’t wait for the day to come when each one of us will have a piece of land for ourselves and our country would cease to exist.  There would be no unity, no diversity. Just a bunch of like-minded people who happen to run behind the idea of a “faith”. 23 years, folks. 23 years and we haven’t learned anything. It takes us a flood like the one in Chennai to realize that religion does not matter, God does not matter. What matters is how you treat the people who you claim to have been created by Him. There are Muslims in a Temple and Hindus in a Mosque. There’s a Hindu girl named ‘Yunus’ because a Muslim man with the same name helped the woman who was about to deliver. There’s a reason why, every time these days an individual prays for our country, they pray for calamities like these. Because these are the only times we are true to our nature. We become what we have always pretended to be in utter normalcy. We understand that this is not how it works. This is not the way. And yet, we still don’t.

Seeing how far we have come, in these 23 years ever since the demolition happened and the Hindu-Muslim rivalry strengthened, I believe we deserve more of Chennai and less of Babri. At least we get to see the God in others we keep looking for in pieces of lands.