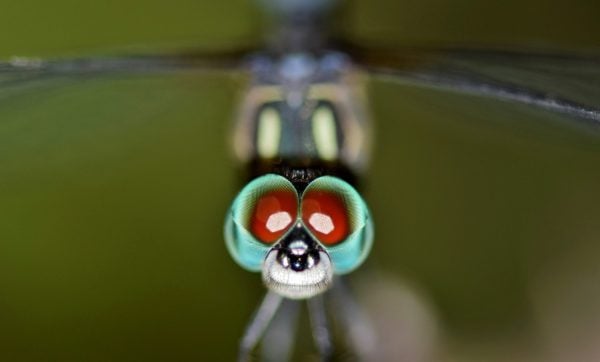 Insects’ eyes are with the most exquisite colorations, detailing and not less than a highly specific modern age optical device. Very few people are aware of the amazing and marvelous structure and characteristics of the eye of insects.

The overall structure and vision vary from insect to insect in many aspects. If you imagine a fly like a dragonfly or fruit fly under a microscope, you will really get to know about the amazing characteristics of an insect’s eye.

Difference between the Human’s Eyes and Insect’s Eyes: 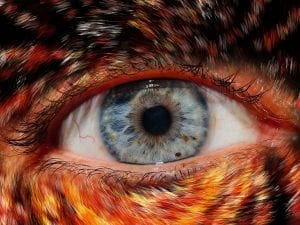 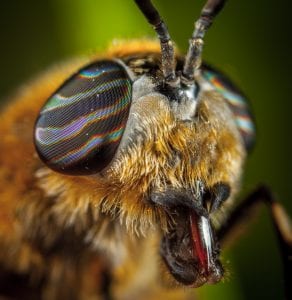 The human eye possesses a single large lens, whereas insect eyes have many small lenses, having one lens per eye known as ommatidium. In compound eyes, the visual acuity is depended on the number and size of the ommatidia in the eye. Though The quality of human vision is much higher than that of a compound eye, it has a much more complex construction.

The lens of each ommatidium in the insect’s eye focuses light on a few light-sensitive cells without any adjustments. In contrast, in the human eyes, the iris adjusts the amount of light that enters the eye, small muscles focus the lens on the eye’s subject, and a large number of light-sensitive cells work together to form an image.

There are many interesting and jaw-dropping facts about the eyes of these tiny creatures that you would love to know. So, let us begin this fascinating discovery.

Among all the insects, most of them have a pair of compound eyes.

What are Compound Eyes?

Compound eyes are the structure of vision in the arthropods. Compound eyes are made up of thousands of tiny hexagonal tubes known as ommatidia. Each eye has its own lens in the front and a cluster of light-sensing neurons at the back, making a network form the vision. However, the compound eyes do not form an image like the large lens eyes of humans, but a “neural picture” is formed by the ommatidia, which contains photoreceptors.

The photoreceptors say for in fly compound eye receive feedback from the second-order cells through a lamina network. This is also part of what can be called network adaptation, where the neural elements located downwards from photoreceptors change their function according to the input properties. This improves the transient performance of the visual system.

The ommatidia also vary in size and shape. For dragonflies, they are large enough to afford easy observation through a compound pocket lens. Still, other insects possess a much smaller size, which is troublesome to observe with the same instrument.

The number of facets varies from as much as ten thousand in each eye of a dragonfly while just a few hundred in the eye of Hemiptera.

Insects like locusts have a special system to avoid collisions and detect objects approaching them, which helps them in their flight and many other works.

A transparent film of nerve tissue that coats the insect eye shell’s inner surface, which is merely a thin crust, convex externally much like a fibrous tissue. The insect’s eye facets remain plain as earlier, even after dissecting the eye and removing the fibrous tissue. This fibrous tissue film serves not only as a diffusive substance, but it carries signals related to the vision to the central spinal ganglia.

The ommatidia of the insect’s eye are the most important feature. It helps the insect form a clearer vision of the objects and helps in proper decision-making. The ommatidia located in all directions like forwarding, backward, lateral, and posterior plays a role in acquiring vision from all the directions. That means many of the insects get a 360-degree view of their surrounding, which is all that they need to make a fight or flight decision.

The amazing structure and arrangement of the ommatidia is the best thing about an insect’s eye. However, not all insects possess this good trait. Some insects, for instance, Ants, have terrible eyesight compared to others. They generally decide based on their odor sensing capability, which is very much nice developed in Ants. At the same time, the bees master the field of vision. They have very well developed eyesight, which generally helps them differentiate between friends and foes.

Because of the insects’ 360 degrees view, it isn’t easy to catch a butterfly, dragonfly, wasps, and many Beatles, which you must have experienced many times. The specific arrangement explains it all. They can see you approaching from any direction.

For the honey seeker insects out there, vision also plays an important role along with the odor. A honey bee will definitely choose a bright yellow colored tulip to get the nectar than the green flowers of mulberry, hackberry, or orange. Insects find bright and various colored flowers more attractive than the flowers which are not that colorful.

The human eye works more like a camera with a pupil, iris, and cornea, but the image formed by an insect’s eye is not clear, but it has a wider view.

Many insects can see ultraviolet light. Flowers have ultraviolet markings that are visible to pollinating insects but not to humans.

Among all the arthropods, we are very familiar with very few of them. Let us know more about the vision of these tiny creatures. 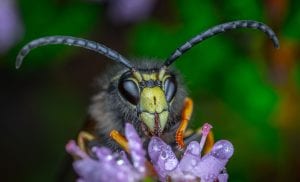 Bees have three eyes. Yes, you read it right. This tiny creature has three eyes to help in its vision.

Along with Bees’ two large eyes on either side of its head, a bee has three ‘simple’ or ‘ocelli’ eyes on the top of its head. These detect light so that a bee can sense if it is being approached from above by a predator.

The Bee’s two large compound eyes specialize in seeing patterns, shapes that can help identify plant types and other bees. The compound eyes of bees have hairs growing on them to assist with wind direction.

Humans can detect movement happening for longer than 1/50th of a second. But Bess has the capability of movement detection occurring in 1/300th of a second. due to this, a field of flower may seem still to a human in the low breeze, but bees can see the flowers swaying even due to the tiniest way.

Bee’s eye is more sensitive to purple and blue. These colors appear more appealing to the bees. They are said to be the bees favorite colors. It is due to the amazing relationship between the bees’ eyes and the flowers.

Flowers have the capability of reflecting ultraviolet light, which is identified by the advance built bees eyes. 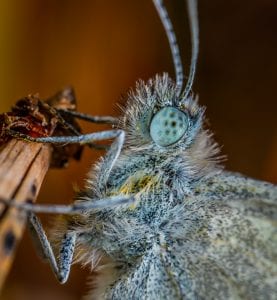 Butterfly eyes are made up of a much smaller image, forming eyes called ommatidia. The butterfly eyes are capable of viewing 314 degrees of the image surrounding itself, which helps it see food sources, water sources, and keep an eye on the predators.

Similar to the bee, Butterfly eyes are unique and function differently compared to the human eye. The different colors and patterns that butterflies can see are invisible to the human eye because their eyes are very accurate at spotting fast-moving objects. They can distinguish ultraviolet and polarised light.

Butterfly eyes are made up of a much smaller image, forming eyes called ommatidia. One of these eyes’ main advantages is that it provides the animal with an increasingly wide field of vision. In fact, it is said that a butterfly can see approximately 314 degrees around itself. This helps them identify potential predators and food or water sources.

The butterfly eyes are attracted to the glowing pink and red colors flowers. 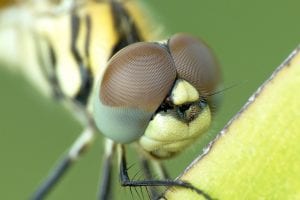 Dragonflies have two large compound eyes, each with thousands of lenses, and three eyes with simple lenses just like a bee. The photoreceptors located on the retina collect light and send information about the visual scene to neurons, which further process the vision’s information.

Dragonflies use light information to stabilize their flight during the day. Thus in many places, dragonflies’ vision is very much similar to that of a bee.

Surprisingly, even this tiniest creatures have these huge ranges of variety in their eyes. Each creature on the earth has been provided with the aids of protecting itself and the ones that help that creature survive.

Insect’s eyes are completely different from those of the vertebrates. The vision that is, insect’s impactnalimact is a different roman renfroman that of humans, and this difference is a great wonder to us.

Even when they are different from human eyes, they work perfectly to serve the insects’ needs.

The complexity of these jewels serves to increase the curiosity of our human brains. There is a lot more to know and explore about these tiny gems.

Tell us below in the comment box if you know any such facts about these tiny jewels that are the wonders of the insect’s eye.