What are the Northern Lights?

One of the very breathtaking astronomical phenomena, Northern lights are shafts or curtains of colored lights visible on occasions in the night sky. Seeing northern lights with your own eyes—flashing, weaving, and pulsing across the starry sky—it feels no less than pure magic.

Northern lights Minnesota are renowned as they offer polar lights chasers a supply of numerous spots to witness the beauty in its rawest form.

This is truly an inspiring natural phenomenon; Polar lights (alternative name for Northern Lights) can be found in both hemispheres – Northern and Southern. They are known as ‘Aurora borealis’ in the north and ‘Aurora australis’ in the south.

Here, I brief you with an insight into how northern lights are generated.

How Are Northern Lights Generated?

The origin begins when solar activity ejects a cloud of gas on the surface of the sun. Scientists refer to it as coronal mass ejections (CME). These coronal mass ejections take about 2-3 days to reach Earth, and they collide with Earth’s magnetic field. If this invisible field could be seen, its shape would make earth look like a comet with a long magnetic tail, extending a million miles behind Earth in the opposite direction of the sun.

These currents then flow along the lines of magnetic force into the polar regions. The energy of these particles is boasted in the earth’s upper atmosphere. And on colliding with oxygen and nitrogen atoms, they produce dazzling auroral lights.

Among the varied colors reported, pale green and pink are the most common in Northern Lights, Minnesota. Shades of yellow, green, blue, and violet have also been reported. These lights appear in various forms, such as patches or scattered clouds of lights to steamers, arcs rippling curtains, or shooting rays that illuminate the sky with an eerie glow.

Pale yellowish-green, the foremost common auroral color, is produced by oxygen molecules located about 60 miles above the earth.

All red auroras, very uncommon, are produced by high altitude oxygen at the height of up to 200 miles.

Nitrogen is credited for producing blue or purplish-red aurora.

Having seen the stunning photos of the bright curtains of green, purples, and red lights in the night sky that makeup northern lights, you must probably be wondering what it is like to see that first hand.

Here I have some good news for you, catering the glimpse of Northern light is easier than you may think. You don’t need to be in Alaska, Canada, or Iceland. They are pretty much visible in the mainland United States, and Minnesota is one of the best dates to view them.

The aurora borealis has been seen as far down and middle of Ohio and Missouri, but they tend to extend further overhead as you move northwards.

Northern lights Minnesota are famous because of Minnesota geographic location. It amasses many lakes, making it an ideal location to see the northern lights’ sensational show, especially along its north and North Eastern borders.

Cook country is located on the Northern side. Owing to its Northern location and dark skies, tourists no longer have to travel to the Arctic circle to see aurora borealis.
Visitors can very often witness northern lights and Milky Way glistening over Lake Superior long the gunflint trail.

The grand Marius is a site of stunning night time views of the lights and day time in Lake Superior views. To better see the northern lights, you must plan your vacation for late fall or wintertime. It is also advisable to check the NOAA space weather prediction center online for the daily aurora forecast along with the general Grand Marius forecast. They project clear nights and early mornings for the best viewing conditions.

The jagged rock formations along the lake’s shore give the location its name, and these are popular with painters. Take a stroll through the Grand Marais Art colony, which is acclaimed to be the oldest in Minnesota. At the North house folk school, one could spot artisans immersed in traditional craft.

Grand Marais can also boast about offering all the beauty of a small harbor village, including a picturesque lighthouse.

Voyageurs National Park provides extensive views of the clear night sky is from its waterways. This location is so splendid that it found its way to the Forbes list of 20 best sites in the world to see northern lights in 2020. Situated high up near the Canadian border and at a far distance from artificial human-made light, it gives you some of the best views of northern lights Minnesota. Vibrancy and range of colors shine of the polar lights are reflected by miles of lakes.

Some popular locations to see them are Rainy Lake Visitor Center, Ash River Visitor Center, Voyageurs Forest Overlook Parking Lot, Woodenfrog Beach, and in campsites along the lake. To have an even worthwhile experience, it is recommended to rent a houseboat! 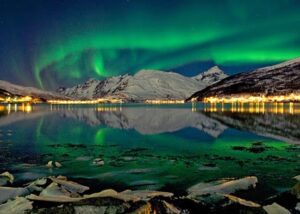 This location gives you a fulfilling 360-degree view at a higher altitude of 1400 feet. It is located outside the town of Lutsen over Caribou Lake. Take a short, 230-foot elevation climb to the rock overlook for the best views. Go across the highway and start hiking; keep right when the trail forks.

This city is in a remote northwestern corner and is away from the city lights, facilitating some of the most breathtaking views overhead. It is also an ideal location to take a vacation.

It is just 30 minutes from the Canadian border, so you can even consider taking a day trip to Canada.

One could go fishing or bird and most watching during the day and look out for the night lights.

This location is located about one hour north of twin cities. It has surprisingly less pollution, which makes for an excellent look at the light. You can see endangered species such as Sandhill cranes and the Blanding turtle while you’re there. 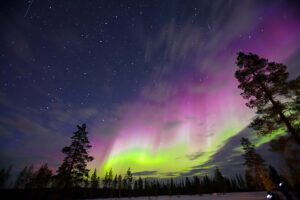 The early sunsets and long, star-filled nights of fall and winter are credited for making these seasons popular for northern lights Minnesota trips. Still, regardless of what you’ve heard and read, no single season is especially likely as a result of showing.

1. Since ancient times, Auroras have been reported.
2. The displays’ height can be up to 620 miles (1000 km), but most of them are between 80-120 km.
3. During high solar spot activity, which cycles over about eleven years, Auroras appear to be more regular and spectacular.
4. Yellowknife (Northwest Territories, Canada) is the capital for aurora tourism. 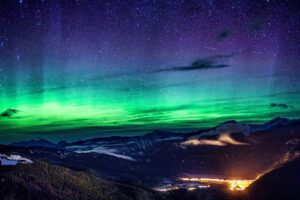 5. To describe the northern lights, stories abound in northern cultures.  Some North American Inuit name the aurora aqsarniit (‘football players’) and claim that the dead’s spirits are playing football with the head of a walrus. Legends also warn kids that the lights can come down and take them away.
6. Norwegian Kristian Birkeland, the “father of modern auroral science,” suggested the theory that electrons from sunspots triggered auroras, in June 1896.
7. The earliest known account of northern lights seems to be from the observations recorded by the official astronomers of King Nebuchadnezzar II, 568/567 BC, from a Babylonian clay tablet.
8. Some people claim to hear sounds associated with northern lights Minnesota (and otherwise too), but it has been hard to register this phenomenon.
9. Scientists have observed that in most instances northern and southern auroras are mirror-like images that occur at the same time, with similar shapes and colors.

Minnesota’s northern lights are notoriously hard to predict, but you can monitor these by the below-mentioned links. You will even be notified when the time is right.

You can also check out here.

Seeing Northern lights Minnesota in an activity one will undertake in one of the coldest parts of the mainland United States. Two of Duluth and Saint Cloud cities are among the top 10 coldest cities in the country. Watching lights during the cold winters and staying out can be hazardous. Ensure that you put on many layers of clothes unless you want to ruin the rest of your trip, by catching a cold.