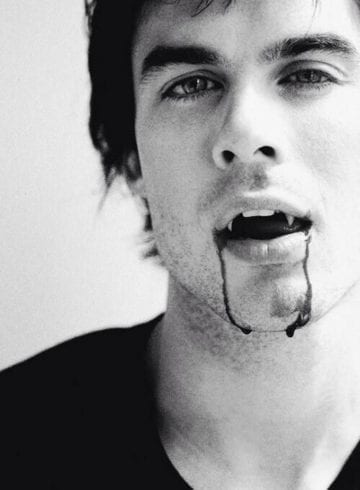 “I do believe in killing the messenger. Know why? Because it sends a message.”

Damon Salvatore: Vampire Diaries. Ian Somerhalder plays this blockbuster role. The character is nothing like a regular ‘nice guy.’ In fact, he is way past the average human life and its charades. I mean come on, he is a vampire walking the streets with a daylight ring!
Damon admits that he does whatever he wants to. and, does not care about what people see with their judgy little eyes.’  He goes around breaking hearts. He sheds blood without any thought. Yet, he has managed to rule the hearts of girls worldwide. also, he is growing his empire with a fanbase that grows bigger every day.
Damon turned into a vampire and left human life at the age of 25. His father shot him at the age of 25. Moreover, Damon turned off his humanity on the orders of Sybil in the seventh season. Let’s not even get into the already messy situation surrounding that. And get this, it is not the only time someone turned off his humanity!
That was one heck of a transition into a vampire! Buckle up, Vampires, for we have a list of 7 reasons why he is universally loved.
His relationship with all the other characters like Caroline Forbes, Matt Donovan, Sheriff Forbes, Alaric Saltzman, Stefan Salvator (played by our very hot Paul Wesley) is very interesting.
He became an internet phenomenon after terms like ‘Damon Salvatore sexy’ and ‘Damon Salvatore smile’ popped up in searches. Continue reading, and let us know what you think! It is not because girls have a thing for ‘bad guys.’ It is also not because he is gorgeous to look at. It is because he is beneath that exterior of a crazy, impulsive vampire from the TV series.
It is the character’s complexity that makes us love him and hate him at the same time. On the outside, he is a vampire on the dark side, far away from human life. But the person he is on the inside is exactly what we look for in a man.
Damon decided to live life like there is no tomorrow and also love like there is no tomorrow. How could we not fall for him? Stefan and Elena’s relationship was interesting. It made him jealous, and thus, he fell in love with Elena Gilbert. How can we forget his relationship with Elena Gilbert? His love for Elena Gilbert bloomed after his return to Mystic Falls, Virginia.
Damon’s return to Mystic Falls, Virginia was a heart-wrenching display of his love and devotion to Katherine Pierce. Who hasn’t watched the return to mystic falls episode on repeat? It was even more intense than his transition into a vampire.
You may have loved him in ‘You’re Undead to Me,’ where he mentally contacts Caroline Forbes in different places like the Mystic Falls High School. It’s what made Caroline Forbes come to the dungeon where Salvatore was locked in.
We came up with a list of reasons why we love this vampire. Also, we peppered it with some iconic dialogues of the so-called bad guy. Read on!

1. His looks are swoon-worthy!

“You know you were dreaming about me, explains the drool.”

When you google ‘Damon Salvatore pictures”, you will see he has the perfect face and the perfect body. But it isn’t only his looks that make us fall in love with him. His complete personality can make any girl go weak in the knees. A mere stare from those penetrating eyes is enough. When he opens his mouth to deliver his super-witty one-liners, he shoots up the oomph levels. 2. Damon Salvatore has an unparalleled sense of humor.

“Dear Diary, a chipmunk asked me my name today. I told him it was Joe. That lie will haunt me forever.”

He has delivered so many outstanding dialogues in TVD that it is possible to lose count. No matter how tense the situation is, he almost always has a witty one-liner up his sleeve, no matter how big the fix is. 3. He puts up a complex front.

“I just have to say it once. You just need to hear it. I love you, Elena. And it is because I love you that I can’t be selfish with you, why you can’t know this. I don’t deserve you. But my brother does.”

And after he says these words, he makes sure that she forgets it. So that his confession wouldn’t be a cause of misery to her and Stefan Salvatore hot brother of his. This is a very selfless thing to do and not something that we would expect from a regular killer. This dialogue testifies that he has much more depth on the inside. A stark contrast from what one would perceive from how he usually behaves. 4. He is fiercely honest and practical.

“Don’t get me wrong, Stefan. I don’t mind being the bad guy. I’ll make all the life and death decisions, while you’re busy worrying about collateral damage. I’ll even let her hate me for it. But at the end of the day, I’ll be the one to keep her alive.” To brother Stefan.

The bond between Damon and Stefan is incomparable to anyone else. In short, he loves Stefan. He is willing to go out and actually get things done, and in a particular amount of time. With his dark past and the torture he has faced in his life, Damon realizes he is the bad guy. And, Damon refuses to show the kindness that lives inside him. But he loves everyone. Need I say more? 5. Even when he doesn’t show it, he really cares.

“When people are good they expect good and I don’t want to live up to anyone’s expectations.”

So he doesn’t show the ocean of love concealed in his gorgeous eyes very often, but he does care for everyone. This includes Stefan, and of course, Elena (played by Nina Dobrev). In short, all his family members. Remember the scene where Damon and Stephan lie about the daylight ring? That’s some cool bro code right there. When he reveals that, we can’t help falling in love with him. How many of you have seen him shirtless? We are sure you fell in love with him then.

6. Not just a badass, he is courageous.

“You have ten seconds before I go old fashioned on the new guy.”

This dialogue oozes with his badass attitude. Also, how can we forget how many times Damon killed Alaric and Jeremy on the show? The only thing that kept them alive was the Gilbert ring. He is also one of the most tortured characters on TVD. Even while he is being tortured, it neither diminishes his courage nor his one-liners. 7. He is a quintessential romantic on the inside.

“You want a love that consumes you. You want passion. And adventure. And even a little danger.”

Damon calls for Elena Gilbert to give her all that. She is the only person for whom he would fight against the world, even though Rebekah killed Elena in the end. Don’t we all want a lover like that? Hence, Elena finds Damon was an iconic duo. Our hearts broke every time he went through intense emotional pain because of the woman he loved. We get you*wipes his tears* He played an important role in all episodes in the prison world, with him and Bonnie stuck together. He played an excellent brother to Stefan and was the best lover to Elena. Along with this, he is also a very good friend which tells a lot about his personality. All the viewers admired the friendship between Damon and Bonnie.
This is why girls fancy him, and guys are so very jealous of him. Why shouldn’t they be, after all? Those enticing eyes, that signature smile, the list of irresistible traits doesn’t end. Mr. Somerhalder, thank you so much for giving us girls, particularly the single ones, a reason to live. *swoons*
That was our piece on the best character from Vampire Diaries. Check out similar articles here!