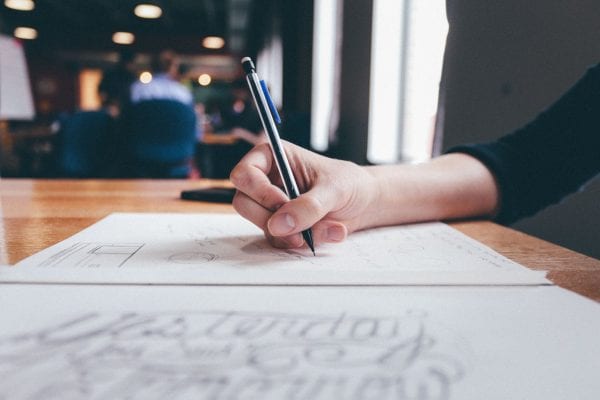 We, as a species, tend to give away who we are easily. And for the most part, we don’t even realize it. We are expressive in everything we do- what we wear, how we talk, how we laugh, what we like to watch or read, what opinions we keep and especially, the way we write.

Think about it. All schools and education systems establish the same baseline for every student, no matter which part of the world they are from. We all learn our a,b, c’s and 1,2,3’s in the same way. But even after being given the same handouts and resources, we leave with a different takeaway. It’s because even if we are put in the same environment, we are individuals with different thoughts, voices, and opinions.

Since your handwriting is unique to yourself, it is believed that handwriting shows your personality. It was Confucius, a Chinese philosopher, who gave birth to the thought of handwriting analysis when he said, “Beware of the man whose writing sways like a reed in the wind.” Oldest published documents that mention handwriting analysis date back to the 1600s. Since then, many reputed researchers and scholars have weighed in on this doctrine, and that’s how Graphology was born.

Graphology is the detailed study and analysis of handwriting, which delves deep into micro-elements of an individual’s handwriting that resonates with her personality. It has been used in forensics, medical research, employment processes, therapy and can even be upheld as evidence in some courts of law. Graphology is deemed to be so accurate in revealing an individual’s personality, that it is not permitted to be conducted without consent in some countries. To this day, Graphology is condemned by some researchers, while regarded with high esteem by others.

The first publication of Graphology came up in 1622. Written by Italian philosopher Camillo Baldi, it talked about how letters and strokes can be a way to judge a man or woman. While this publication is now credited with starting the revolution of art that is exceptionally significant today, most of its content and theories have been disproven, and do not connect to modern Graphology. Nevertheless, this publication led to schools of thought which researched more on whether handwriting shows your personality.

Since then, the art of handwriting analysis has been in play for a long time. It’s quite literally- reading between the lines. Handwriting analysis includes paying attention to micro-elements, not only the slants, size of letters, margin, ink imprint, baseline but also the loops of l’s and p’s, and the dots of i’s and j’s. The complex process can take time, and can only be conducted by experts who specialize in the skill.

According to a study conducted by The American Psychological Association, the use of technology can prove to be effective in speeding up the process. Forensic Handwriting Analysis does include the use of video cameras and computer equipment, especially in high profile cases where handwriting on documents can serve as substantial evidence. However, this advanced technology can be used only in well-equipped labs, which are expensive and, thus, not so common. The paper also points out that a tool that does not require human intervention to detect characteristics based on handwriting should be developed as it will be quicker and cheaper in the long run.

Why is it Believed that Handwriting Shows your Personality?

According to a research paper Behaviour Prediction Through Handwriting Analysis, handwriting shows a person’s preferred rhythm, movement, and style. The way an individual writes is a culmination of various factors- stress, work-life, body structure, mental and physical health, emotions, and tendencies. The paper states that handwriting is a form of conversion of graphic structures in the brain to cursive writing on a paper. Since the handwriting of every individual is not subject to their sex, religion, race, or caste, it can be analyzed without discrimination. Handwriting shows your personality without taking into consideration your ethnicity or color.

Write down: a quick brown fox jumps over the lazy dog, in cursive on a piece of paper. And then analyze the following to understand how your handwriting shows your personality:

These are a few examples of the way handwriting shows your personality. Now sign your name on the same piece of paper, and do it in the same way you tend to sign on documents. Now analyze it in the following way:

Other Uses of Graphology

Graphologists have also analyzed the handwriting of famous people and notable stars. And the accuracy does support the theory that handwriting shows your personality.

For instance, Bill Gates’ signature is comprehensible, and also original looking because it has a distinctive style. The first letters are large and stand out, revealing his confidence in who he is. Since the signature is easy to understand, it also implies that he is simple and down to earth, despite all his success.

Graphology is also used to understand health conditions, albeit not as an accurate diagnosis. The reason graphology links to health and medicine is because deteriorating mental and physical health has a direct effect on our excellent motor skills. For instance, a person who has Parkinson’s disease will have small and scrambling handwriting, which would be very difficult to understand.

While Graphology seems simple and easy to comprehend at the surface level, which is far from reality. ANN (Artificial Neural Network) has developed ways of evaluation using the five main parameters, namely- baselines, slant, pen pressure, letter ‘i,’ and letter ‘f.’ The paper Behaviour Prediction Through Handwriting Analysis explains these methods, which are the polygonization method, grey-hold threshold value, and template matching. These help in understanding the behavior and personality traits of the writer. The paper focuses on how handwriting shows your personality, by judging it based on these five parameters, which are input to the ANN.

Is it True that Handwriting Shows Your Personality? Or is it a Hoax?

Many researchers question the very essence and base of Graphology- Is Graphology even real? Isn’t the logic based on assumptions and generalization? Can an individual’s personality traits have a direct association with the slant of their letters?

Graphology has been subject to criticism and scrutiny ever since it came about. Since it’s validity has not been proven and does not have substantial scientific backing, many don’t believe it. The Assessment of Graphology by The Central Intelligence Agency links the belief of Graphology to the Barnum Effect, which is the phenomenon that happens when people read a description that is supposed to relate specifically to their personality and believe it to be accurate.

But that information is usually generic and could apply to many people. Graphology and its related theories aren’t specific in the process of handwriting analysis and in the telling of how it is certain that handwriting shows your personality.

This does seem possible. Think about it- when you compared the strokes and lines of your letters to the above handwriting analysis test, was it applicable to you? Or did you lead yourself to believe that it’s true, thinking that it is be tailored to your personality traits? Terms like creative and impulsive are subjective, which is a major flaw in handwriting analysis.

Our handwriting also depends on our mood. External influences like weather, will, writing instrument, tiredness, interest, hurry, and temper are not factored in handwriting analysis. If someone looks at my handwriting when I just start, it looks neat and even, but with time and as my hand gets tired, my handwriting loses its original characteristics and starts to look squiggly. If a graphology expert were to look at my handwriting in the beginning and end, they would think it was two separate people and come up with two entirely different sets of personality traits!

There is further proof claiming that the fact that handwriting shows your personality is fake. A test run was done for this, in which several graphologists analyzed the same handwriting, and all came up with different conclusions about the writer’s personality. That means Graphology can’t be deemed universal, defying a significant feature of science.

It is also effortless to forge our handwriting and make it look like someone else’s. Graphologists claim that even if we forge another individual’s handwriting, personal attributes of our handwriting will remain. But there is no proof supporting this, especially since handwriting forgery has been known to jeopardize many cases and legal trials beyond damage. To that end, many believe that graphologists are no worse than psychics or fortune-tellers.

A research paper by Ph.D. Barry L. Beyerstein, calls Graphology a pseudoscience. According to him, a significant tell-tale sign of this is that Graphology has not had discoveries for a very long time, despite being in existence for so long. He also debunks the logic behind hiring graphologists for the selection process of prospective employees in corporations, claiming that they are employed by employers only to serve as reassurance so that they have someone to blame when they hire the wrong employee. He also says that the expertise of graphologists is only utilized at a much later stage of the selection process after a pool of prospective employees has already been created. In that, graphologists have good chances of selecting an individual who would later be a good employee. And there is no way of knowing that the employees deemed unfit by graphologists based on their handwriting was any good or not. To learn more about this, click here.

There is an abundance of proof against and for Graphology, which makes it impossible to judge if handwriting shows your personality or not. However, it is true that Graphology can’t be called an actual science until there is further scientific backing for it. But one thing is sure- a person’s handwriting is her own and therefore must have some affiliation to her personality, making Graphology a field that requires more in-depth research.

For now, the paper by Central Intelligence Agency claims that Graphology can be called an art and not a science. Whether handwriting indeed shows your personality- it’s now for you to decide.