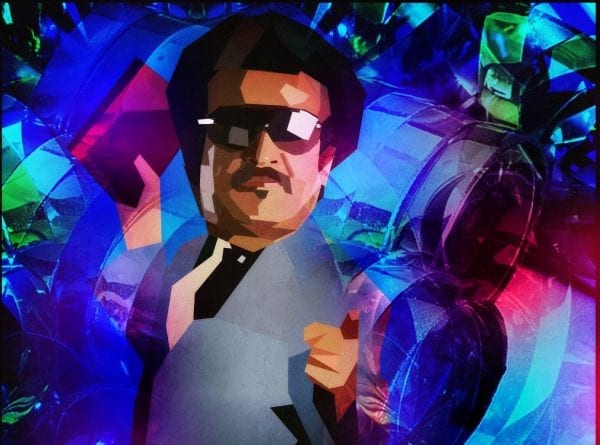 From being a bus conductor to bragging numerous awards for his phenomenal performances  in the cinema to having numerous jokes to being termed as ‘Demi-God ‘ this man has achieved a lot in a lifetime. He has a Brobdingnagian fan following. This man has been awarded with most prestigious “The Padma Bhusan Award.”

This man is no other than Mr. Rajinikanth. This film won a national Film Award, three Flimfares and two Vijay awards. The story revolves around a software architect who lands in India after completing his work from The States. On returning, he dreams of setting up a non-profit educational and medical institution to provide free aid to the needy. But here comes the twist folks. The villain,an influential businessman challenges this young lad’s dreams as he is minting money by providing education and medical treatments. So, our tough guy fights for his dreams against the villian and corruption.

This film made Rajinikanth win the best villain award for his negative role. This movie was dubbed in Hindi and was known as Robot. The story of the movie revolves around a scientist who creates a Robot named “Chitti” for the Artificial Intelligence Research and Development Institute. During the evaluation process, Chitti fails the test. The story further unfolds Chitti’s recreation and misusing his creation by turning into a cold blooded killer, who aims to destruct the world and rule it. This story also brings in emotion like love. Because of the special effects and action it was a likeable movie for the buds. The story of the movie swirls around a young lad named Surya. He turns out to be a hero for the slum dwellers in his locality. He is a kind of a lad who ends up into fracas with the wrong doers. From being an abandoned child to an angle in disguise his role portrays multiple variations of emotions. Another emotions of veracious friendship is quite advert in the movie. This story is a movie of love and revenge. Years ago, a graceful dancer, Chandramukhi was burnt into ashes by Vettaiyan because she did not reciprocate his love and loved another dancer, Gunashekaran. Though the body was burnt, her soul did not receive salvation and quest for revenge continued. This movie revolves around her struggle for revenge and went on to be remade in Hindi as ”Bhool Bhulaiya”.

During the early days of Rajinikanth’s career, he was seen playing negative roles. Moondru Mudichu was one such movie starring Rajinikanth as Prasath, Kamal Hassan as Balaji and Sridevi as Selvi. Prasath and Kamla happen to be roommates and fall for the same girl. Prasath pretends to support Balaji for his love towards Selvi but somewhere within he tries to separate them. Balaji’s death and Selvi’s sister’s face burning incidents make Prasath sympathetic towards Selvi. To seek revenge from Prasath, Selvi marries Prasath’s father and owns the status of his mother. The movie leaves the audience with a lesson to have a conscience.

Bairavi was the first movie where Rajinikanth was offered a lead role and his career took off right after this release. This movie again revolves around revenge of a brother for his long lost sister. The plot is all about Mookaiyah’s (Rajinikanth) unawareness, leading him to abduct his long lost sister followed by she being raped by his landlord to her death instigating him to seek revenge from the landlord. The movie portrays the life story of the members of a band. Rajinikanth plays the role of a guitarist and Kamal Hassan is shown as the lead vocalist who falls in love with a girl dying from a severe ailment. The movie ends with sad demise of the leading lady. This is a modernistic movie portraying youth, love and friendship. This movie did not perform great at the box office but remains to be Rajinikanth’s personal favourite. The movie portrays him in a saintly role which was not much appreciated by the audience.

The movie did not appeal much to the audience and did not hit the box office as well, but was the superstar’s English debut. The story was a blend of adventure, thrill and mystery. This film completed around 175 day run at the box office and later went to get a release in Japan and received wonderful response from Rajinikanth’s Japanese fans. The story of the movie revolves around treachery committed by the near ones over property, regret and realization.

In this movie, Rajinikanth plays the role of a carefree young adult in his early 20s. This is a movie with jokes that would surely cause your stomach to ache and your room to fill with laughter. Apart from the jokes the astonishing thing to observe was to see Mr. Rajinikanth without a moustache. Kabali is one of the recent hits adored my millions of Rajinikanth’s fans. The story again revolves around Anna’s fight against the atrocities faced by the Tamilian migrants in Malaysia. Here Rajinikanth takes a stand for the community and fights for their betterment. The movie portrays how a feminist and industrialist woman marries a kind hearted man who happens to be the company’s workers head. Due to clashes in the opinion and his rebellious nature, the businesswoman marries him hoping to have a control over his decision. But her plan backfires her and the union head wins this fight. On realizing her mistake she steps down from the chairmanship of the company and turns into a homemaker. This tale of revenge and justice was the Bollywood debut for Mr. Rajinikanth. The movie revolved around the fight towards injustice by two brothers, where one takes the law in hand and the other follows the legal system for seeking the revenge.