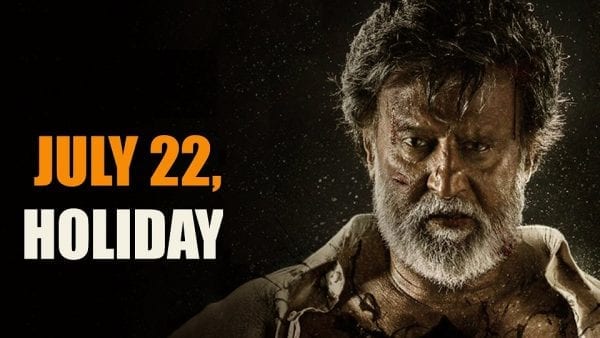 Rajinikanth’s star status is known world over. He has a huge fan following and is worshipped in the south. Rajinikanth is treated like a god by many fans and is even said to have temples dedicated to him! Therefore, when news came out that his movie, Kabali was slated for a July 22nd release, people started applying for leave applications immediately. Not only that but companies declared holidays for the show and booked tickets for the employees. Opus, a structural solutions start-up in the city is one such example. The start-up declared a holiday on July 22. As the firm’s official notice goes, the holiday is declared to “avoid sick leaves, mobile switch-offs and mass bunks”.

Manoj Pushparaj, head of operations for the firm, says that this was done to motivate employees. The start-up is also arranging tickets for all 48 staff in a partnership with PVR cinemas. “The employees come from different parts of India, and 18 of them are from Tamil Nadu,” he says.

However, Opus is not the only start-up to declare a holiday for the film. Fyndus, a data management start-up from Chennai, has also declared a holiday in an attempt to deal with Kabali frenzy.

When contacted, the company confirmed that a holiday was declared by vice-president, India Operations, Vinoth Sudaroli. “We didn’t want to get a pile of leave applications from our employees and hence we have declared a holiday on Friday,” informed the spokesperson. Not only a holiday but in addition to this one benefit, the company is also providing free tickets for the entire team so that they can enjoy the movie in theatres on its release!

Many employees, unfortunately, do not work in companies where they are being granted a holiday. However, this does not stop them from going for the first day-first show and many have applied for a holiday for the July 22nd. The ones working in nationalised banks do not get a leave and plan on “falling ill” on the day. Watching the first show on the day of the release is something that these fans refuse to miss. The superstar’s charm and popularity is such that a group of people started an online petition requesting the Tamil Nadu chief minister to declare an official holiday on the date of movie’s release saying, “We humbly request our CM Jayalalithaa to declare Friday as a public holiday, which will enable people to watch the movie in comfort, without the hassle of taking leave.”