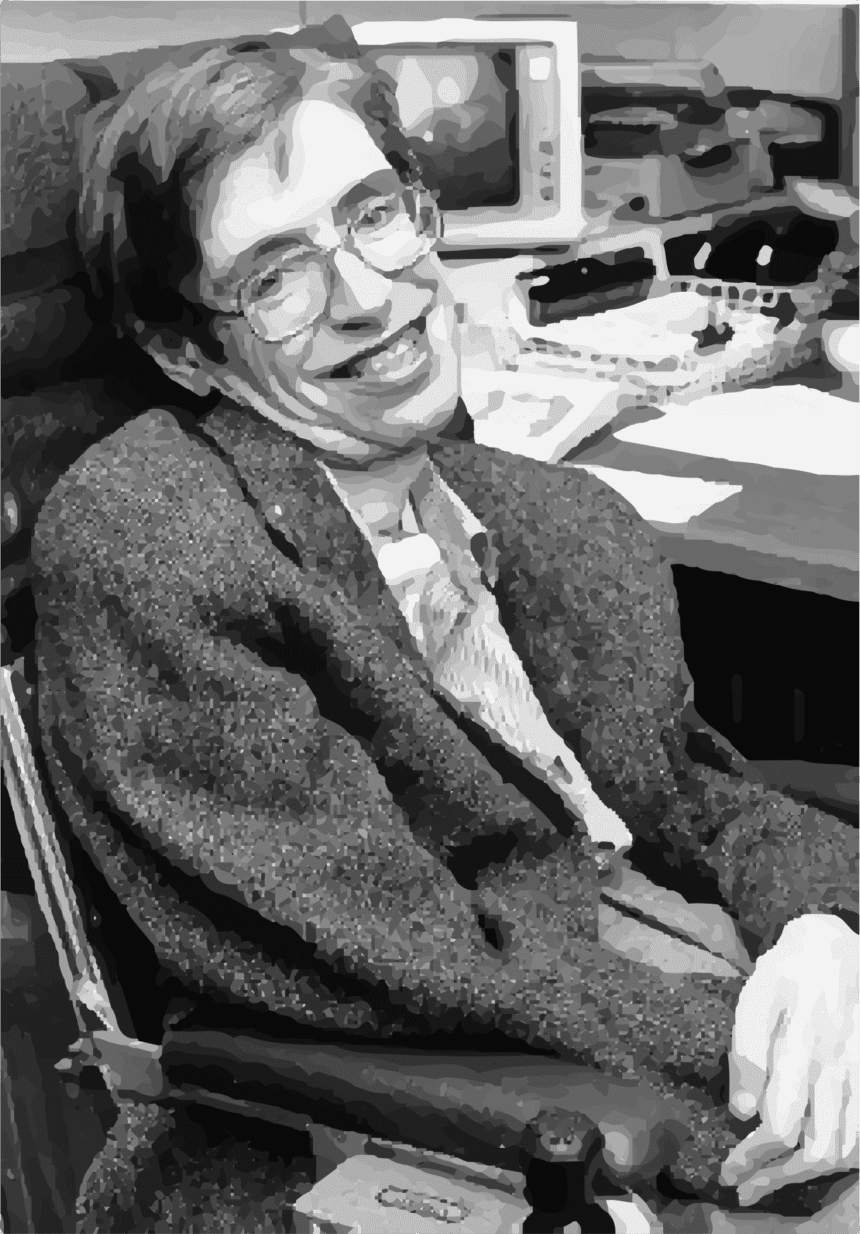 1. How Did Stephen Hawking Talk? : An Amazing Story

Born into a family of thinkers, Stephen William Hawking was the first son of Mr. Frank Hawking and Mrs. Isobel Walker. Stephen Hawking was born in England’s Oxford on January 8, 1942, on the 300th death anniversary of astronomer Galileo Galilei. His father was a medical researcher, and his mother was a school teacher who was a great inspiration to young Hawking.

Like any other kid, Stephen was a healthy and energetic kid who was very interested in learning science. This motivated his father to take medical science courses, but the young boy showed a passion for becoming a scientist.

At the age of 17, he graduated from Oxford University in theoretical physics with a first division. He then went on to study at the University of Cambridge to pursue cosmology in the 1960s.

He noticed that he was growing more clumsy during his final year at Oxford. His health kept deteriorating after relocating to Cambridge. In 1962, over the holiday break, he tripped while ice skating in St. Albans and was unable to get back up.

When Stephen went back to his home, his father noticed a difference in his actions. Frank insisted he undergo a checkup at the hospital. After his diagnosis, he was informed that he was suffering from an unspecified incurable disease, which was later identified as either motor neurosis or Amlotrophic Lateral Sclerosis (ALS), a fatal disease that affects motor neurone disease.

They parted ways in 1990 and got divorced in 1995. The same year, he married Elaine Mason, a former nurse whose ex-husband had created Stephen’s speech synthesizer. They divorced in 2007, marking the end of their relationship. Along with his children and Jane, he was still assisted by a dedicated team of personal assistants.

On March 14th, 2018, at the age of 76, one of the most influential physicists of the twentieth century and perhaps the most celebrated icon of contemporary science, died giving a lecture.

2.How Did Stephen Hawking Talk: What Is Motor Neurosis, Or Amyotrophic Lateral Sclerosis (ALS)?

Amyotrophic lateral sclerosis (ALS), or Lou Gehrig’s disease, or motor neurosis , named after the basketball player, is a fatal disease that begins with a muscle twitching, resulting in gradual loss in hands, feet, or limbs that spreads along the body, which affects swallowing, talking, and eventually breathing. How did Stephen Hawking manage to speak despite being affected by als?

In people affected by Als, the motor neurons are damaged and the muscles do not function with Amyotrophic Lateral Sclerosis, which was diagnosed when he was 21. The doctor predicted that he had only two years to live.

A common question arises: how did Stephen Hawking live for 55 years after a diagnosis of ALS? Leo MC Cluskey claims that the ability of motor neurons to control the diaphragm, or respiratory failure, and malnutrition is brought on by the deterioration of swallowing muscles and talking. People who are affected when they are young typically live longer.

3.How Did Stephen Hawking Talk?: What Is a Speech-Generating Device

To answer your question, “How did Stephen Hawking talk?” it is necessary to first define a speech generator. Computer-based systems called speech-generating devices are a system for those who are unable to speak. The Assistive Context-Aware Toolkit, or ACAT, is a speech synthesiser software developed by Intel that allows Hawking to use It was released under a free software license, Wired reported in 2015 . The software is open source and can be used by anyone with a talking disability. These can be accessed using different-sized keypads, optical pointers, or single-switch scanning techniques.

They are typically mounted on a swing-away arm that attaches to the wheelchair frame in order to keep the device within reach. It is important that the user can easily access the control input method, which may necessitate the use of additional wheelchair mounting hardware. The type of wheelchair and seating system determine where to place the speech-generating device.

4. How Did Stephen Hawking Talk?

It’s no surprise that everyone wonders how Stephen Hawking a wheelchair ridden man got around to giving lectures and writing books.

He caught pneumonia while travelling to CERN in Geneva. In the hospital, a ventilator was put on him. His health was in serious danger. When it came time to turn off the life support, the doctors consulted Hawking’s then-wife, Jane who bluntly declined.

The infection was managed by medical professionals, and he eventually started breathing. They also performed a tracheotomy, as a result he permanently lost his ability to talk and to communicate.

Initially, Professor Hawking pointed to letters on a spelling card and asked them to form words by raising his eyebrows. A physician named Martin King started working with Hawking’s computer, a new communication system.

The interface is a programme called EZ Keys, developed by Words Plus, which provides a software keyboard that’s displayed on a tablet computer and mounted on one arm of his wheelchair.

The nerve that gave him the ability to move his thumbs kept deteriorating. His hand became physically weak to operate the clicker. Later, his graduate assistant came up with a muscle twitching mechanism to feed information into his computer through a cheek muscle known as the “cheek switch.”

Hawking used an infrared switch mounted on his spectacles, which can be moved by twitches in his cheek. The Voice Plus CallText 5010 speech synthesiser analysed his messages after he sent them.

Since then, Hawking has been able to communicate. The the new synthesizer uses cheek muscles to speak, write books, browse the internet, and send emails. Yet his communication skills continued to deteriorate. By 2011, he could only speak one or two words per minute.

Dr. Hawking contacted Moore through an individual letter, saying that his communication process was generally losing and was there any way that intel could help him? Moore asked Justin Rattner, who was Intel’s CTO at the time, to investigate the issue.

Rattner put together a dedicated team of specialists from Intel Labs to help him cope with his communication process. He brought them to Cambridge for a conference celebrating Hawking’s 70th birthday. Rattner told the audience that he hopes this team makes a significant advancement and finds a method that allows hawking to communicate at the same level he did a few years ago.

A wheelchair-ridden man used a speech-generating device (SGD) or a voice output communication aid to talk through “the computer.” This special device either supplements or replaces speech for people who have problems communicating with traditional software.

Since 1997, Hawking has been using the new synthesiser by Intel Corporation in his computer-based communication system. After years of experimenting with novel methods, the corporation sent a team to Hawking, where they developed ACAT(Assistive Contextually Aware Toolkit), a smartphone keyboard solution, in collaboration with SwiftKey. .

The new software’s typing programme relied on a machine learning algorithm that had been trained on Hawking’s work; Swiftkey and Intel showed the algorithm the physicist’s past lectures and books to aid it in predicting the words he would type.

The software went on to predict and auto-fill the words he often used, thereby giving him a further simplified process.

For instance, when he typed “the,” the word “black” and then “hole” appeared. The entire computer software was updated frequently every two years to cope with the gradual loss of control over his muscles.

5. How Did Stephen Hawking Talk? : The Man Behind Hawking’s Voice

How did Stephen Hawking talk Sven Brandsma’s photo on Unsplashcopyright 2019.

The world famous physicist and scholar known for his synthetic voice as robotic-sounding got this male voice from Dennis Klatt’s voice, popularly known as “Perfect Paul.” Dennise H. Klatt who was a researcher at the Massachusetts Institute of Technology (MIT).

Since 1960, Klatt has been working on speech synthesis and developed an algorithm called KlattTalk or MITalk. The system had three voices: a Perfect Paul, with an American accent, The Beautiful Betty, and Kit the Kid, recorded by Paul’s wife and daughter, respectively.

Klatt suffered from thyroid cancer, which resulted in losing his own voice. He continued recording with his voice untill he lost the ability to speak altogether. Professor Hawking used Klatt’s voice, as now he recognised himself with that voice. He declined all the updates and new versions of the Hawking computer. The voice became the most recognised voice in the world.

6. How Did Stephen Hawking Talk: Hawking’s Contributions to Theoretical Physics

Initially, singularities were mentioned in Einstein’s theory of general relativity, that space is infinitely curved. Back then, it was not clear if we could rely on it or not. Hawking worked on this theory. It is applied to the whole universe and says that gravitation produces singularities.

The Hawking area theorem’s first law states that a black hole’s total surface area will never get smaller. The 2nd law, the “no hair” theorem of black holes, can be categorised into 3 numbers: mass, angular momentum, and charge.

Black holes emit radiation till their exhaust evaporates. It is also known as the Hawking radiation theory. In January 1971, the gravity research foundation awarded him the “black hole.”

Allen Guth introduced this theory in 1980. In physical cosmology, cosmic inflation is a theory in which the universe expands after the Big Bang. Hawkins’s Quantum Flux demonstrates that galaxies may spread throughout the universe during inflation.

Because time did not exist before the Big Bang explosion, the concept of the universe’s beginning is meaningless; the universe had no initial boundaries in time or space.

6.4 A Brief History of Time

The book, written in simple layman’s language, was a best seller that broke the record of 237 weeks and appeared on the British Sunday Times best seller list. It explains a range of subjects in cosmology, such as the Big Bang, black holes, light cones, etc.

No words are enough to compliment the great scientist. His contribution to science and humanity will always be remembered and will motivate aspiring scientists.