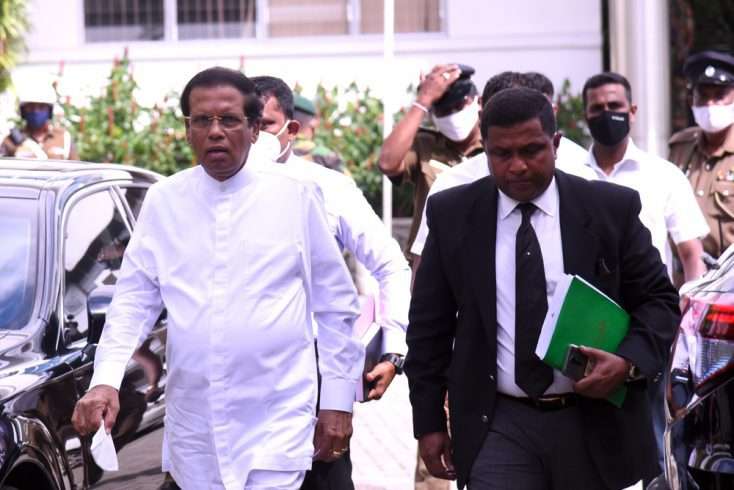 There is only one way to do that. Actually, there are two. But the other one is taken care of by our government or their government, but the first one is solely in our hands! And, I’m just about to reveal that! Ladies and gentlemen, the most bad-ass trick of the year, the trick that fills our island country’s president with disgust, its government with regret, and it’s female population with lust is, wait for it, women throwing their bras at Enrique Iglesias.

Yes. Exactly. This guy. THIS GUY! So girls, if you don’t throw your bras at him when you’re at his concert, you ain’t doing it right! Mark my words.

Now, let’s move on to the picture of the Sri Lankan President who was, to put it in the nicest of words, pissed at what happened. He said, quote, that the promoters of the show need to be beaten with poisonous stingray tails. This is his good picture.

By the way, he ranted in this manner, “This is most uncivilized behavior that goes against our culture. I don’t advocate that these uncivilized women who removed their brassieres should be beaten with poisonous stingray tails, but those who organized such an event should be”. Now, Mr. Maithripala Sirisena needs to take a serious chill pill. A woman threw her bra at a hot guy like Enrique Iglesias. The guy whose voice alone is so seductive that a girl can’t even voice her fantasies about him out in public, and you are disgusted by that!

Well, I smell clear jealousy. Mr. President, you’re so jealous that your smile looks like you have 100 teeth, which is a clear sign of jealousy (or just another election campaign, but come on!).

Ultra serious rants of this new found President of an age-old land apart, let’s watch that video when Enrique caught his first bra from the crowd. He’s such a pro!

But there’s something extremely serious that we need to discuss along with this. What the Sri Lankan President has said is wrong in every sense. I’m not taking my words back for that. But, what all those women did was wrong as well.

If any of you readers is going to defend every woman out there who threw her bra at him by saying that it was just their way of complimenting him; then you should also defend every man who throws a condom at every female singer’s concert too.

It works both ways, always. Actually, it doesn’t, but it should. We’re all human beings no matter how hot and sexy we are. How much someone else’s voice makes you want to do things to them, which you’re not allowed to speak of in a country where babies are born by touching of flowers. It just doesn’t matter.

Guide to the Best Margarita Recipe.\]\ 10 Excellent Recipes You Can Try at Home