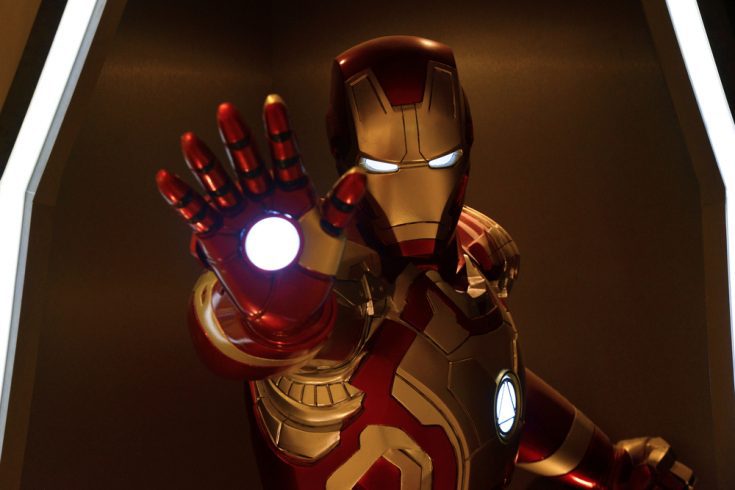 From comics to the movies, Iron Man has found a place in the hearts of fans. It was a masterpiece enhanced by Robert Downey Jr.’s amazing portrayal of the character.

It was the first movie by Marvel Studios, the entry point into the whole Marvel Universe. Complete with amazing fight scenes, detailed CGI, and a soundtrack to electrify them all, Iron Man still is one of a kind movie.

Starting from the first movie made with the intention of crossing at least $100 million, Iron Man 1, to the latest Avengers Eng Game grossing billions worldwide, both Iron Man and Marvel has come a long way with its Iron Man films. All throughout, the flying man in the iron suit has become an inseparable part of it all.

It’s no secret that Iron Man is synonymous with Robert Downey Jr. and it’s for a simple reason. Back when the Marvel Cinematic Universe was withering away, Iron Man started it all again for them.

A decade or so down the line, we have the Avengers Endgame, the biggest and perhaps most successful movie ever made.

But what made the directors and Marvel choose Robert Downey Jr. in the first place? We will talk about it all in the Iron Man facts below! We are sure you’re going to love it, as much as we did making this list.

2. Iron Man- Facts to Know About

So here are some facts you must know about Iron Man.

1. The movie makers wanted the movie to be good, with suggested box office run of just $100 million, but was a surprise box office hit, ended up earning nearly $100 million in the first weekend and grossed $585 million later worldwide.

2. Stan Lee says he had created Iron Man by challenging himself to make the readers like someone whom they normally wouldn’t accept. The concept of arms-creator-Stark turned out to be a hit even when the readers of the 1960s were anti-military and anti-war.

3. Iron Man was the first self-financed movie for Marvel Studios.

4. Robert Downey Jr. had spent almost five days a week for weight training and also practiced martial arts to order to get in shape.

5. Tales of Suspense was the debut issue of Iron Man. The first standalone issue was released in 1968.

6. The Mandarin was the originally intended villain, who was a scientist and a megalomaniac who had power from 10 rings of alien technology.

7. The movie was shot in California as Jon Favreau felt that there were too many superhero movies which were set on the East Coast, mainly New York.

8. Marvel movie studio was initially set up, aiming child audience, to sell toys and merchandise on its characters.9

9. The toy companies were initially hesitant to release the merchandise as Marvel hadn’t made any successful movies and they weren’t convinced on the success of the flying-man-in-an-armored-suit concept. They even tried to pair the SpiderMan toy deals with Iron Man but wasn’t accepted.

10. The Iron Man in the comics during the Marvel Civil war story period was hated by many as he had to hunt down other favorite superheroes of the people.

11. Paul Bettany didn’t know which movie he was working on, hadn’t seen IronMan before and was not familiar with the plot. He had done it as a favor for Jon Favreau.

According to him, the job was so easy that it almost felt like a robbery as he had worked just for two hours and got paid a hefty sum too.

12. Once Stan Lee reportedly had seen an Iron Man drawing and asked why there wasn’t any nose. Instead of saying that it was a helmet, the illustrator drew the nose, which stayed until Lee realized how weird it was.

13. In Iron Man, there were five sets of armor, whose inspiration came from the Iron Man comics. Stark’s first suit, a simple one made of iron, ‘the Mark I’; a silver iron man’s suit Stark developed as a prototype, ‘The Mark II’; the final red-gold one ‘The Mark III‘; the all gold armor JARVIS present – considered a tribute to “Golden Avenger” armor worn by Iron Man in his early career; a silver-red armor presented by JARVIS, similar to the “Silver Centurion” armor he wore in the 80s.

16. Obadiah Stane’s “Stane International” was a business rival to Tony Stark in the comics than being a part of Stark Enterprises.

17. Tony Stark entered MIT when he was just 15 and graduated in 2 years, holding a master’s degree in chemical engineering.

18. According to the comics, the suit was originally built in Vietnam, then later changed to being built in the Gulf War and finally settled for Afghanistan.

19. In the comics, there is a universe where Tony is a woman named Natasha Stark and is known as Iron Woman and later marries Captain America.

20. Jon Favreau went on a diet and lost 70 pounds in celebration for getting the job as Iron Man’s director.

22. When Jeff Bridges heard that Obadiah was a name from the Bible, he researched on the Book of Obadiah where he was surprised to know that its theme was retribution which Obadiah Stane represents in the movie.

23. Isaac Perlmutter, who had earlier refused to be under the public eye, showed up with fake mustache and even glasses during the premiere of Iron Man in the TCL Chinese Theatre, since it was looking like a potential hit.

24. The scene where Pepper discovers Stark removing the armor which was damaged, there is Captain America shield on the workbench, which was edited out in the trailers.

26. Mark Scarlotti is the real name of Whiplash in the comics, later renamed Leeann Foreman. Ivan Vanko is the movie name, which was the last name of the first Crimson Dynamo. The name Anton Vanko, Ivan Vanko’s father, is the first name.

27. In the comics, Tony was revealed to be an alcoholic and had addiction in the Demon In A Bottle story, which was the concept taken in Iron Man 2 where he fights Rhodey after getting drunk in his birthday party.

28.There is a building with the Roxxon logo in the highway battle with Iron Monger. Roxxon, in the Marvel Universe, is an infamous conglomerate for illegal activities whose agents were responsible for Stark’s parent’s death.

29. Originally Agent Phil Coulson which was played by Clark Gregg had a smaller part. It was just ‘Agent’ initially but due to the great chemistry of Clark Gregg with other actors, they had to add more scenes for him.

Watch Iron Man 2 Behind The Scenes

30. Iron Man 3 is the first iron man movie in the Iron Man franchise which wasn’t directed by Jon Favreau. The offer was turned down by him in order to direct the Magic Kingdom.

31. Iron Man’s creator Stan Lee had based Tony on Howard Hughes. In his words, he was “one of the most colorful men of our time: an inventor, an adventurer, a multimillionaire, a ladies man and finally a nutcase.” Robert Downey Jr. said that portraying Stark was “a challenge of making a wealthy, establishmentarian, weapons-manufacturing, hard-drinking, womanizing prick into a character who is likable and a hero.”

32. Editor Kyle Cooper created the montage of the life story of Tony Stark which included the real-life photos of Robert Downey Jr. when he was young and his father Robert Downey Sr.

33. There are about 450 individual pieces which make up the iron man suit.

34. Since the script was not completed when the filming started as they were more concentrated on the action and storyline, the dialogues were mostly ad-libbed throughout the shooting. Jon Favreau said it made the movie natural.
There were scenes shot with two cameras with Robert Downey Jr. improvising on spot, requesting multiple takes, wanting to try new things in each take. Gwyneth Paltrow had a difficult time, trying to match with him as she didn’t know what he was going to say.

Watch Iron Man 3 Behind the Scenes

35. The ringtone Rhodey has when Tony Stark calls is actually a version of 1966 Iron Man cartoon theme song.

36. The computer system JARVIS, which stood for Just A rather very intelligent system, was a tribute to Howard Stark’s butler, Edwin Jarvis. It was in order to avoid comparisons with Batman’s butler Alfred Pennyworth that he was changed into artificial intelligence.

37. In Iron Man #17 (comics), it says that Howard and Maria Stark had a son before Tony, named Arno who is hiding since his parent’s death and that Tony was adopted.

38. Iron Man had once given his title to 15 years old genius Riri Williams, who, just like Tony Stark had graduated from MIT, built her own suit in her room and was called Ironwoman.

40. Robert Downey Jr. was Jon Favreau’s choice as he thought that Robert had a fitting past for the character.

“The best and worst moments of Robert’s life have been in the public eye. He had to find an inner balance to overcome obstacles that went far beyond his career. That’s Tony Stark. Robert brings a depth that goes beyond a comic book character having trouble in high school, or can’t get the girl.”

He felt that Downey would be able to make Stark “a likable asshole” but would still express an emotional journey after he won the audience over.

41. Among the superheroes who are billionaires, though Stark enterprises have annual revenue of $20 billion, Wayne Enterprises beats it with a sum of $31 billion. In the Forbes list of wealthiest fictional characters in 2013, Tony Stark’s stands fourth with a worth of about $12.4 billion.

42. The suitcase armor is referred to as “the football’, which was a reference to the briefcase which accompanies U.S. President with nuclear launch codes.

43. Scarlett Johansson had dyed her hair in red for the Black Widow role, even before she was selected for it. She trained for about 6 week before the movie started and six months again later.

44. To prevent Norman Osborn, the new director of S.H.I.E.L.D., from gaining access to the information in his mind about the other superheroes’ identities, Stark had once rebooted his mind, which even left major brain damage.

45. Avengers have had many versions over the years

46. Tom Cruise, Nicolas Cage, Colin Farrell, Patrick Dempsey were some of the actors which were once considered for the role but Jon Favreau and producer Kevin Feige wanted Robert Downey Jr. But Favreau had Sam Rockwell as a backup plan, who later played the role of Justin Hammer, the billionaire industrialist and the nemesis of Iron Man.

47. Robert Downey Jr. showed up in a tuxedo for the screen test, the true Tony Stark style, greatly impressed the executives of Marvel and was immediately hired for a then-hefty sum of $2.5 million along with a bonus if the movie was a hit. It was renegotiated after the Iron Man‘s success.

Which one of these facts didn’t you know about? Let’s talk about it in the comments below!