The minke whale is a fascinating animal that you have never heard of! This majestic ocean creature has been overshadowed by more glamourous and hashtag-worthy aquatic animals like the killer whale, orca, and blue whale. Although the humble minke whale may not be as popular as some other animals, they deserve just as much love and attention. 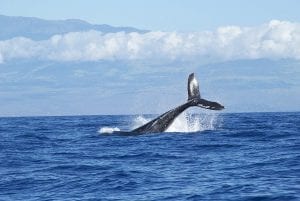 To rectify this amazing animal’s heartless neglect, we have compiled a list of the 13 best facts about the minke whale.

What Are Minke Whales?

Minke Whales are a type of Baleen Whale. The white band on their dorsal fin and their baleen plates characterize these aquatic mammals. Minke whales are divided into three main sub-species: the Common Minke Whale, the Antarctic Minke Whale, and the dwarf minke whale. 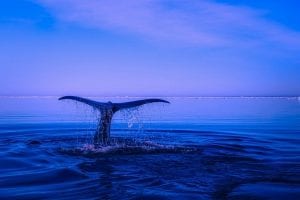 Minke Whales are part of the mammal family called rorquals. They are closely related to notable whale species like the Humpback Whale, the Fin Whale, the Bryde’s Whale, the Sei Whale, and the grandiose Blue Whale. Minkes may be the middle-child of this reputable family, but they are equally as important.

Being less popular does have its advantages, however! Unlike its famous brothers and sisters, the Common Minke Whale is not endangered and has been classed as in the ‘least concern’ category of wildlife conservation.

Minke Whales are the second smallest species of Baleen Whales. The Pygmy Right Whale beats the Minke by a hair.

These creatures measure just 6.9 meters on average upon reaching adulthood. The females of the species are slightly larger, measuring 8 meters in length on average.  This is just a tiny bit shorter than an average London bus.

The largest of these whales measure around 10 meters in length, about the size of a standard doubles tennis court. When compared to other large whales & great whales in the Baleen family, like the Blue Whale, which measures 25 meters on average, this is quite small!

Both male and female Minke Whales weigh 4-5 tonnes as adults, which is also relatively small for a typical whale. 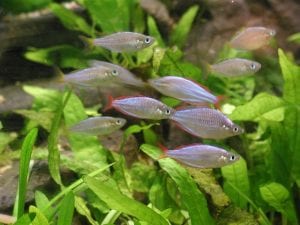 The way that Baleen Whales like Minkes feed is fascinating. They will begin by finding a school of fish or a location rich with sea critters like krill. They will then swim through the area while keeping their mouths open in order to gulp up the water. They then force the water out of their baleen (commonly referred to as the ‘blowhole’), trapping their prey inside.

Minke Whales do deploy some predatory techniques, however, to catch their prey. The whales will often swim in circles around the fish and krill, decreasing the circle’s diameter as they go. The resulting effect is that the sea critters are trapped inside a smaller and smaller area until they can be swallowed up on one big gulp by the Minke!

You may have noticed distinctive pleats on a Minke’s throat and wondered what they are used for. Amazingly, these pleats are extra folds of skin that allow for the Minke’s throat to expand to ingest large quantities of water during feeding. 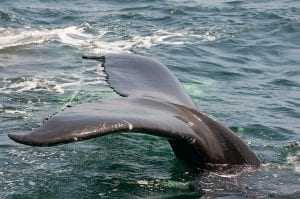 Minkes are not very social animals. They spend most of their lives alone, only meeting to mate.

Minkes reach sexual maturity at six years of age, after which they will go out in search of a mate. Minkes only breed in specific mating seasons and then separate again until the next time they need to mate.

A Minke’s pregnancy, or gestation period, lasts ten months, not much longer than our own pregnancies. Also, like humans, Minkes only have one child at a time. This is because both humans and Minkes are K-selected, meaning we have one high maintenance offspring rather than a litter of low maintenance ones.

Minke young are weaned for around six months. During this time, they will go from 2.5 meters to over 5 meters in length.

.Killer WhaleBeing K-selected means that Minkes, like us, live long lives. The average lifespan of these whales is around forty to sixty years!

This life expectancy is also aided by the fact that the only real predator to the Minke is the Killer Whale. These whales hunt the Minkes in packs, and the tense chases can last up to an hour! Minkes will try to lead their attackers to the open ocean, where it is easier to escape.

This may be a reason why there are 800,000 of these whales in the wild today – the highest number of any species of Baleen Whales. 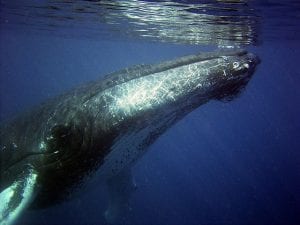 The call of a Minke is astonishingly loud. These whales have been recorded vocalizing at 152 decibels. This is almost as loud as a jet plane taking off!

Usually, whales make sounds to communicate, locate food, and find each other. Since Minkes are not social creatures, they likely use these loud calls to locate others during the mating season. They need to be loud to ensure that they will be able to find a mate no matter how far away they may be.

Minkes make a range of vocalizations and sounds, including clicks, grunts, pulse trains, ratchets, thumps, and even comical ‘boings!’ These distinct calls vary massively depending on species and geographic location.

These beloved animals have gained the unfortunate title of ‘Stinky Minkes!’ These majestic ocean animals give off a pungent odor when they spout (expel water through their baleen). 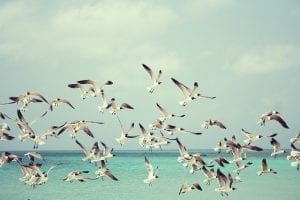 Where there are sea birds, there will most likely be Minkes. Researchers believe that Minkes follow sea birds in search of food. The birds can find food easily from up in the sky, and it is much simpler for the whales to look up at where the birds are rather than trying to locate the food themselves.

Also, like birds, Minkes migrate to warmer waters during the cold winter months. They travel to the North or South poles in the spring and summer months and back towards the tropics in the fall and winter months. According to research, some of these whales travel as far as 398 to 424 kilometers during their bi-annual migrations to and from the Northern Hemisphere. 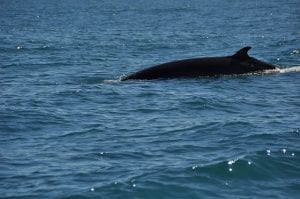 Minkes have extraordinary swimming patterns. These whales breathe three to five times at the surface, usually in short intervals before dipping their heads back under the water. Then, the whales will dive deep into the blue abyss from anywhere between two and twenty minutes! You can tell when a Minke is about to deep dive because they almost always arch their backs gracefully before a dive.

Minkes are also incredibly fast. Minkes can reach top speeds of 24 miles per hour (38 kilometers per hour). For comparison, this is the same speed as a Vespa auto-scooter.

The scientific name for the Minke whale means both ‘winged whale’ and ‘sharp snout.’ Contrary to popular belief, though, the species was not named by scientists. Minkes got their names from the amateur Norweigan whaling spotter Meincke who mistakenly believed the humble Minke to be a Blue Whale. So, the whales were named after him. 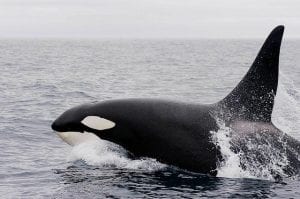 Did you know that Queensland, Australia is the only place in the world where we can swim with Dwarf Minkes? In particular, Ribbon Reef is teeming with the adorable whales as well as countless other sea animals like sharks, turtles, and manta rays!

Dwarf Minkes are the only animals that have a predictable aggregation. Every year during winter, these stunning creatures make the journey down the southern hemisphere to Ribbon Reef.

Despite their predictability, Minke migration patterns were only discovered very recently. Rob Prettejohn dove into the Great Barrier Reef in 1981 and discovered the weird and wonderful Minke migration, but he mistakenly assumed they were Orcas (also known as Killer Whales). Only when he contacted, the Queensland Museum discovered it was an entirely new species – the Dwarf Minke. 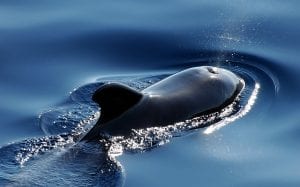 Minkes are naturally curious and seek to inquire about any new objects they may encounter. This is why you will often see video clips and nature documentaries where Minkes swim up to ships and poke their heads out of the water (possibly to get a better look)!

Although they may be inquisitive, Minkes are elusive creatures, and it was quite difficult to spot one in the wild until recently. Newer, more in-depth research means that we can now predict migrations and mating seasons reliably. So, we have unique opportunities to observe these bizarre whales in their natural environment. 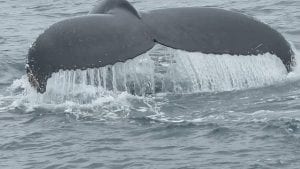 Besides their distinctive greyish purple color and striped fins, Minkes have many characteristic markings that tell us a lot about them!

You might have noticed the grey and white patches on the sides of a Minke’s body. These markings are unique to each whale, and whale spotters and scientists use them to distinguish the whales from each other. Those colored spots and stripes are the Minke equivalent to a human fingerprint.

If you want to determine the age of a Minke, however, you will have to get a lot closer! Minke’s ears build up waxy layers in their ears over the years. To tell how old a Minke is, you just need to count these waxy layers! You may have to be careful while doing this, though.

Minkes may be docile, but they are still massive six-tonne animals that could knock you out with a flap of their tail if they feel threatened! 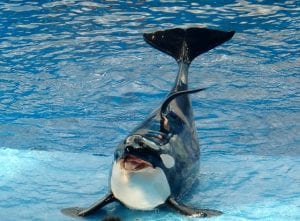 If reading about these gorgeous creatures has made you want to get a closer look at them, then you are in luck! Many places offer ‘swimming with Minkes’ tours so you can frolic with the whales safely. Mike Ball Dive Expeditions, Divers Den, and Spirit of Freedom are a few companies that have permission to hold tours that offer snorkeling and diving trips out to the Ribbon Reef, where minkes are found.

These tours are so limited because it preserves the sanctity of the whales’ environment. Minkes have been the subject of research at James Cook University, and they have partnered with local tourism agencies to devise the best, most sustainable diving plans.

The University and international wildlife conservation organizations permit these dives because tourists often contribute directly to the research through photo-identification, behavior research, and conservation efforts.

However, strict rules and regulations are in place to ensure that tourism and the research do not interfere with the Minkes migration patterns through the Great Barrier Reef. So, if you do decide to embark on this once in a lifetime journey, please stay respectful of the rules and mindful of your influence on the whale’s homes.

Minke Whales: Everything You Need to Know

Minkes have been shunted in the whale spotting community for too long. These beautiful sea dwellers are every bit as glamourous and interesting as their Rorqual brothers and sisters. Their unique markings, slender shapes, impressive size, and fascinating migration patterns make Minkes a species worth investigating. 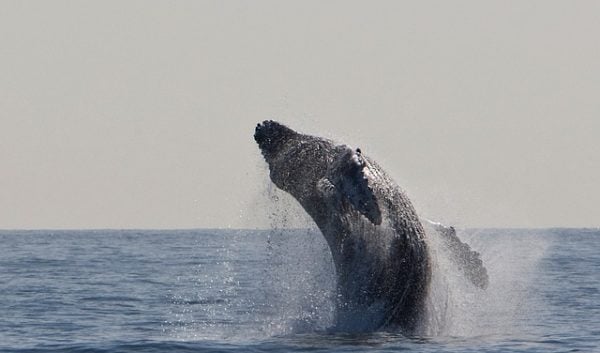 Minkes are like humans in many ways. From their fingerprint-like markings to their life history patterns, we can identify with these seemingly bizarre whales in more ways than you may expect. When you take into account the Minke’s ingrained curiosity and natural human inquisitiveness, it is clear that there is no species more worthy of our love and attention than the Minke.

It is a crime that we do not know more about this marine mammal. They were discovered so late and have always been mistaken for the aggressive Killer Whale. Minkes are gentle, docile creatures that would love being studied and spending time with humans. Not to mention, Minkes are some of the fastest Baleen Whales in the ocean, meaning that there is ample reason to take them into our care.

Just because they are not endangered yet does not mean that they never will be! We need to look out for Minke Whales just as much as we do for Blue Whales, Orcas, and Rorquals.

If you liked this piece on Minke Whales, be sure to check out more articles like this one.

Everything You Need to Know About Black Footed Ferret: Best 101 Guide

Interesting Information About Tigers You Didn’t Know: An Amazing Guide 2022