Most Popular Indian Food In the World 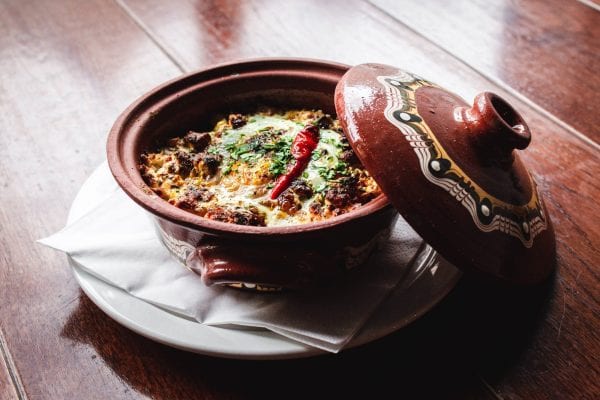 The most popular Indian food in the world is what you are looking for? India is known for its rich culture and heritage, also has certain popular dishes which are famous worldwide. Indian dishes mainly contain spices making them unique than other dishes.

People from across the country visit our country just to taste Indian food. Thus, Indian cuisine falls under the world’s most popular cuisine. Its flavors include, spices, sour, tangy, and sweet. Each region in India serves its own unique cuisine. Numerous dishes differing in varieties and types are available in India.

Here below are mentioned some of the top most popular Indian food in the world, let’s have a look.

Biryani is among the one dish which is served almost in each corner of the country. The taste, aroma, and smell are really mouthwatering. It’s also the favorite food of most Indian people. One plate full of Biryani is enough to fill your empty stomach. This dish is also significant for the Muslims as they serve it during Eid and other popular occasions.

Originally Biryani was introduced through Persians and the Mughals brought it to India. Biryani is a mixture of saffron rice with meat, eggs, boiled potatoes, and veggies. It also includes a blend of different spices to make it tasty. Each place in India offers its own unique style of Biryani. Some of the world-famous Biryanis are Karachi Biryani, Hyderabadi Biryani, and Lucknow Biryani. 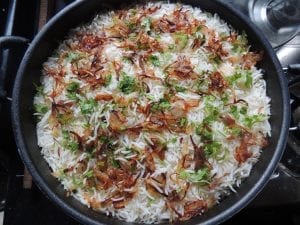 Another most popular Indian food in the world. Nobody ever wants to miss tasting butter chicken while in India. This dish is widely popular and almost every other India loves to eat butter chicken. It falls under the north Indian cuisine. Butter chicken is mostly served in the western parts of India.

The food just melts deliciously in the mouth. Roti, naan, kaali dal and green salad go best with the dish. Punjab is known to serve the best butter chicken. The method includes marinated cooked chicken into tomato sauce blend with butter, onion, garlic, ginger, and olive oil. This process makes the chicken more moist and delicious. One should really try this food when in India along with other side dishes. 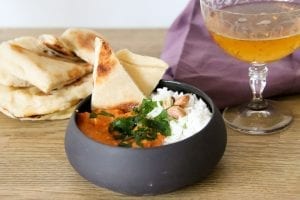 Who doesn’t love tandoori chicken? One of the best Indian dishes to have gain international fame. The food is known since 3000 BC. It’s named tandoori chicken after using the tandoor oven to roast chicken. A tandoor oven is a cylinder-shaped system burned with the help of wood or charcoal. It’s made of clay or metal giving a unique taste to the chicken.

Modern methods of preparing it include using a grill or a microwave oven. Chicken needs to be marinated and well kept either in the refrigerator or in a cool place for about 6 hours long. Better to keep it overnight. Also, add a few spices to make it tasty. After the estimated time the chicken is then well cooked in an oven. 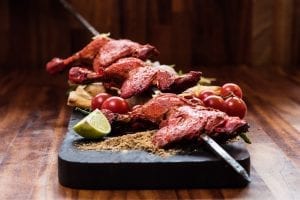 Chole also is known as chickpea curry is currently a worldwide sensation. Best served with bhature (big poori). The chickpea is favorite among many Indians especially in north India.

This dish is perfect to serve huge crowds of people. It contains many spices and herbs. The curry gives an overwhelming taste and goes best with poori or bhature. You can see this dish being served during puja occasions or in melas.

Once the chickpeas are ready, you can mix it with various other ingredients such as onions, tomatoes, garlic, and ginger paste. Indian spices add uniqueness to this dish. 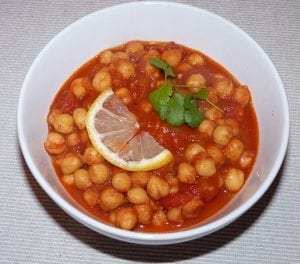 Kashmiri people call this food red lamb. Due to the use of Kashmiri dry chilies the lamb’s color turns red. First, it was originated in Persia and Kashmir influenced by Muslims. Cream added at the end makes this dish more mouthwatering and hot.

As the name says, it means mutton or lamb in red curry. The color is red due to the use of Alkanet flowers or roots and Kashmiri red chilies. A popular dish is known worldwide. Spices used here are quite long. To name a few are, cardamom, cumin, turmeric, and garam masala. Due to these spices, the dish can remain for a long period of time. Also, one should know that Rogan Josh is the famous and staple food in all restaurants in British.

Try having chaat, the best in Indian street food. It is served in every corner of the streets on stands and also on busy streets. A popular food either as a snack or dinner among people with different age groups. Especially the school children love to have it after school hours. Chaats include all types such as bhelpuri, paani puri, papdi chaat, pav bhaji, sev puri, ragda, and samosa chaat. 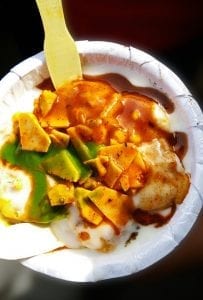 A very common and famous food in India. Every other Indian goes to buy samosas during evening time as a snack beside tea. Although samosas differ in shapes and sizes, it has the same filling. Usually, samosas are termed as Indian Calzones.

Samosas have a deep-fried crusty exterior and the interior is filled up with mashed potatoes, a variety of veggies, meats, and lentils. It is best served together with tomato sauce, chutney, mint sauce, tamarind sauce, or tea. Samosas can be found in street food outlets and sweet shops. It was first originated from the Mughals. Presently its served in the middle east also.

During the evening you’ll notice huge lines in front of samosa shops and it gets over really soon if you don’t catch up soon. 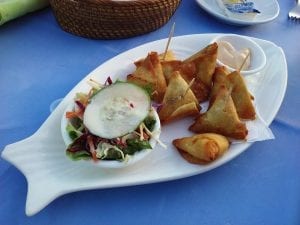 An Indian curry serves best with naan that is unleavened bread. It’s made heated upon a clay oven. Naan is not eaten solely but acts as assortments with meat, veggies, or egg items. It is baked over the tandoor oven with the help of charcoal or wood fire.

Although, you can have it separately without a curry by dipping it into a sauce or a chutney. An Indian meal is incomplete without naan. 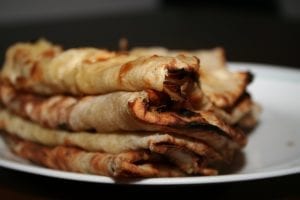 Malai kofta is veggie balls mixed in the sauce. An alternative to meatballs. The curry sauce gives the blended taste of mixed spices and sauces.

Koftas are best served with pulao, jeera rice, and naan. In a bowl, add mashed potatoes, carrots, beans, sweet corn, and other veggies. Mix it well and make a ball out of it. On a pan add sauce, water, and other spices to make a tasty gravy curry.

Add the veggie balls in it and your malai kofta curry is ready. For more taste, you can add cheese in the balls or also add a pinch of milk in the gravy. Ingredients are easily found in the market. It just takes a few minutes to cook it.

Dal makhani is the favorite dish of Punjabi people staying in Punjab. Due to taste and deliciousness, it managed to travel even internationally. The food is taken along with roti, naan, or cooked rice. It is rich in calories and can fill an empty stomach.

Dal makhani gives dal a smooth, moist, and buttery flavor. It’s made out of whole black urad dal, kidney beans, cream, and butter. The mixture is very delicious and satisfying. Rotis like tandoori roti, masala kulcha, and plain chapati can also be served along with this dal.

Both the non-vegetarians and vegetarian lovers are in love with dal makhani. Visitors can’t really miss it and Indians don’t ever miss it. Maybe it’s a bunch of lentils in a bowl but gives you heavenly taste. 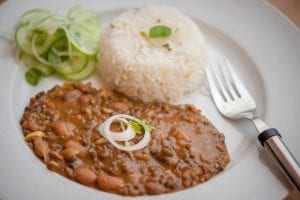 If you miss the gol gappa then you haven’t really explored Indian food. Since the gol gappas in India, many international countries opened its outlet. A street food loved by each and every Indian from children to old age.

Gol gappas also known as phuckas and commonly called paani puri. The term phuchka originated from the city of Kolkata and gol gappa from Delhi. It’s up to to you to choose whether you want a spicy or a non-spicy one. This street food can be found in every corner of busy streets and local markets. It gives you a hot taste of spices and lemons.

Gol gappas are round balls made of flour, the putting inside it is a mixture of mashed potatoes, various spices, and lemons. Aside it is served with water, which is also made with spices, dhaniya, red chilies and lemons. The paani .i.e. water and puri .i.e. gol gappa is really very tasty and mouth watery. You will always find a paani puri stall crowded with people. 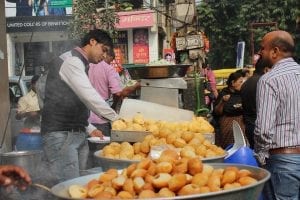 The most popular Indian dish and a favorite among vegetarians. It’s good for health due to the presence of spinach in it and fewer spices. Palak paneer contains nothing more than paneer, spinach, cottage cheese, and some regular Indian spices.

Spinach and fenugreek leaves give a green color to the dish. It goes along with cooked rice or roti. The spinach first needs to blend making a puree. Garlic, ginger, and other spices are added to the puree. After which deep fried paneer cubes are added into the mixture together with cheese and cooked on a medium flame. It is both delicious and nutritious. You can skip your green smoothie on the days you make palak paneer. 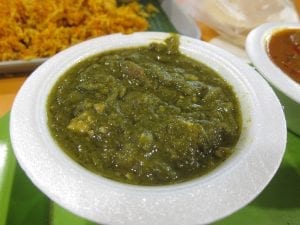 One of the top dishes being served in South India. South Indians and travelers love this dish. It’s not much heavy and quite healthy for the body. Although it’s not much famous in North India but has managed to make its place on the world map of delicious food.

It is best served as breakfast, lunch, dinner, or snack. There are different types of dosas such as plain dosa, masala dosa, cheese dosa, paneer dosa, rave dosa and onion dosa. Each restaurant offers unique styles of dosa.

Dosa consists of a crisp pancake made of fermented rice and black gram daal with potato stuffing inside it. Potatoe stuffings include mashed potatoes, veggies, and spices. Dosa is served with onion chutney, coconut chutney, and sambhar dal. Rava dosa is much crispier than masala dosa due to the presence of semolina in it. 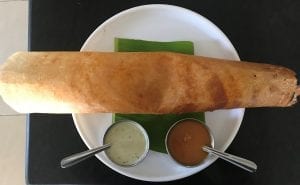 The masala chai or masala tea is India’s staple food. Without it India is nothing. You can find tons of chaiwalas at every corner in Indian streets and roads. While you stop your car on a red light, you’ll notice street vendors offering you tea. Any occasion, meeting, or marriage parties is incomplete without masala tea.

It’s considered to be one among hot beverages. You can have it along with snacks in the evening or drink it while you set aback watching the mesmerizing sunset from your window. One sip of it refreshes and rejuvenates you. These chains are drunk little from an earthen pot or small cup in a side stall or shack.

The tea is prepared brewing Indian black tea along with cardamom, cinnamon, ground cloves, ginger, and black pepper. Other than this you can also add lemon to it or other spices. Ingredients are said to be taken from ancient Ayurvedic texts. It has spread over all countries in abroad and international shops sell it in the form of tea bags attached with a variety of recipes.

But if you mix it with dairy hot milk, it tastes amazing and delicious. While visiting India make sure to taste the authentic version of masala chai. 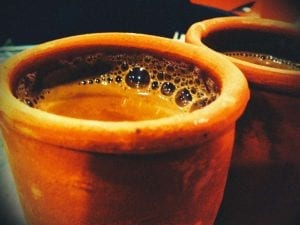 1 thought on “Most Popular Indian Food In the World”