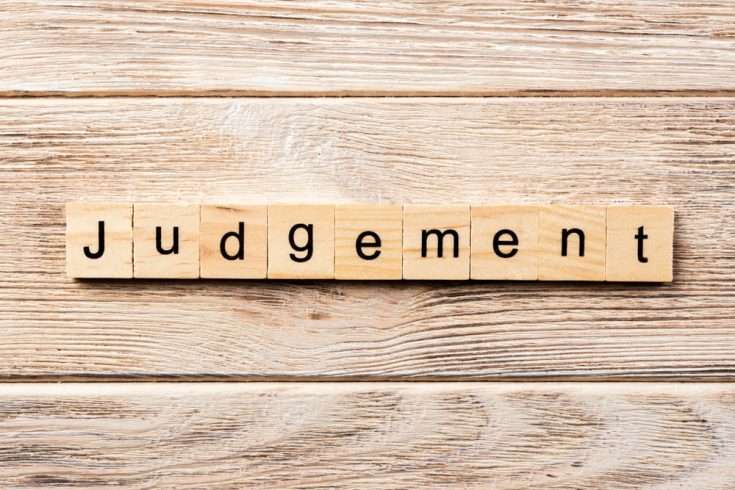 “There is only one lawgiver and judge, he who can save and destroy. But who are you to judge your neighbor?” – JOHN 4:12

What does judging someone actually mean?
The best theoretical answer to the above question would be as follows:-

“Judgment is the process on which perception but not knowledge rests. Judgment always involves rejection. It never emphasizes only the positive aspects of what is judged, whether in you or others. What has been perceived and rejected, or judged and found wanting, remains in your mind because it has been perceived…”

It’s not what you look at that matters, and it’s what you see.”- Henry David Thoreau.

I always like to joke that dying will be a relief because it will end the “heavy burden of judging,” as I call it. I envision myself lying in a hospital bed and, moments before death, noticing the ceiling and thinking, “What a hideous green.”

Here’s a modest proposal: vow that you won’t judge any person you know or do not know for the rest of the day. It could be a person with a particular race or religion, or class system. It could be a friend who is a non-stop talker or a friend who always complains about her life. It could be a stranger you pass by on the street or the one smoking a ‘sutta’ next to you while you drink your chai.

I call it a modest proposal because I am not even addressing self-judgment, let alone ISIS or Rahul Gandhi. NO, I’m just asking you not to judge friends or strangers initially.

It’s entirely possible that you won’t make it past a few minutes without judging someone!

We seem to live in a society where it’s normal and acceptable to judge people for all sorts of things- their choice of clothing, the food in their grocery carts, how they parent, who their friends are, the list goes on. I am certainly not saying I’m perfect and have never been guilty of judging others. But because I’m sensitive towards it and because I want to set a good example, I try my best not to jump to conclusions about others.

If you’re someone who has struggled with weight, maybe you can relate to someone else going through it right now.  It’s so easy to judge a person and say, “If they just gave up the junk food and got off the couch, they’d lose weight.”  You never know if that person has already lost 100 pounds and is halfway to their weight loss goal.  You never know if they have medical issues that prevent them from exercising or have been going through problems in their life that make weight loss feel unimportant at that moment.  Until I am in that other person’s shoes, I have no right to make those assumptions about someone else’s life.  I wish that everyone would take a moment to stop and think about how their comments, expressions, and thoughts can affect another person.

We are not authorized to judge others either openly or silently. Because we never know what they are going through or what circumstances led them to make the decisions. People have their own right to choose what’s best for them; it’s their decision. People who judge have no right. Stand by those who are bullied by our society for being what they are. Support them with compassion, love, and care. Stand by them and support them.

We are not the judge here. “Only God sits that high.”