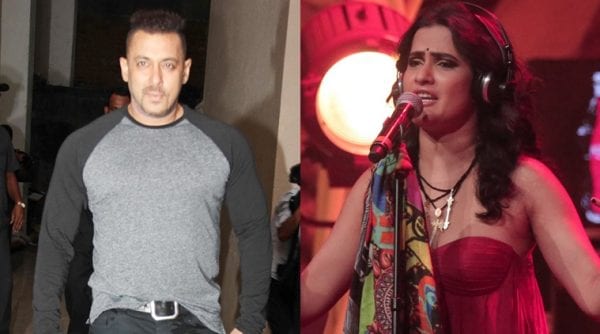 Salman Khan recently compared himself to a raped woman resulting in a lot of criticism from the public. Though many Bollywood personalities remained quiet and did not speak up, a few did.  But Salman Bhai remained strong as his fans did not stop showering him with love and stand in support of him. One such case of a Bollywood personality speaking up against Salman’s rape comment came forward due to the terrible tweets she was greeted with by Bhai’s loyal fans.

Sona Mohapatra, a singer, of “Ambarsariya” fame took to twitter to share her thoughts about how she felt angry at Salman Khan’s statement but once she did, she was greeted by many angry as well as abusive tweets by Bhai’s faithful fans and followers. “Women thrashed,people run over,wild life massacred & yet #hero of the nation,’Unfair’. India full of such supporters,” she tweeted. But within minutes of her tweet, Bhai’s fans took to twitter to shut her down. She received loads of tweets full of hatred, tweets that she only went against Salman for publicity. But this was not all as within the next 48 hours, Sona received calls where she was given rape threats, threats where she was told that her face would be photoshopped onto naked models and lastly, threats where she would get thrown out of the industry.

But the cyber bullying did not stop Sona as she took to Twitter, once again, to say,”Dear Bhai Chamchas’s, You continue to prove my point with every perverted, sick, cheap message you write to me.” However, Sona Mohapatra was not the only one who spoke up against Salman’s rape comment. Other Industry personalities such as Renuka Shahane and Anurag Kashyap also criticised Salman’s choice of words while social activist and rape survivor,Sunitha Krishnan, wrote an open letter to Sallu Bhai where she wrote that he was a “Disgrace” and how he “trivialised rape culture.”

Though, he is amidst all the controversy, Salman Khan has remained silent. His father,Salim Khan, however, took to twitter to apologise for his son’s remark. “Undoubtedly what Salman Said is wrong, the simili, example and context. The intention was not wrong,” Salim tweeted.