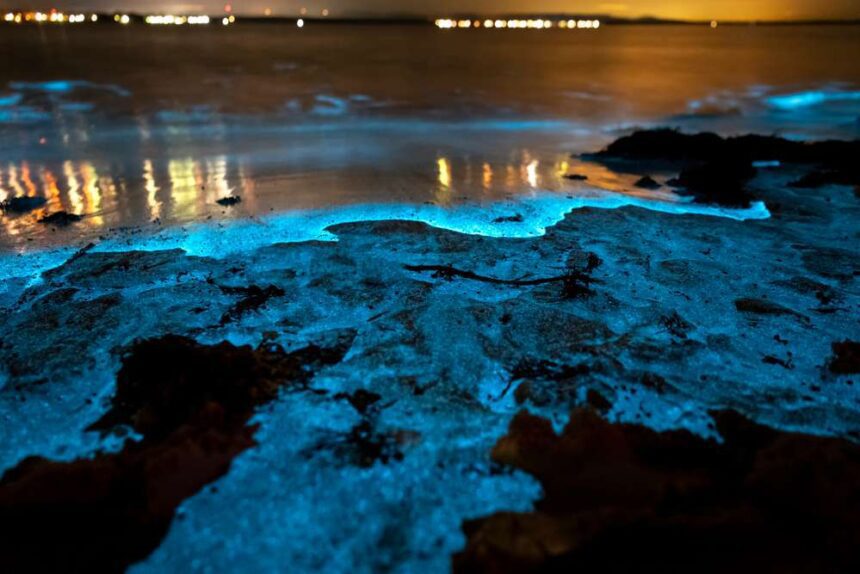 Bioluminescence is a natural phenomenon when a living organism produces and emits light from a chemical reaction. The reaction can occur outside and, likewise, within the cell.

When reacting with oxygen, the organism’s body produce light. There are different categories of luciferin based on each animal species/deep sea animals. Some produce luciferase that speeds up the reaction.

Scientists estimate that almost 90% of deep-sea marine life produces bioluminescence, such as bacteria, jellyfish, starfish, and crustaceans. Large numbers of deep-sea creatures use bioluminescence as an advantage to find food and reproduce.

Fireflies (lightning bugs) are land creatures also known to use their bioluminescent abdomens and tails to ward off predators and entice potential mates.

Bioluminescence creates a stunning sight by coasts and beaches when the dark night sky lights up with the bioluminescent waves.

The Science Behind Blue Bioluminescent Waves and Red Tide

The marine ecosystem consists of many life forms living in the ocean. Water covers 2/3rd of the Earth. Some are as deep as Mt. Everest is high and are even more significant than that. The Mariana and the Tonga Trench are instances that reach over 10,000m in depth.

As marine creatures are not spread evenly in nature, variations in the marine environment create different habitats and influence the organisms inhabiting them. Factors affecting habitats are light, water depth, land proximity, and topography.

Planktons are inhabitants of the pelagic domain. They are critical components in the marine food web, providing nutrition for other life forms such as crustaceans, fish, and sea squirts. Some plankton with the ability to photosynthesize wield an effect on balancing the components of the Earth’s atmosphere.

A dinoflagellate is a group of unicellular photosynthetic protists with important plankton components. Numerous dinoflagellates carry out photosynthesis, and some also consume bacteria or algae. They are known to create bioluminescent waves.

Dinoflagellates generate energy if there is a serious threat happening to their lives. This reaction lights up glowing bioluminescent waves seen at night and red tides/red light.

The colors of bioluminescence vary. Bioluminescent phytoplankton gives the waves a bright blue luminesce in the dark. Generally, most are blue, while others fall in the red, yellow, and purple range.

The Phenomenon of Light Transmission

The sun is vital to the world’s ocean systems as it provides the energy required for currents and waves. This energy converts into heat. A thin layer of warm water near the ocean’s surface forms that helps support marine life. Just as that, the transmission of light in seawater is essential to the oceans.

Marine plants with chlorophyll capture the wavelengths from the sun. They then make their food through photosynthesis.

When light penetrates, it will be refracted since it travels faster in seawater. It is then scattered or absorbed by the present solid particles. It penetrates till 10m of the water’s depth and nearly none below 150m.

When solid particles are abundant, it will decrease the amount of light penetrating. So, when turbid, seashore water reduces transmission because of particles brought by microorganisms, waves, and other water movements from river systems.

Since blue penetrates the deepest, most marine light emissions are in this spectrum. It is why deep, clear ocean water appears to be primarily blue. Clearer waters also have fewer particles affecting the emission.

The ocean layers, after much research, have been classified into vertical and horizontal divisions.

The ocean and large lakes have two vertical zones based on depth. The greater the depth of the water is, the lesser the light.

When sunlight penetrates the sea surface to about 200 m depth, it is called the photic zone. This illuminated zone consists of photosynthetic phytoplankton—the phytoplankton supplies sustenance essential to the marine food cycle.

The euphotic zone can extend to 80 to 100m and the disphotic from 80 to 700m. One can find that most marine life forms live or dwell in the photic zone, particularly the euphotic area.

Below this, one can find the aphotic zone, the Midnight Zone, or the Abyss. It is an area of inky darkness. Light cannot penetrate here, and so, photosynthesis is not possible. A relatively lesser number of marine organisms live here. This zone covers the ocean bulk.

Marine life forms in the aphotic zone migrate vertically to the photic zone every night. Others like the tripod fish, sea cucumbers, and brittle stars remain here forever.

There are zones when the seabed is divided by the shore distance. Marine environments can be characterized as pelagic or benthic. Within the pelagic zone lies the neritic and the oceanic region. The neritic zone includes the water above the continental shelf, while the oceanic has its waters lying beyond it.

The neritic zone spans from low tide, gradually sloping downward till the seaward side of the continental shelf. There are high levels of nutrients here. Some amount of light penetrates here.

The rest falls under the oceanic zone from the bottom edge of the neritic zone. Sunlight does not reach.

Bioluminescent algae are tiny marine planktons that cause neon blue waves in the dark. This stunning natural phenomenon is seen when blooming algae are near the seashore, coming in riding with the waves or boats. The reason is that when the algae’s surroundings are disturbed, it emits a glow as a defense mechanism.

Dinoflagellates can be found illuminating the waters. As the luciferin molecules oxidize, the luciferase enzyme facilitates the chemical reaction. This species forms most algal bloom.

Michael Latz, a scientist, and researcher, is working at Scripps Institution of Oceanography at UC San Diego. He has much expertise in bioluminescence, bioluminescent waves, and the red tide.

Based on studies, Michael has stated that aggressive dinoflagellate species cause the red tide in San Diego. The Lingulodinium polyedra contains a sunscreen that gives it its distinctive reddish-brown color.

During the day, San Diego seawater turns a rust-colored tinge. Any movement causes the algae to emit its signature bioluminescent radiance at night.

The glow caused by algal blooms can be toxic to the environment and people.

One can find neon blue waves in Newport Beach, California. The phenomenon of bioluminescent waves is spotted occasionally in the shoreline of Orange County.

A photographer from Southern California, Patrick Coyne, captured stunning images and videos of dolphins swimming in the glowing waves at night. Surfers rode the bioluminescent waves off San Clemente and San Diego in California.

Bioluminescent waves are rare occurrences caused by dinoflagellates and are often seen worldwide. Some of the most famous glowing beaches and bioluminescent bays are on the following list.

The atmosphere’s chemical components affect the ocean, like when absorbing carbon dioxide and marine plants release oxygen. When pollutants are dumped into the sea by humans, the ocean’s chemical composition is affected.

Harmful algae bloom when humans add nutrients. High concentrations of toxic compounds add up, which accumulate in or kill filter-feeding organisms like oysters. If individuals eat such filter feeders, the result is illness or death.

Climate changes such as temperature, salinity, increasing CO2 concentrations, and added nutrients can likely result in a drastic shift in marine species. There will be a growth in harmful algae, jellyfish, and such species, which will, in turn, have a significant impact on the food webs.