Should Hema Malini Have Gone Back to Her Constituency?

BJP MP Hema Malini and the dream girl of Bollywood have been facing harsh criticism for posting pictures of her movie shoot. At the same time, her Parliamentary constituency was hit by violence on Sunday. A red-faced Hema Malini confessed that she was unaware of the happenings, as she was busy with her schedule. 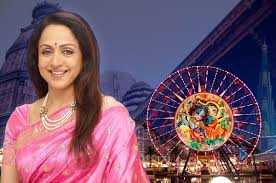 A total of 24 people lost their lives, including an SP and an SHO, in a clash between the policemen and the sect members who had intruded into government land in Mathura.

The MP said that she should not be blamed for the situation, as she was busy and could not have predicted the happenings. Moreover, she stated that as an actress, she had some commitment to her work, which was why she had to leave Mathura for the shoot. Malini told the reporters-“I went for shooting. I was unaware… So, I just tweeted. How do I know this was going to happen? My people in Mathura told me that there is no need for you to come as they are handling everything.” 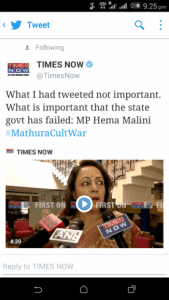 Malini had uploaded the pictures of her shoot but quickly deleted them and even expressed her heartfelt condolences for the SP and the SHO. She also assured everyone that she would go back to Mathura if her presence is required there. 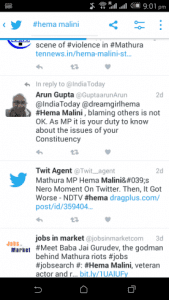 Reasons Why Hema Malini Should Go Back to Mathura

Being the MP of Mathura, it was her duty to be with the people of her constituency. Blaming someone else will surely not get her off the hook. The common people are infuriated at her irresponsible behaviour, and she has received a lot of lashing out on social media platforms. 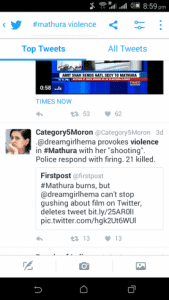 We cannot deny her commitment to her profession, but she should have also remembered the responsibility that she has to her constituency. It would be best to return to Mathura and stand beside her people to support them during this crucial situation. 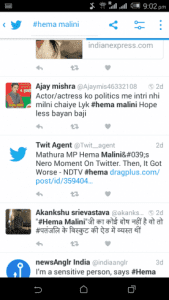 The Government is Equally Responsible

While blaming Hema Malini, we shouldn’t forget that the government of Uttar Pradesh and the CM Akhilesh Yadav should take charge and look into the state of law and order of the state. It cannot be ignored that along with Hema Malini, the CM of UP is equally responsible for this Mathura massacre.

Hello. I am a student of English Literature. Word keep on fascinating me and makes me grow further as a human being. I have always believed that words are powerful enough to bring about a revolution. I am here, just trying contribute, in my own small way to life