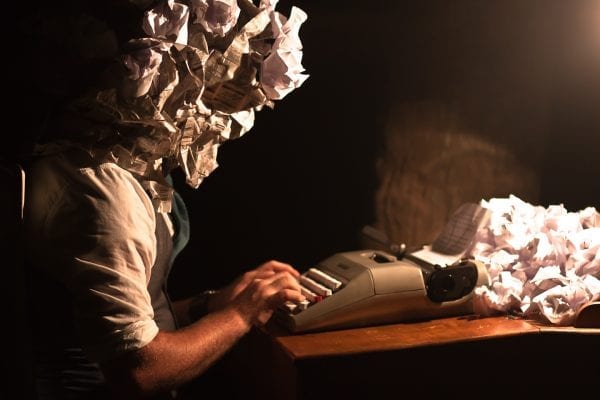 Let’s be honest and agree that we have all faced it. The big intangible wall that manifests itself time and again in our dreamy world of poems, metaphors, and artistry; every valiant attempt to rupture it only ends up with us endlessly banging our heads against the wall. We sit at it, sometimes for hours, sometimes for days on end, but the blind stare game with the blank sheet takes forever to cease like a stagnant marriage pulled on for too long. Where has all the romance with the pen gone?

Here’s exploring the different facets of the Big Block that every writer must have encountered at least once:

The foremost and the most ill-considered of all agonies “what to write”!

If you are anything like me, simply deciding on a topic to write about could be the most exhausting part. Forget about the blank pages yet to be filled. The muse seems to be eluding, and the pen is stuck for want of inspiration. Too often, this has been romanticized in poems and films; the writer is in despair after a continuum of blank pages, and out of the blue, his muse appears that propels a poetic wave in his pen. Now, I don’t discount the grandeur of all these but look into any writer’s desk, and the reality can be seen to be far too frustrating and dirty.

“What to write!” Probably the best answer to this brain-draining question would be listening to what the writer in you WANTS to write about. While the inspiration might seem to elude and you might wish to look for it in your next-door neighbor, on the streets, in films, books, and everywhere else; stop, and look inside…you will find that your inner self is desperately waiting to talk about something, laugh about something, contemplate about something, waiting to write about it.

Bring out that person and shut your inner critique, seize that mojo and begin your paper!

“It is easy to say, oh, I have a writer’s block, oh, I have to wait for my muse. I don’t. Chain that muse to your desk and get the job done.” — Barbara Kingsolver.

Well, the mythical muse has smiled upon you. You’ve got the inspiration (aka the topic), and you are ready to surf through the waves of pages but wait, there’s no “flow”! Another famous writing block; when your words seem constricted when your phrases seem derived from all juices, and the lines seem like the crappiest mass of words ever huddled together!

The muse peeps through the Iron Curtain and disappears, leaving you with frustration and desperation. You don’t get the right words; your pen just does not know how to express what your mind has engendered. You keep writing anyway, braving against the current of restraint.

Stop! Right there. There’s probably something that your mind, from a subconscious place, is trying to tell you. Admittedly, stopping in the midst of your tracks might feel defeating. But, at other times, having tolerated the continuum of creative barrenness for too long, the writing hardly matters anymore to you, and you want to get done with it anyway.

But really, stop and consider these questions: Does what you plan to write about really matter to you? True, it could be really interesting, really “out-of-the-box,” thought-provoking, but really, is it something that will quietly insatiate you? If not, refer to problem 1, and if it’s a yes, maybe you just need to get out and talk, eat, or play, chat, or sleep! Whatever feels good to you.

Drop your pens and do it! The perfect words, the perfect rhyme, metaphors, or onomatopoeia will come chasing after you. On a personal note, I write best when I am happy. It’s just the perfect drug that propels my juices in the most Keatsian manner.

Find your appetite and feed it.

“In the middle of writing something, you go blank, and your mind says: “No, that’s it.” Ok. You’re being warned, aren’t you? Your subconscious is saying, “I don’t like you anymore. You’re writing about things you don’t give a damn for.” You’re political, or you’re socially aware. You’re writing things that will benefit the world. To hell with that! I don’t write things to benefit the world. If they do, swell. I didn’t set out to do that. I set out to have a hell of a lot of fun”- Ray Bradbury.

The perfect dead-end to a creative quest; deadlines. Deadlines are real-time stress. For the likes of me, who are always running behind time, we keep procrastinating until the last moment and become panicky! Ideas seem far from view as the deadline haunts us…it’s a fight-or-flight moment.

Very predictably, the only rational solution of logical consequence is anti-procrastination, which in simple words would be starting at the project early! But while I am incorrigible, I believe so many more out there are, too, so the other thing we can do when the deadline hits in the face is to RELAX. Yes, that!

Relaxing will enable your senses to run, and you might soon be tapping into your “flow.” I just noticed I have been repeating this one thing all over the essay; but well; let’s remember that writing, like any other creative activity, is a left-brain phenomenon, and these areas of our brain need a lot of reposing, a lot of space, and just a lot more of pampering. So “KEEP CALM” like you mean it, you’ll be surprised how a calm mind has its own way of honoring deadlines.

“What I try to do is write. I may write for two weeks ‘the cat sat on the mat, that is that, not a rat.’ And it might be just the most boring and awful stuff. But I try. When I’m writing, I write. And then it’s as if the muse is convinced that I’m serious and says, ‘Okay. Okay. I’ll come.’” — Maya Angelou

I daydream a lot, and I expect too much. Yet, even before I have completed a sentence, I know how it will look like- like a really prolific piece that will usher a heap of praises on my way. I expect words to be stream through me, oozing out of my pen, carving calligraphy across the pages. It is obviously not a crime to expect that, but the only problem that persists is that it is so much about OTHERS; how we want OTHERS to perceive it.

Stop dreaming. When I get down to do the real task, I become hesitant because nothing seems good enough. After struggling with two sentences, I am convinced it will be trash of an immense magnitude and then begins all the questioning about your worth. I call it being trapped by your own vision. Well, that is the moment to break free and keep writing anyway…beyond doubts, beyond all hesitations. The magic begins to unfold when you let go, and dive deep, and get out of your own damn way, letting loose of nothing but your real voice and honest thoughts…that’s all that everyone else anyway wants to know, really.

I have a favorite idiom in the English Language; “tempest in a tea-pot,”; meaning “much ado about nothing,” or a big commotion over a trifling matter.

Weeks back I had sat down to write a romantic fictional account about a couple (romance comes easy), and wow! I was drained out. “To hell with all the mushy crap!” my frustrated self sighed. But deep down, I was feeling incapable, disappointed and questioned my talent. Sounds much like a “tempest in a tea-pot”? Well, after a lot of thought, I realized that romance is not my cup of tea. But, there are things I believe I do a fair job with, and that’s great enough!

So get inside and explore what feels really good to you, what feeds your writer’s appetite best for that could become your best shot! George Orwell sketches my frustration with romantic stories brilliantly in his novel, “Keep the Aspidistra Flying,” where the protagonist sets out with the dream of writing a great epic poem only to fail vainly.

“It was too big for him; that was the truth. It had never really progressed; it had simply fallen apart into a series of fragments.”– George Orwell.

An elaboration from our own great expectations is the apprehension of other’s reactions. It is then that the writing block emerges into a psychological barbed wire of fear and the only things that tie you down are your own little voices hovering around your ears “mocking” your writing, telling you it is not good enough.

Well, it is going to be a sea of opinions, and in the crowd of it, not every opinion is going to be “nice.” Writing is a vulnerable job indeed. Writing leaves so much to the mercy of others’ opinions, yet when a writer overcomes them and exposes his art, it is great. The real triumph is when we kill those darn “mocking birds” and move past them and keep writing; good reviews or bad. That is a real smash-down of the writer’s block; that is real writing; that is plainly and purely art.

While writing this, I was reminded of all the days that I spent on writing but never dared to hit the “send” button. So maybe it’s time I do so.

“He found the original sheet of paper and scored the couplet out with thick lines. And in doing this, there was a sense of achievement, of time not wasted, as though the destruction of much labor were in some way an act of creation.”
― George Orwell, Keep the Aspidistra Flying

P.S. Is there something blocking your creative sojourn, keeping you stilted, driving you nuts? Please share your story below!