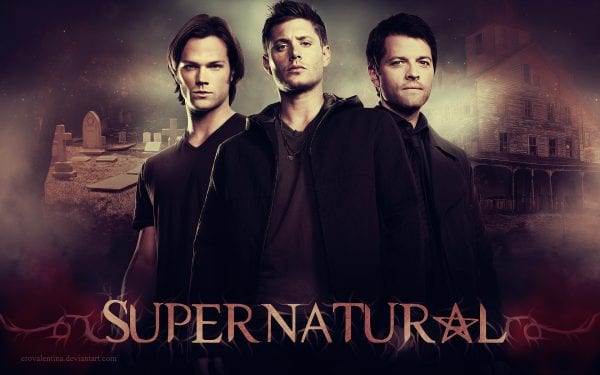 Supernatural is a fantasy harrow show on CW about two brothers (Sam and Dean Winchester) raised to be ‘hunters’ by their father after their mother’s untimely death when Sam was a baby. Mary Winchester, the boys’ mother, was killed by a demon called Azazel, who had previously made a deal with her that he would take away one of her children in 10 years. In trying to protect Sam, Mary sacrificed herself and set into motion the events of the show.

Supernatural began as a typical weekly horror show, with a week’s monster that the heroes had to slay. Demon-hunters by profession, Sam and Dean made it their business to hunt down and kill ‘things that go bump in the night’ – including, but not limited to, vampires, werewolves, wendigoes, witches, poltergeists, and women-in-white.

Dean put it best when trying to convince his reluctant brother to go on a search for their missing father in the pilot episode – ‘Saving people, hunting things, you know, the family business.’

Well into its eleventh season, the motto really has become true for the Winchester family – even the members that we didn’t know existed. However, there is much more to Sam and Dean’s supernatural adventures than would meet the eye.

In the 10+ seasons that the show has been on air, we have seen, among other things – the arrival of angels to earth, the (literal) rise of Lucifer, the Apocalypse with its four horsemen, death personified, the Archangels Michael, Rafael and Gabriel, a civil war in heaven and the earth being overrun by nasty little man-eaters from a purgatory called Leviathans. These are only the addition to the sheer awesomeness that was the visual of thousands of Angels literally falling from heaven in the finale episode of season 8! Cinematography at its finest, that was!

It is amazing to think how far Supernatural has come in terms of depth and profundity of narrative, going from little more than a kids’ show with buff heroes to a multi-faceted narrative with complicated mythical arcs and psychological storylines.

The ever-evolving plot of supernatural is only overshadowed by the remarkable growth that is seen in its characters. The legendary chemistry between the three leads – the Winchester brothers and their pet angel, Castiel – is part of the reason that the show is still going strong after so many years. Even when the storylines were flagged and the narrative almost fizzled out, it was the characters that kept Supernatural afloat, imbuing the show with an emotional depth and maturity not often seen in traditional horror or fantasy fare.

The chemistry and bond between the lead actors – Jensen Ackles and Jared Padalecki – playing the Winchester siblings is amazing enough to watch. When Sam died at the end of Season 2, Dean’s heartbroken tears and his subsequent decision to sacrifice himself to hell for his brother nearly did me in!

But Castiel, the befuddled angel with the gravelly voice played by actor Misha Collins, waltzed onto the Supernatural sets in the first episode of Season 4 and took the show by storm, sweeping fans off their feet with his low, gravelly voice and his wide-eyed, blue gaze. Together, the three of them made up the iconic ‘Team Free Will,’ and there has been no looking back for Supernatural since!

One of the very few TV shows to have crossed the 10-season mark, Supernatural (the show that launched a million fanfics), can at this point be considered one of the future classics of American TV. Certainly, the audiences seem to love the show and can’t get enough of the delectable trio – as they fight Heaven and Hell to defy fate and keep each other alive. And, of course, keep the ratings soaring! Hell, if the fans had their way, Supernatural would probably outlive us all!

So if you haven’t watched this amazing series yet, start in on it now! Believe me, and you won’t regret it.