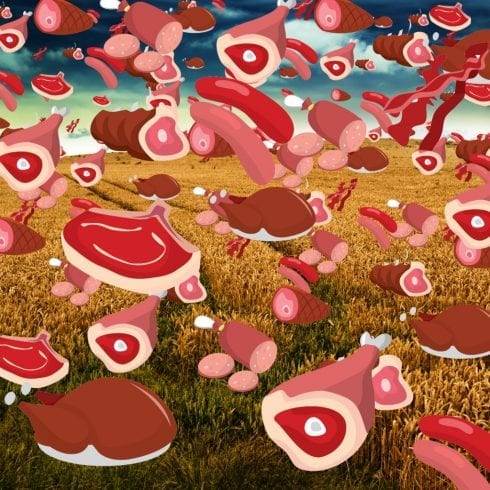 What Happened And Where?

What would a person expect on a happy summer day with a clear sky? Peace? But Allen Crouch found meat raining down on her. On 3rd March 1876, large chunks of flesh fell from the sky over Olympia Springs in Bath County, Kentucky. Allen Couch was out on her field making soap when “the meat, which looked like beef, fell all around her.” The sky was clear at the time, and she said, “it fell like large snowflakes,” as reported in New York Times in the following week. Most of the pieces were approximately 5 centimeters (2.0 in) square, and one was at least 10 centimeters (3.9 in) square. 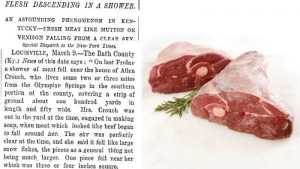 It sure turned out to be a fun day for the dogs in the area who devoured and relished the meat. This incident also caught the attention of media and other people at Olympia Springs in Bath County. Two men who tasted it were determined that it was either “venison or mutton.”  The local butcher declared that it looked like mutton to him, but the smell was different; it was neither flesh, fowl, nor fish. Another explanation suggested by Crouches and chemist Robert Peter was that the meat was vomited by a passing flock of vultures “ who had been feasting themselves more abundantly than wisely” on a carcass. But how big was the flock that it could cover 500 square yards? 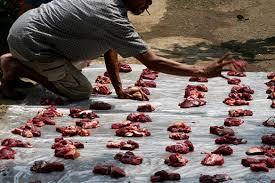 The mysterious rain that had the world talking had to be solved. Alexander Tenny Parker took it onto himself, and he transported the sample of the meat around the country (Not to common people, of course).  Through a journal called the Sanitarian, Leopold Brandies declared that “it was a Nostoc, a strange-looking vegetable mass (now recognized as cyanobacteria)  that is translucent, with gelatinous bodies joined together by thread-like tubes or seed-bearers.”

Doctors Allan McClane Hamilton and J.W.S. Arnold identified it as a lung tissue either of a horse or a human infant. Meanwhile, Dr. Mead Edwards, after examination, determined that it was the bits and pieces of cartilage. Edwards concluded that they definitely were of animal origin. 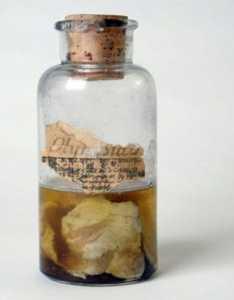 According to “New York Times March 11, 1876” and “New York Times, March 12, 1876,” Capt J.M Bent of Mount Sterling arrived in Louisville with samples on March 10th. When examined by Professor Lawrence Smith, these samples were determined to be “dried spawn of babechian reptiles.” He believed that the wind transported it from ponds or swampy grounds. He also referenced a similar flesh fall from 1675 in Ireland- as recorded by Muschenbroeck.

Although different people had different things to say about the meat shower, the inexplicable incident was not forgotten, and research went on for years after the incident. Charles Fort, in “The Book Of Damned,” 1919, suggests and then dismisses the idea that the meat could have been star jelly. It smells like rotting flesh and sublimates within 24 hours of landing on the ground. Fort dismisses this idea as it does not address the fact that blood was scattered about the ground. This single fact also dismisses the Nostoc and Frog Spawn explanations. 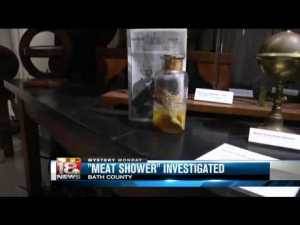 Whatever it had been, and however it came, the Meat Rain was surely a blessing to the dogs and probably a warning to humankind.