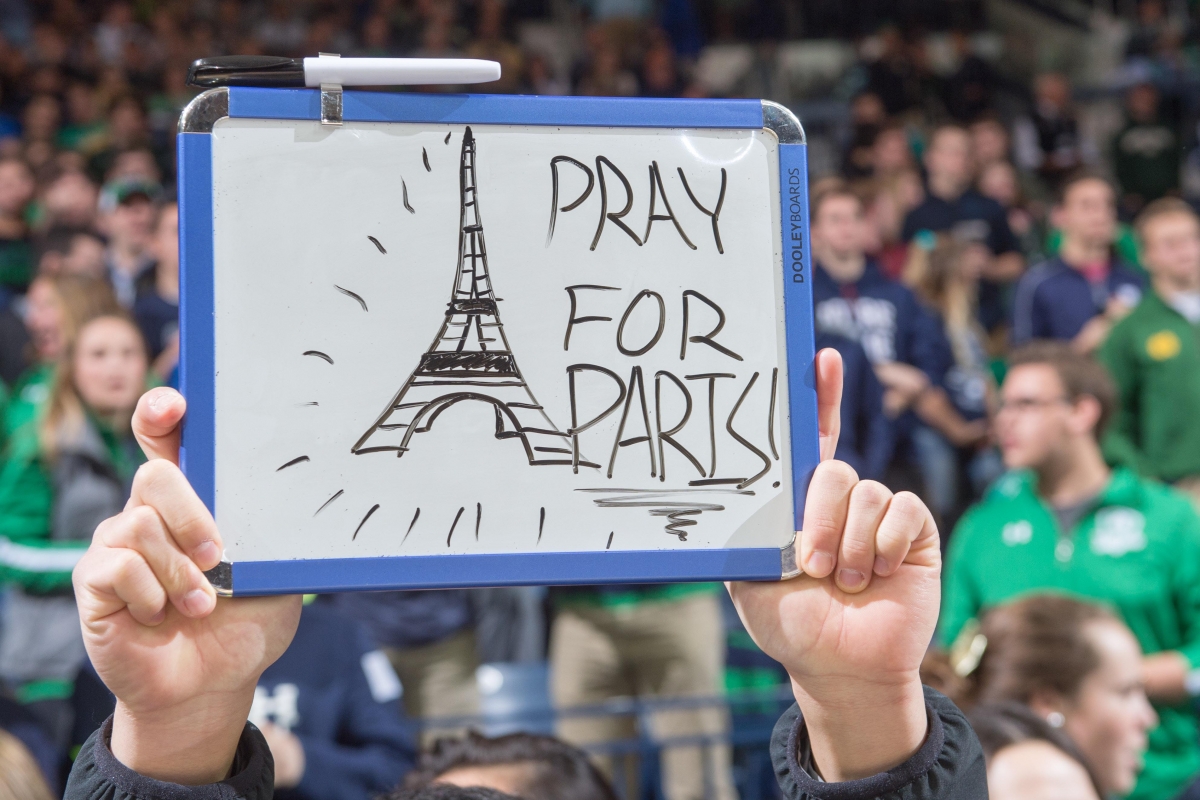 Yesterday morning, I woke up to Facebook telling me that my friends in Paris were marked as ‘safe’. In my drowsy naivete, I thought that they were celebrating a ‘safe’ Diwali. Then, as I went through my newsfeed, my naivete was quickly replaced by shock. Confusion. Sadness. The #PrayForParis quickly became the most dominant thing in my newsfeed.

And for good reason. On Friday, the 13th of November, Paris was racked by a series of attacks- bombs and shootings,taking the lives of hundred and twenty nine people, and counting. The Paris attacks quickly became a tragedy felt by the rest of the world, with people all over mourning and changing their display pictures to the colors of France.

It all started at 9:20 pm, at the D entrance of the Stade De France, while France and Germany were playing a soccer match. Moments later, a second blast occurred in the stadium – both were carried put by suicide bombers, who, heartbreakingly, well and truly believed that they were acting for the greater good.

Both, CNN reports, were wearing similar explosive belts, with batteries, bolts, and buttons. Both blasts took place on the same street, Rue Rimet.  French President Francois Hollande was in the stadium watching the match. There’s  a video going around, a video of an 8 second reality, of when the people in the stadium first heard the explosions.

They didn’t realize what was happening of course, for all they knew, people were just bursting firecrackers or something. Their expression of pure, ignorant confusion was caught on camera. The scariest part weren’t their expressions: the scariest part was the fact that they were literally seconds away from death, the scariest part was that as viewers, we know that this 8 second video has a sad, sad ending. Four people were killed outside the stadium, at the Paris suburb of Saint-Denis, one of them was a man walking innocently by the side of the bombers.

The terror continued at 9:25 pm, at restaurants Le Carillon and Le petit Cambodge, when the shooters arrived in a black auto to the scene at the corner of Rue Alibert and Rue Bichat in Paris’ 10th district. The masked gunmen killed 15 people, with 10 more seriously wounded. A 100 shell casings were discovered at the site.

The story continues: 9:30pm saw the second explosion at the Stade de France, 9:32pm saw a shooting at A La Bonne Bierre, where 5 people were killed and 8 were seriously wounded, 9:36 pm saw the another shooting at the La Belle Equipe, with 19 deaths and 9 more wounded, 9:40pm saw the double attacks at the Comptoir Voltaire and the Bataclan, 9:53pm saw a third blast near the Stade de France (about 400 meters from the stadium),and it all ended at 12:20am saw a subsequent a raid at the Bataclan, with the French Elite Police storming the area more than 2 hours after terrorists shot and slaughtered the concerts patrons.

Patrons hid for hours as the shooters chose their hapless victims. Survivor Denis Plaud later said, “There was blood everywhere. Even people alive were covered with blood. There was especially on the ground floor a lot of dead bodies and blood, and some people had been alive and had to stay for several hours among dead corpse[s] and they went out covered with blood.” Authorities later reported that about 4 people in the Avenue De Repulblique. And so, the hours of terror finally came to an end.

The attacks were a reminder of the Charlie Hebdo shootings, how even the beacon of freedom, the home of Liberty, Fraternity, and Equality could become the target of terror. However, as we mourn the deaths of a hundred and twenty nine innocent people, we must not forget to mourn the deaths victims all over. In Beirut, Japan, Baghdad, to name a few. We change our profile pictures to the colors of the French flag to show our solidarity, but is that us basically admitting that some lives hold more values than others? We mourn for Paris, but maybe we should mourn for the world instead? For the inhumanity that seems to transcend boarders.

“Et tu, Brutus?” (you too, Brutus?) were Julius Caesar’s famous words to his trusted companion, and ultimate betrayer, Marcus Junius Brutus. It was Caesar realizing that Brutus, that humanity, had ultimately betrayed him. Just as humanity has betrayed Paris, and the rest of the world. The terror organization ISIS has taken responsibility for the attacks, and theories about the refugee crisis being used as a a tool for the attacks are flying around. Once again, our humanity is in question. Do we turn our backs on the thousands who need us because of the actions of a few 100? Or do we stand, once and for all, in solidarity? Do we let our solidarity go beyond a simple hashtag and DP change? Is this when we finally realize that tragedy and humanity have no boarders?

“Later that night, I held an atlas in my lap, ran my fingers across the whole world, and whispered where does it hurt?