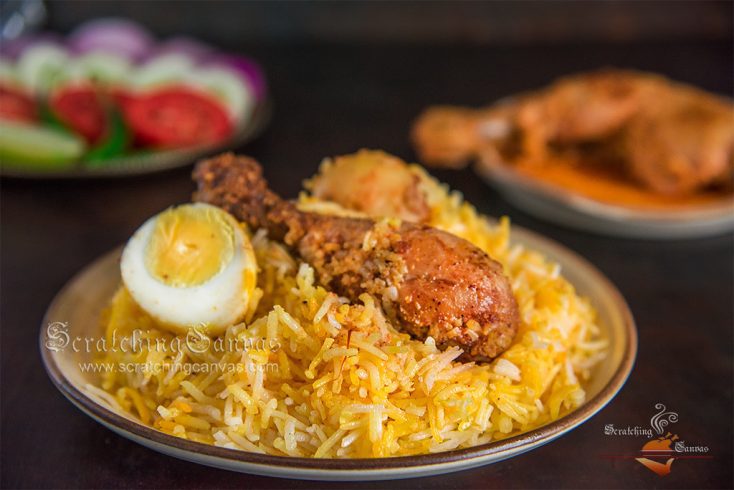 From Persia to your plate, Kolkata Biryani is the most relishing dish among people. Biryani is a combination of yellow-colored basmati rice, meat, potato, or egg cooked together and whipped up with saffron, spices, and kewra water, which adds a rich aroma to the dish. The dish came from Persia to India through the Mughals, and it is believed that it was first made in Shah Jahan’s kitchen by his wife, Mumtaz Mahal.

Perhaps, many legends are associated with the evolution of this dish, and it was further developed in the Mughal royal kitchen. The only difference between Awadhi or Lucknow style biryani and Kolkata biriyani lies in the addition of golden brown potatoes in the dish, which made the recipe tastier and mouth-watering.

When Nawab Wajid Ali Shah, the 10th Nawab of Awadh (now Lucknow), was exiled in 1856 at Metiabruz in Kolkata, a large number of people accompanied him, including his personal chefs. He was the first to introduce potatoes and boiled eggs in biriyani, which added a delight to the unique taste of Kolkata’s biriyani. From street food shops to 5-star, every food joint serves biriyani, and the price also varies from Rs50 going up to Rs700 (as in a 5-star). Here is a compilation of the best biryani restaurants in Kolkata for biriyani lovers.

Why are Potatoes Added in Kolkata Biryani?

In the early 16th century, Potatoes, tomatoes, and chilies were cultivated in India for the first time by the Portuguese. After some years, the English traders brought it to Bengal. Potatoes then were an exotic vegetable and were not easily available.

History says that when Nawab Wajid Ali came to Calcutta in 1856, he thought that Awadh would be handed over to him, but ultimately, that didn’t happen, and the revolt of 1857 started. Nawab Wajid Ali was kept captive for 26 months. After he was released, he settled in Metiabruz, which became a mini Lucknow with chefs, hakims, artisans, and musicians thronging to that place.

The Nawabs were great lovers of food and encouraged new recipes. In one such experiment, the chef added the rare potatoes to dum biryani, which was greatly liked and praised by the Nawab.

Since the history of adding potatoes in biryani, Kolkata biryani still follows the same legacy. Hence, the addition of golden-brown fried potatoes added a new flavor and showed a new dimension to the recipe, which was unconventional.

It serves the best biryani in Kolkata and the authentic taste of Mughlai dishes. One of the most famous restaurants in the city for biryani, it was first opened on 6th October 2002 at Park Circus, 7th point crossing. Apart from biriyani, the restaurant also serves a variety of side dishes that go well with your biryani, such as Chicken Chaap, Chicken Lahori, Chicken Kasha, Murgh Tikka Butter Masala, Murgh Makhani, and so on. It also serves amazing starters of kebabs and rolls. Their biryanis might seem to be cheap, but it is worth it. After having your biryani ending your meal with the dessert firni will fulfill your appetite.

It was established in 1929, with the slogan ”The Taste You Love”, which is famous for selling both Awadhi and Mughlai cuisines. The first outlet was opened in Zakaria Street, opposite Nakhoda Masjid. In 1956, Ali Mohammad and Ali Baksh, the two brothers who initially ran a tea stall, became the owner of Aminia. Now it has several outlets in the city, taking from Chinar Park, Mukundapur, Park Circus Area, Behala, Sector V, Golpark, Diamond Harbour, Netaji Subash Chandra Bose Road, S.N Banerjee Road, Sodepur, Sovabazar, Chandni Chowk to Serampore branch, Barrackpore and few others.

A unique thing about Aminia is that it has its butchery, so the meat given is fresh. Aminia also contributes to societal welfare for old-age homes, NGOs, and orphanages. Aminia special biryani along with spicy Lahori Chicken will surely make your mouth water. They serve a mean plate of biryani at a cheaper rate. It serves Awadhi/Mughlai food with a good dining experience, ambiance, and services. It is ranked among the top 3 Mughlai restaurants in Kolkata and is one of the fastest-growing restaurant chains.

Shiraz Golden Restaurant, or Shiraz, was founded in 1941, and in 1956 it was termed as the ‘Golden Restaurant’ when it has already started exemplifying the craze for biriyani. Shamsuddin Bawarchi was joined as a cook in 1972, one of whose ancestors was a cook of Nawab Wajid Ali Shah. Apart from Awadhi or Lucknow cuisines, it also provides North Indian and Arabian delicacies.

Shiraz might look like e local eatery, but its biriyani will touch your heart. The restaurant has embellished the ‘Dum Pukht’ style of cooking biryani (a popular North Indian style of cooking in low flame) with aromatic spices and dried fruits. The oldest outlet of Shiraz is located at the intersection of Park Street and Mullickbazar. It has outlets in Ajaynagar, Kakurganchi, Jessore road, Sector IV, EM Bypass, and some others.

Oudh 1590 carries the rich legacy of Awadh’s cuisine and Nawabi culture the royals have left behind. The customers can experience the traditional Nawabi culture of Awadh or Oudh through music, art, costume, furniture, décor, ambiance, and above all the delicious food with great taste. The grand architectural designs, bronze crockery, cutlery, glass chandeliers with the Thumri and Ghazals being played in the background will take you back to the time and world of Nawabs and the rich standards of their culture.

Oudh serves a wide range of variety in biriyani cooked in ‘Dum Pukht’ style such as the Awadhi Handi Biryani, which is cooked in Awadhi style and served in an earthen pot, Raan biryani which consists of mutton leg and rice cooked in dum pukht style, Jheenga biriyani is cooked with prawns, Moti biryani cooked with minced mutton balls, Murgh Parda Biryani, Awadhi Palak biryani with a refreshing taste of spinach and rice and many more.

There are also side dishes such as Gosht Shahi korma, Gosht Chaap, Mahi Kalia, Gosht Bhuna, Gosht Chaap, Murgh Irani, or Murgh Chaap go well with your biryani. Oudh has a variety of chicken and mutton biryanis.

It serves North Indian Biryani and Mughlai cuisine with a complex blend of spicy flavors and aromas with soft aloo that is going to melt in your mouth. They also serve raita along with the biryani. An array of soft-juicy kebabs and Tawa dishes have won the hearts of many. Mr. Rohit Chowdhury, Mr. Sayantan Saha, and Mr. Joydeep Saha are the owners of Kareem’s Kolkata.

It is one of the most popular restaurants for Kathi rolls, kebabs, beef biryani, and Hyderabadi biryani. Nizam’s was set up by Raza Hassan Sahib in 1932 in the bustling  Area of New Market formerly known as the Hogg’s Market. This place is famous for chicken and mutton Kathi rolls and its unique taste of kebabs.

The Kathi Kebab rolls range from Rs45 up to Rs130. The Chicken Kathi Kebab costs Rs210, with 20 pieces of chicken in it, same for the Mutton Kathi Kebab that costs Rs230. Hence the Kathi Kebabs are cheaper compared to the quantity it serves. They also serve Kolkata biryani and parathas. The place might not be so attractive to look at, but they serve amazing delicacies.

Royal India Restaurant is famous for its North Indian and Mughlai cuisines, and it serves one of the best biryani in Kolkata. It was established by Mr. Miah in 1981 when Miah himself was the chef of the restaurant. The Royal in the Park Circus Avenue is the oldest one, and later it has opened another branch in Sector V.

Here you will get the original recipe of Lucknow Biryani. Potato is optional in the Royal’s Biryani. Apart from Royal Chicken or Mutton Biryani, the other signature dishes of this restaurant are Keema Mutter, Mutton Chaap, Dhania Chicken, Mutton Haleem, Mutton Pasinda, Sahi Tukra, Murgh Zafrani, Murgh Lababdar and so on. The restaurant is also good in ambiance and décor.

The other popular places such as The India Restaurant at 34, Karl Marx Sarani, is most popular for serving Mutton Khacchi Biriyani and Daryabadi Biryani. Dhaka Biryani House is a famous biryani chain that serves authentic Dhaka Biriyani at much cheaper rates. At a pocket-friendly budget, the Kabuliwala Biriyani serves its sinful biryani with a masala layer full of aromatic flavors. The Complimentary Burhani, which is a spiced yogurt drink, is a must-drink dessert in Kabuliwala restaurant.

Kolkata food has a plethora of dishes using a wide and, varied range of spices. An ideal meal of a perfect biriyani will fulfill your appetite. Nothing can be more mesmerizing than having a plate full of Kolkata Biriyani on a rainy day. Arsalan serves the best biryani in Kolkata among all. So, Biryani is mandatory when you step into the City of Joy. The smell of biryani will surely increase your craving and make your mouth water.

The Awadhi or Hyderabadi Biriyani might be popular all over India, but Kolkata Biriyani is unique in its taste with eggs and potatoes in it, still following the legacy of Nawab Wajid Ali Shah. You will get the best biryani of Kolkata in Park Circus Avenue, which has a variety of iconic restaurants serving biryani for years. Hence, Kolkata is the best place for Biriyani cravers as well as Biriyani lovers to get the best biryani of their own choices of taste. Thus, the essence of the dish will surely make you go insane and connect to your soul.