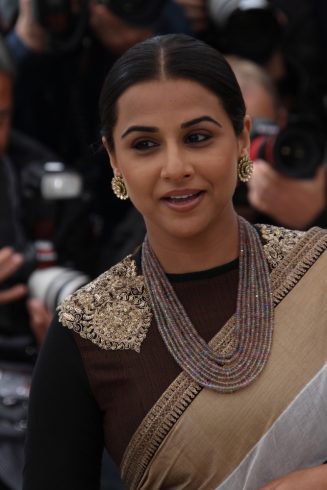 Vidya Balan is well known as one of the most modest and simple Bollywood personalities. Despite having a modern outlook and personality, she never lost touch with her Indian culture. She never hesitates in showcasing her true Indian character and pride in being an Indian.

She yet bears the traditional trends. It is a very noble thing. All the Indians respect her for that. Every day, her fan followers, throughout the nation post various comments on social networking sites, appreciating her true Indian spirit and modesty.

Whether clothes or jewelry or any accessories, Bollywood actress Vidya Balan has a strong affinity for traditional outfits. Her taste is entirely traditional and Indian. She prefers wearing designer sarees with designer jewelry, rather than western outfits and jewelry. Vidya showed the industry how a simple look can look so perfect and elegant.

In one of the interviews, she confessed that she was once extremely fond of five rupees earrings. Even during special events like award functions or special occasions, marriages, birthday parties, etc. Bollywood is always found wearing traditional apparel and ornaments.

The actress recently took out another eye-catching drape from her own collection for an e-interview. Check out the video below if you missed it. Vidya Balan wore a traditional saree, the perfect combination, a black saree with a plain blouse. Vidya Balan donned a black sari from House of Masaba for her virtual interview.

“Vidya purposefully picked a sari that she already owned because she wanted to send out a sustainability message again,” explains Who Wore What When stylist Pranay Jaitly.

Vidya Balan celebrated her birthday in an indigo-hued Jamdani sari by designer Urvashi Kaur, which she paired with a cozy, full-sleeved blouse.

Vidya Balan’s five rupees earrings are a different story together. She even wears those five rupees earrings when she feels that there is no need to dress up much or when she meets her parents. She does not care if people comment on her sober apparel. She loves to be simple rather than have a stylish personality. She is undoubtedly the humblest off screen.

Vidya Balan glammed up in a handmade silk saree for an e-interview on Tuesday, while also teaching us how to incorporate this traditional clothing into our professional wardrobe.

Vidya Balan wore a cream-toned silk saree with self-floral designs by Biswa Bangla and matched it with a metallic gold blouse for a classic white and gold look.

While we admire Vidya Balan’s conventional saree looks, she also knows how to put a fun and distinct twist on ethnic wear.

On Vidya Balan’s birthday, she wore an indigo-hued Jamdani sari by designer Urvashi Kaur, which she teamed with a comfy, full-sleeved shirt. Vidya picked a clean bun with a central part for her hair. She wore kohled eyes, naked eyeshadow, drawn brows, red lipstick, and a black bindi.

Vidya Balan is a huge fan of Rekha Ganesan, one of the famous Bollywood actresses of her time. She admits openly that she wants to resemble Rekha Ganesan and become a mirror image of Rekha. She wants to be a humble Bollywood like Rekha.

Many fan followers of Vidya Balan agree with the fact that not just her outfits, but also her personality, resembles that of Rekha Ganesan. Hats off to such a true fan follower.

According to Bollywood actress Vidya Balan, a lady is considered the most beautiful woman, when she showcases her huge innocent smile and does not hesitate in highlighting and appreciating her Indian culture and traditions, after all, an innocent and decent smile can win a million hearts.

We really respect and appreciate Vidya Balan’s true spirit and love towards her culture, traditions, and her country, India.

1. How Can a Black Saree Appear to Be Elegant?

Black clothes are among the most prevalent attire seen in every woman’s closet. This is because black is a universal color, meaning it easily compliments a wide range of hues.

Similarly, a black saree, whether traditional or contemporary, is a must-have. A black saree conveys beauty and elegance.

A black saree is the easiest to mix up with any type of pop-colored blouse. If the saree is plain or simple, alternate between different colored blouses. The black saree looks fantastic with bright colors like pink, red, green, and grey.

2. What Is Vidya Balan Up To These Days?

Vidya also supports humanitarian issues and women’s empowerment. She also broadcasts a radio show and is a member of the Indian Central Board of Film Certification.

3. How Much Does Vidya Balan Charge for Each Film?

The majority of her earnings come from movies and television series, for which she demands a high price. Vidya Balan’s per-film cost is between 6 and 7 crore rupees.

Vidya Balan also earns a lot of money from numerous commercial promotions, sponsorship, and television advertising; she charges more than one crore for every brand endorsement fee.

4. How Did Vidya Balan Begin Her Career?

Vidya began her career as Radhika Mathur in Ekta Kapoor’s popular comedic television program Hum Paanch (1995), which aired on Zee TV before moving on to Bollywood. In 2003, she made her Bengali cinema debut with “Bhalo Theko.” 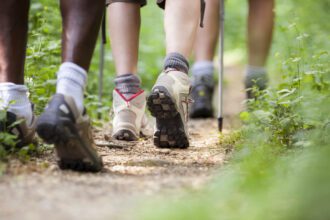