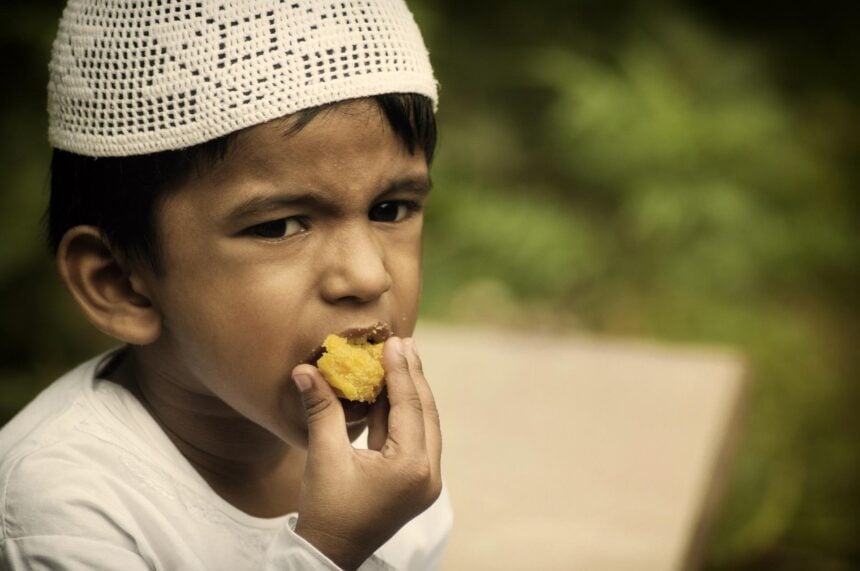 What is halal food and is it really impacting secular society? Let us begin by understanding what actually is halal food.

The word Halal is an Arabic word that denotes what is allowed or what is permitted. A believer Muslim who practices Islamic teachings regulates his life by what is halal and what is haram. Haram refers to things that are prohibited by Islamic law. The enlightened progressives may moan, groan and fuss about how “food has no religion.” Still, their fecund abstractions exist as just a delusion. The actuality of how life is conducted tells us much of the food we consume is theoretically and culturally coded.

There are some theological, religion-rooted principles by which halal food is permissible for Muslims’ consumption. Muslims pay strict attention to whether those principles and standards are followed so that the food can be considered halal. These are some principles:

The consumption of halal meat, according to the Hannover University research team, is more sanitary and healthy. According to scientists, blood is considered a carrier of many harmful bacteria. The consumption of meat-contaminated blood is, therefore, harmful to the health of human beings. It makes humans vulnerable to joint pains and infections.

The halal method of religious slaughter in Islam is a little complex. In this method, the head is not chopped off in the first place, as blood has to drain completely before the head is removed from the animal’s body. The jugular vein of the animals is first cut. This method is more sanitary as the germ-containing blood is kept out, preventing people from diseases. This way of slaughtering animals keeps the heart pumping while all of the blood is drained out completely, making the meat pure and deemed halal.

Another benefit of halal meat is that the meat remains fresh for a longer time due to the absence of blood. The halal methods, therefore, are beneficial in at least two ways described above.

The conflict between halal foods and haram foods is a matter of faith. To couch this conflict in secular terms is obfuscation and false indeed. Imposing food choices based on faith on the people of other religions on non-Muslims should not be legally permissible.

Halal foods are not just a way of slaughtering animals; it is, above everything, a matter of pitching a parallel economy based on certain religious practices. Using the garb of health and hygiene is merely a ploy to deceive the common populace. However, what is happening is the complete violation of the choice and will of non-Muslims.

There are certain food practices of Jews as well as that of Muslims. According to Jewish law, Jews eat only kosher food. Other foods are specifically prohibited for them. Kosher meats are prepared in a very different and specific way, known as shechita. Before consuming kosher meat, Jews are expected to remove all blood. Only a certified person, known as a shochet, should carry out a slaughter. Jews believe that eating kosher food connects them to God as it was the God who made the laws regarding our food habits.

Many luxury and everyday items are forced to comply with the religious notions of halal and non-halal. There are specific guidelines for the preparation of the products of luxury items, failing which it is considered haram and therefore forbidden for Muslims.
The guidelines, if faithfully followed by the company, make the product permissible for a Muslim to be consumed according to Islam. This notion is pernicious as it forces the people of other religions to follow them up without having a say. It should be considered unlawful and harmful to the very concept of secularism.

5. Who Gives A Halal Certificate?

There is no legal authority in India to issue Halal certification to daily-use products. In many Islamic countries, the government has authorized personnel who regulates the process of checking whether products are Halal or haram. As these religious fundamentalist countries have asserted their influence on the companies, the people who export goods comply with these forceful injunctions.

Even Australia, New Zealand, Brazil, and the United States are gradually adopting these measures for financial gains due to the growing demands of religious fundamentalists. They’re remodeling their system, which was until now majorly secular. Still, the rise of uncivil religious fundamentalists has threatened their belief systems, and to save themselves, they are adopting the evasion methods of surrendering to those subversive demands.

In India, religious fundamentalist forces continuously rise that want people to comply with these obsolete observances of halal and haram. The grievances of non-believers against this involuntary practice are regarded as communal snacks of an increasing narrowness of vision and are petty and contemptible. A parallel rise of many self-certified authorities on the issuance of Halal food and Halal products is narrow, bigoted, and intolerant.

The companies which export products such as alcohol, non-alcoholic beverages, vegetables, poultry products, food products, raw materials needed in the process of food processing, products related to pharmacy and health products, traditional herbal products, cosmetic products, leather products are required to get Halal certification, especially in the case they have to be exported to Islamic countries.

Supermarkets selling halal products are also required to get a halal certificate. Items made up of pigs and boars are not given a halal certificate. Meat from these animals is also avoided, especially pork. Avoidance of pork- pigs’ meat is an essential religious observance of Muslims. Many predatory animals like lions and tigers are also haram.

According to Sharia, there are certain animals whose meat is considered Halal for consumption. These animals include the goat, the sheep, the ox, the deer, the reindeer, the gazelle, the antelope, the camel, the rabbit, and the cow. In the Indian subcontinent, the cow’s meat for Muslims has been used for devious purposes of showing down the infidel Hindus as Hindus revere it.

Francis Robinson, in his influential work, “Separatism among Indian Muslims,” mentions how Shaikh-ul- Islam, or the head of Islam in India, Abdul Bari urged Muslims to sacrifice cows without regard for the feeling of Hindus.

The insistence on sacrificing cows because it would hurt the feelings of others and thereby put down the kaafirs is the psychology behind such statements, which is harmful to the harmony between Hindus and Muslims.

So, basically what is halal food? Halal food is a kind of food that originates from theological principles. If one wants to follow it, one should be allowed to do that. However, in a fair world, Halal meat and other meat should be allowed together for everyone. We should build a plural society where food choices are not forced on everyone because of religion. If you liked this article, do read this article- What is Satvik Food? 3 Types of Food That Highly Impacts Our Life on Icytales.

Chandravirdev July 24, 2022
Share this Article
Facebook TwitterEmail Print
What do you think?
Love1
Sad0
Happy0
Sleepy0
Angry0
Dead0
Wink0
Posted by Chandravirdev
Follow:
I am a second year student of history from Delhi University. I am interested in politics, philosophy and literature apart from history.
Leave a comment Leave a comment