Everyone knows about the mysterious tight-lipped smile of Monalisa. Leonardo Da Vinci’s Mona Lisa, also known as La Gioconda, now one of the most popular portraits in the world, was stolen from the Louvre on August 21st, 1911.

Here’s The Man Who Stole the Mona Lisa

It was a Monday, and the place was barely guarded. The people who worked there were the only ones to go in. It wasn’t hard to steal the painting; all one needed was the nerves.

People didn’t even notice that Mona Lisa was gone. Photographers or cleaners often took the paintings away and returned them to their place afterward. No one suspected anything until the next day when they discovered that the photographers had not taken her.

What followed afterward immensely contributed to Mona Lisa’s popularity. Back then, a lot of people didn’t know about her. Those who did were obsessed with her. After she had gone missing, Louvre received flowers; people flocked in to see the space.

The police suspected Pablo Picasso. Playwright Guillaume Apollinaire was arrested and questioned. They had to let him go, and no trace of the Mona Lisa was found for the next two years. After two years, the actual culprit was found- someone no one had expected the thief to be.

Vincenzo Perugia, a petty criminal, committed the theft. He was a house painter and worked at the Louvre for a time. He suffered from lead poisoning and had done things in the past that had to be dealt with by the police. No one had suspected him. Everyone believed that stealing the Mona Lisa had to be the job of a big criminal, not someone as insignificant as Vincenzo.

He kept the painting for two years until November 1913, when he sent a letter to an antique dealer- Alfredo Geri. The letter stated:

“The stolen work of Leonardo da Vinci is in my possession. It seems to belong to Italy since its painter was an Italian.”

He offered to return the painting in exchange for 500 000 lire. Vincenzo signed the letter as Leonardo. Geri agreed, and hence Vincenzo and Mona Lisa took a train to Florence. He stayed at the Tripoli-Italia hotel, where Geri visited to see the painting.

While taking Mona Lisa away for an expert examination, Geri and his friend Poggi were stopped by a hotel clerk who suspected they were stealing a painting from the hotel. And hence, Mona Lisa was found.

Vincenzo faced trial and received a sentence of 1 year and 15 days in jail. He was proven mentally unfit and served only half his sentence.

No one knows if he stole Mona Lisa for nationalism or money. He believed that the French had stolen Italy’s work and wanted to restore it. Also, he was ridiculed by many for his Italian descent. All the pent-up anger had resulted in him committing the crime.

What is Gouache Paint? Top 6 Reasons Why Everyone is Obsessed with It 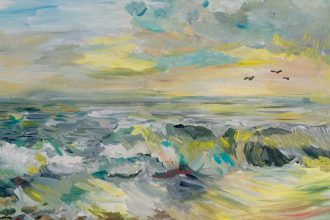 What is Gouache Paint? Top 6 Reasons Why Everyone is Obsessed with It