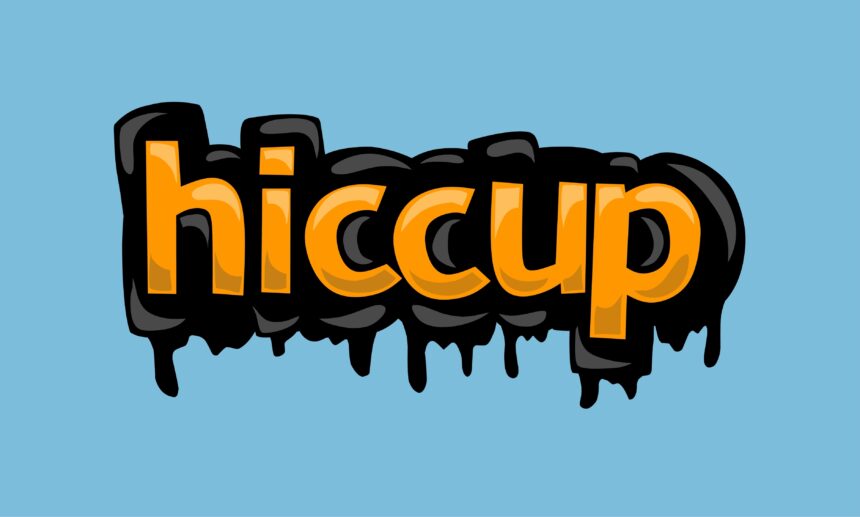 Hiccups are a common occurrence for most people. But why do we get hiccups? Although they are typically brief, they can be uncomfortable and sometimes embarrassing. They may even signal underlying health conditions.

If you’ve got hiccups that last more than 48 hours, they’re referred to as chronic or persistent. But the question remains, why do we get them?

Hiccups are known as “singultus” in Latin. Its root is “singult,” which means to “catch one’s breath while sobbing.” It is essentially a reflex. The intercostal muscles (between the ribs) and diaphragm are used when breathing air.

Hiccups start when your diaphragm – a dome-shaped muscle between your lungs and stomach, contracts suddenly, causing your chest and abdomen to shake. However, your diaphragm can spasm if something irritates it, suddenly causing you to suck air into your throat and voice box.

The short intake causes the throat’s epiglottis, a structure, to slam shut due to this muscular spasm and sucks air into the lungs. The glottis, or the area of the neck that contains the vocal cords, then closes. This causes the “hic” sound that is uncontrollably made when having hiccups, which is the sound of air being released from your lungs.

When you breathe normally, the diaphragm pulls down to allow air to enter your lungs and then relaxes to allow air to return to your lungs and leave through your nose and mouth. Your diaphragm, however, may spasm if something irritates it, causing you to inhale air that strikes your voice box when it enters your throat abruptly.

Depending on how long they last, hiccups are divided into three categories: transitory hiccups, persistent hiccups, and recurring hiccups (episodes of hiccups more lasting than transient and often with frequent repetition). The underlying cause is unknown in the majority of bouts of transitory hiccups.

Hiccups were once thought to signal a child’s upcoming growth spurt, but we now know that is not the case. Many factors can cause hiccups, some physical and others emotional, and some unusual causes.

This is so because the nerve connecting the brain to the diaphragm is where the discomfort occurs. A heavy meal, alcoholic or carbonated beverages, and abrupt excitement are common causes of hiccups.

Hiccups that last fewer than 48 hours are typically brought on by:

Distension occurs in the stomach, which is located below the diaphragm. The diaphragm becomes irritated by this and constricts, just as it does when we breathe in. Often, hiccups happen by eating or drinking too much or too rapidly.

Other digestive-related behaviors that may cause uncomfortable hiccups to include chugging soda, consuming spicy food which causes heartburn or acid reflux, smoking a lot, drinking a lot of alcohol, and hot drinks.

Hiccups can occasionally be brought on by a disruption in the nerve pathways connecting the brain to the muscles between the ribs. Excitation, nervousness, or a sudden change in temperature, such as after a cold shower, can all cause hiccups.

In rare cases, hiccups can last for a while. These nerves can be damaged by anything from a hair contacting your eardrum to a sore throat and, in more severe circumstances, a tumor, goiter, or cyst in the neck.

Metabolic disorders like diabetes or kidney failure, as well as conditions of the central nervous system like encephalitis or meningitis, can trigger long-term hiccups. Drugs can also bring on long-term hiccups like steroids or some tranquilizers.

You may experience hiccups even during some procedures, particularly those that call for anesthesia. Make an appointment with your doctor if you have been hiccupping for more than two days, if they are bothersome enough to prevent you from sleeping, eating, or breathing, or if they give you discomfort.

Also, contact your healthcare provider immediately if you experience abdominal pain, a fever, shortness of breath, vomiting, or hiccups that cause you to cough up blood.

Hiccups are simple to diagnose. Your healthcare physician merely needs to hear the “hic” sound. To determine whether an underlying condition might be the source of your hiccups, your healthcare professional may choose to do a physical examination.

If the physical examination finds anything concerning, they could prescribe testing like imaging exams, endoscopic quizzes, and lab tests.

According to Guinness World Records, Charles Osborne holds the record for the longest hiccup attack. He hiccuped nonstop from 1922 until 1990, a span of 68 years.

Yes- hiccups occur even in babies. Hiccups are one of the most typical activities in the womb and can be seen in fetuses as young as 8 weeks old. Along with older people, newborns hiccup a good amount as well. Provine claims that a fetus may occasionally hiccup each day.

Babies usually aren’t harmed by hiccups. While hiccups can be irritating for adults, they typically make babies feel less anxious. A baby can typically be left alone to stop hiccupping. It is advisable to talk to a doctor if they don’t cease.

Feeding can occasionally cause the diaphragm to spasm, causing hiccups in babies, which typically happen for no apparent reason. Hiccups can occur when they overfeed or swallow too much air.

Air in the stomach may push against the diaphragm and cause spasms. The atmosphere in the baby’s tummy may decrease if feedings are interrupted to allow for burping. The American Academy of Pediatrics advises that bottle-fed infants should be burped every time they eat 2 to 3 ounces.

When breastfeeding a baby, it’s a good idea to alternate between breasts while burping the infant. They can relax by massaging their back and rocking the infant back and forth. This might stop the spasms that lead to hiccups.

In addition to feeding-related reasons, a case of a persistent baby or newborn hiccups can be brought on by something completely unrelated. The cause is typically gastroesophageal reflux, or GER, as it is commonly known. Acidic stomach fluids and partially digested food flow back into the esophagus in babies with gastroesophageal reflux, producing burning and pain.

Since the esophagus travels through the diaphragm, it is susceptible to irritation, which might cause a lot of baby hiccups. Speak to your pediatrician if you experience several of these signs and believe a baby’s or newborn’s hiccups may be caused by gastroesophageal reflux.

Sorry to burst your bubble. You can’t make your hiccups disappear by hanging upside down, or the most popular treatment yet- having a friend scare you. This treatment for stopping hiccups has not been proven effective by science.

But according to some professionals, holding your breath or breathing into a paper bag might work since they both cause your lungs to build up with carbon dioxide, which may relax your diaphragm.

According to Healthline media, there are six physical ways to get rid of your next hiccup: slow breathing exercises, holding your breath for a while, breathing into a paper bag, sitting down and hugging your knees for two minutes, compressing your chest by leaning or bending forward, and performing the Valsalva maneuver- Try to exhale while squeezing your nose and keeping your mouth shut to perform this maneuver.

Here are some natural remedies that you can try if your hiccups don’t stop in a few minutes:

Additionally, you can attempt to eliminate hiccups by using your body’s pressure points to your advantage. The use of pressure points is advised by conventional western medicine even if they seem to be an esoteric discipline. These three methods that address these issues, according to Medical News Today, can be helpful:

Although these techniques may appear odd at first, they have some degree of efficacy that justifies recommending them. There is no surefire way to stop a hiccup. Therefore, there is no assurance that these cures will help, although there’s a small chance the remedies might work. Eating smaller meals and avoiding fizzy drinks and gassy foods may be beneficial if you frequently have severe hiccups.

Although they might be uncomfortable and annoying, hiccups usually don’t cause concern. There may be an underlying problem that requires medical care in some situations, especially if they are recurrent or prolonged hiccups.

Consult your doctor if your hiccup doesn’t go away in 48 hours and is so severe that they keep you from going about your everyday business or seem to be happening more frequently.