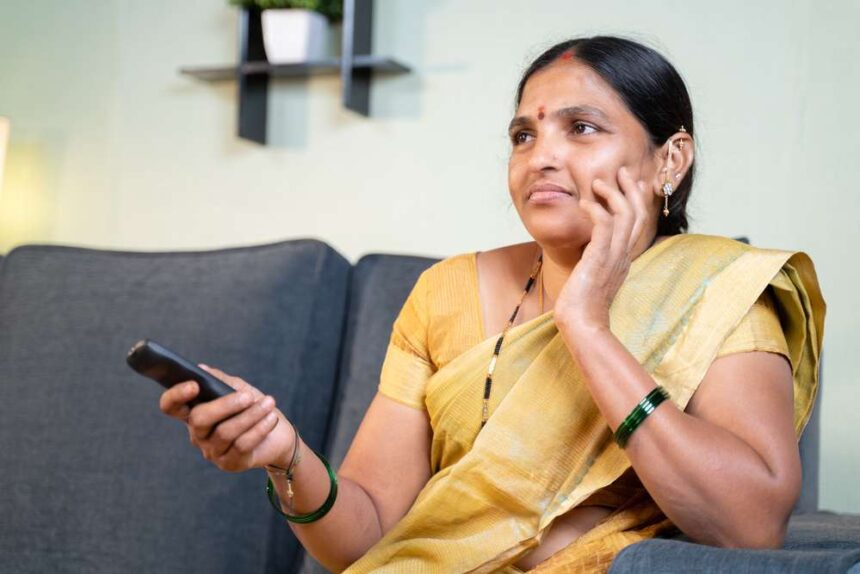 Indian Television and the shows we watch are crazy, and we are crazy about that.

5 Stereotypes of the Indian Family on TV

Following is a list of 5 stereotypes that we find in almost all the shows telecasted on the Indian T.V. every day.

An omnipresent and utterly overwhelming feature of Indian TV – the Saas! This is a lady, anywhere between her late forties to early sixties, who, having finally overcome her own miserable ‘bahu-hood,’ finds herself in the advantageous position of being the owner of a son of marriageable age.

And no, that ‘owner’ was not a typo. This state of existence signals a divine sanction for unleashing her hidden Hitler-ish tendencies upon the helpless soul who enters her household as the newly-wed bride of her son mentioned above. An evil mother-in-law is an essential part of the Indian family on TV.

Be it in the form of ‘taanas’ or rejoinders regarding her DIL’s cooking abilities, her family background, the dowry her parents did or did not pay, or simply her taste in lipstick color; the ‘Saas’ must leave no stone unturned in her holy quest of harassing her ‘Bahu.’

It’s like a college senior determined to rag the first-year students as an act of transferred revenge for his rigorous ragging a few years ago. The ‘Saas’ must have vengeance for the tyrannies meted out by her own ‘Saas,’ ad infinitum. Nothing showcases this vibrant tradition of generational bullying better than the title of one of the most popular shows ever aired on Indian TV – ‘Kyuki Saas Bhi Kabhi Bahu Thi’ – or, ‘The MIL Was Also Once a DIL.’ #TrueStory

Want someone to belittle and scream at to relive your day’s frustrations? Want someone to make you a cup of tea on demand, which you can then throw dramatically across the room, shattering the cup to bits and staining the walls because you didn’t quite like the tinge of adrak in it? Get yourself your very own, brand-new, hymen-sealed, completely unused Bahu!

Apart from impersonating Anastasia Steele’s mid-social-coitus with a middle-aged woman, the Bahu’s job description mainly involves crying. Her wages depend chiefly on how many bucketful of the salty liquid she can produce per hour. The more, the merrier. How can a serial be complete without a bahu in the Indian family on TV?

If she can mix in a bit of simpering, whimpering, and overall imitating a wet – and rather stupid – kitten abandoned in a rainstorm, she can even hope to win the award of the best onscreen Bahu. Ever! It won’t be easy, though. She’s got plenty of whimpering to do!

Ever watched Mean Girls? This woman is what would happen if Regina George had been raised in a traditional Indian household. She’s mean, she’s bitchy, and she seems to find no purpose in life but to make Bhabhi’s life in her matrimonial home a living hell!

Every Indian family on Tv has to have a sister-in-law who loves to interfere with the innocent bahu. Why she derives such acute pleasure from an essentially pointless activity (considering that she will soon be married off and kicked out of the house herself) is anybody’s guess.

Who knows, maybe she’s just having her bit of fun lording it over the hapless submission before her days of simpering submission begin. Whatever her motivations might be, the fact remains that, from pouring salt into delicious pulao and ruining her dinner to overheating mommy dearest’s bathwater to get bhabi into trouble, the nanad does it all! Singlehandedly. All the while getting it on with bhabi’s little bro on the sly. And you say women can’t multitask? This young lady shall shatter all your delusions!

And make no mistake; this man is not the unemployed hobo down the street who still lives in his mother’s basement. Nope. This gentleman is the CEO (or some such) of a multinational company, prosperous enough to finance the billion-dollar jewels perpetually worn by the women of his family.

You would expect him to have a bit of a spine, wouldn’t you? To not get pushed around by every trade-union leader who cried for a pay-raise three days after the last one? Well, you’d be wrong. (Hint: it doesn’t.) An alligator has more of a spine than this dude. The husband is almost like an environment artist in the Indian family on TV.

With the personality of a wet dish-rag and the social relevance, the ‘Pati-Dev’ exists to do: exactly nothing. He is a businessman who never has to do anything, even remotely business-like. So, he sits around the house all day long, memorizing the newspaper until called upon for the holy task of taking his mother’s side in a domestic dispute.

Even this, he does with extreme reluctance and the vocal strength with a cold, presumably because he does love his wife or at least feels some distress at her constant sniffling. Yet, he hesitates from ever taking her side. The Indian family on TV can really get rid of this character and no one would complain. Why? Do you ask? Why?  ‘Sanskar’ of course! What sanskari young lad would take his wife’s side over his mother’s? Scandalous, I tell you! Scandalous!

No, not Karan Johar’s glitzy production house. This is the real deal!

Cultural proselytizers couldn’t have found a better brand ambassador for an Indian family on Tv if they tried! Not an episode goes by without at least two rounds of aarti, one round of kirtan, and at least five boxfuls of a singer being dumped on someone’s head.

You couldn’t move a stool on the sets of one of these shows without holding a yajna for it first! And this is apart from all the mythological allusions; crying, singing, and dancing in front of random hapless murtis; and swearing by the Gita that is part and parcel of the trade.

If God were remembered half as much in real life as He is in TV serials, we’d probably have paradise on earth right now. A paradise of women in ‘ghunghats’ and men in saffron ‘dhotis’ singing bhajans.

What are the Indian family stereotypes on TV that you love or hate the most? Let us know in the comments below!