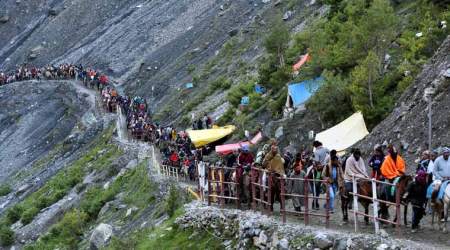 Monday’s attack in Anantnag district on pilgrims returning from the Amarnath shrine is the crossing of a new red line for militants in Kashmir. This year’s Amarnath Yatra was being carried out under heavy security due to warnings of a terrorist attack by the Intelligence agencies.

At 8:20 pm on Monday, the warnings came true as three terrorists attacked an armoured police vehicle. When the police fired back, the terrorists open-fired. A bus carrying pilgrims returning from the Amarnath Yatra became their target. In the firing, seven pilgrims, of whom 5 were from Gujarat and 2 from Maharashtra, were killed and 14 others, including two policemen, were injured. Here’s how the events unfolded:

Security forces suspect the operation was carried out jointly by Lashkar-e-Taiba (LeT) and Hizbul Mujahideen groups. One of the terrorists named Ismail, arrived on a bike first and fired at the bus. However, these groups denied any such charges. “Islam doesn’t allow violence against any faith. We strongly condemn such acts,’’ a LeT statement said.

PM Narendra Modi strongly condemned the attack and offered assistance to the state government. Other top ministers and politicians also voiced their condemnations and prayers.

Speaking to The Indian Express, Hurriyat leader Mirwaiz Umar Farooq said, “It (the attack) has deeply saddened everybody. The people and the leadership of Kashmir strongly condemn this attack on the yatris. For us, the pilgrims are and will always be respected guests.”

Further investigations are being carried out on the matter.