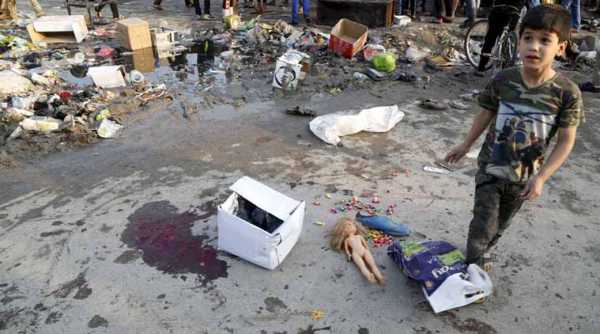 Terrible violence hits Iraq. Baghdad, the capital of Iraq was the spectator to a bomb blast which caused the death of more than 125 people and about 150 people were injured in this blast. According to the police of Iraq this incident was conducted by a so-called Islamic state group. The busy streets of Karrada, a district in Baghdad, witnessed a car bomb explosion on Saturday. The Shia area was busy with late night shoppers, as it is the month of Ramdan.

A second bomb exploded at around midnight in the north of the capital which is predominantly a Shia area.

The bombing in Karrada is the deadliest explosion this year. It became the cause of the loss so many innocent lives. Moreover this blast happened just one week after the Iraqi forces recaptured the city of Falluja from the Islamic State (IS) militants. The police has reported that apart from adults around 15 children and 6 policemen have lost their lives in this explosion. At least 12 more people are missing and are feared to be dead. Even a senior officer has warned them that the death toll may rise further. The Iraqi PM Haider al-Abadi was met with an angry crowd when he was visiting the scene of destruction on Sunday. He later declared three days of national mourning. The US has said that the recent blast has strengthened their resolve to support Iraq in their fight against the IS.

The IS sends a clear message

The destruction and death acts as a clear message from the jihadists of the Islamic State. Their actions clearly state that though they are defeated they know exactly where to hit back on. Their target were the innocent civilians. Killing people in the middle of the road was their retort to the defeat that they suffered in the hands of the Iraqi forces in Falluja. The IS are trying to prove themselves to their supporters and their enemies. As the IS now comes under more strict military pressure, it is very natural to fear that Iraq may face deadlier explosions in the near future.

TAGGED: bomb
Paulomi July 6, 2016
Share this Article
Facebook TwitterEmail Print
What do you think?
Love0
Sad0
Happy0
Sleepy0
Angry0
Dead0
Wink0
Posted by Paulomi
Hello. I am a student of English Literature. Word keep on fascinating me and makes me grow further as a human being. I have always believed that words are powerful enough to bring about a revolution. I am here, just trying contribute, in my own small way to life
Leave a comment Leave a comment