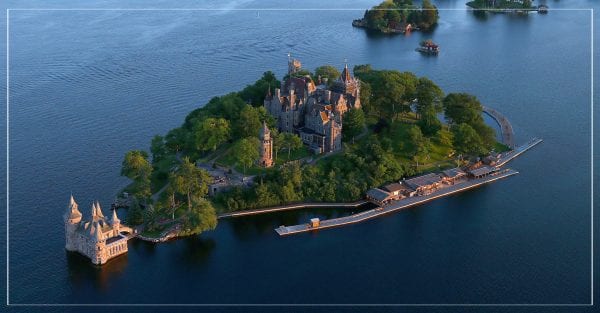 Throughout history, we have seen people expressing their love by constructing monuments—their love stories, romantic or tragic, immortalized in brick and mortar. A lesser-known 20th Century love story is that of George and Louise Boldt’s magnificent Boldt Castle, which is a tucked-away gem with a story that has no fairytale ending.

The breathtaking structure, nestled among the St. Lawrence Rivers’ Thousand Islands, is secluded in its private Island- Heart Island. The Boldt Castle was built by self- made millionaire George Boldt gift his wife on Valentine’s Day. 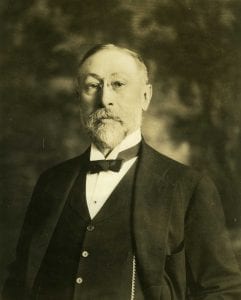 George Charles Boldt was a Prussian immigrant. He was born in a small town in Germany in 1851. Soon, He left everything behind and headed off to pursue his American Dream at the closing years of the Civil War. The young man reached New York and found the job of a dishwasher in the city.

At 25, George landed a job in Philadelphia. His tremendous organizational skills and imagination won the owner of an exclusive club, and he soon became a manager. Little did George knew, he would meet the love of his life here. It must have been love at first sight with Louise Kehrer, the young daughter of his boss. And very soon, they tied the knot. 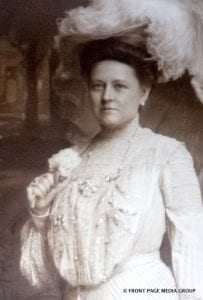 Pictured is a portrait of Louise Boldt.

Rise of George Boldt as a Hotel Magnate

The Boldts soon established Bellevue- Stratford as the premier hotel in Philadelphia. At this moment in time, George meets William Aster, who asks his hand in co-owning and managing the Grand hotel of Waldorf. George soon finds himself caught up in a family feud between William and his cousin John Jacob Aster IV, who built an equally luxurious Astoria Hotel next door.

It was Boldt who made peace between the rival cousins and linked their hotels together, creating the famous Waldorf- Astoria Hotel of New York. George gave enormous attention to his guests and made them feel like royalty.  He stressed impeccable service and elegant cuisine and is credited for inventing room service.

He was the man behind this famous phrase, “The customers are always right.” The Boldt’s hotels mainly served the upper crust, which paved his way to becoming a millionaire.

The Boldts purchased the 5-acre Hart Island for $ 1.00 from late Congressman Elizur Hart. In the summer of 1900, Bold and his family spent their vacation in their cottage at St. Lawrence.

Being a family man who loved his wife dearly, he decides to pursue an ambitious plan to construct a castle for Louise and present it to her on Valentine’s Day, which was also her birthday. He even renames the Island to “Heart Island.” And soon, the family’s old summer cottage was torn down, and the construction of the castle began.

Construction of the Boldt Castle 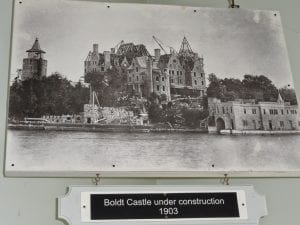 The Boldt Castle was built between 1900 and 1904. It was a physical manifestation of George’s love and devotion to Louise and his children. He wanted to gift the castle to his wife. It was the largest, most technologically advanced and impressive home in the entire Thousand Islands region. 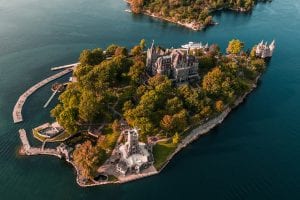 After renaming the Island to Heart Island, Boldt wanted the Island to fit his heart theme, so he hires engineers to reshape the Island with sea walls to resemble a heart even more. 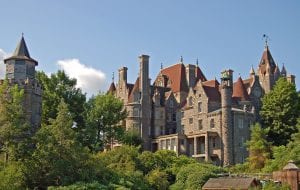 Boldt wanted to design the Castle modeled according to the German Fortress on the Rhine, perhaps to remind him of his home back in Germany. He invested around 2.5 million to create this replica of the Rhineland.

The 60,000 sq. feet Castle was to be six stories tall with 127 rooms. The main house was to be ornamented in the best ‘Gilded Age’ style with tapestries, mosaics, and elaborate furnishings imported from around the world.

Materials like marbles from Italy, fine silks, tapestries of France, and rugs from the Orient were brought to this out-of-the-way secluded Island. George Boldt owned the stone quarries that supplied the stone used for building the castle. The sand, mixed with mortar to hold the stone together, came from Boldt’s sandpits. 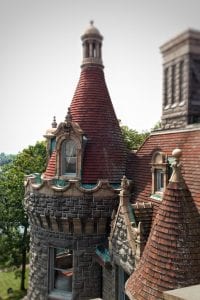 The perfectly cut granite blocks from the Oak Islands needed no alterations when they reached the Heart Island. The walls and ceilings were adorned with hearts. Every inch was designed with Louise in mind. 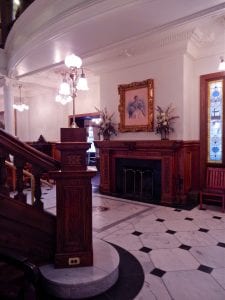 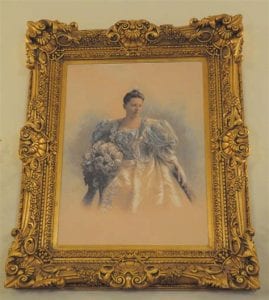 If you walked in into castle today, you would see a large wedding portrait of Louise Boldt on top of a marble fireplace. 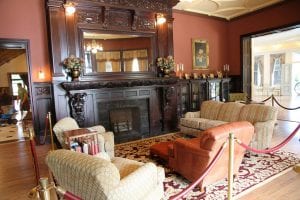 You could see every guest room warmed up with fireplaces and massive chandeliers illuminating the hallways and bathrooms. 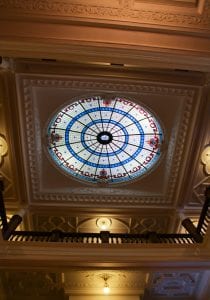 Another thing that’s going to attract your eyes in the castle is the large stained glass in the central hall. It gives you a feeling of being in a cathedral. This large stained-glass dome contains over 6,000 pieces of hand-cut art glass. The smallest piece of glass is no longer than the tip of your pinkie finger, while the largest is hand-sized. 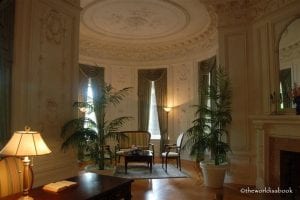 The receptionist room is another room that will catch your admiration in Boldt Castle’s residence. Make sure you see the details in the ornately plastered walls. Entertainment in the Boldt Castle was mainly held during hot summers; therefore, expansive balconies were built.

Although the Castle is left unfinished, it features the ‘Gilded Age’ on the third floor. The Gilded Age was a time when the super-rich built magnificent mansions as an attempt to outshine each other inconspicuous consumption through exotic architectural displays. The architectural style of the Boldt Castle was made according to the Gilded Age’s ‘Châteauesque.’ 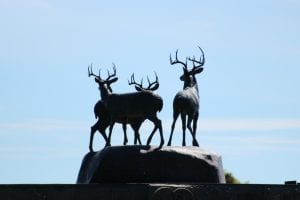 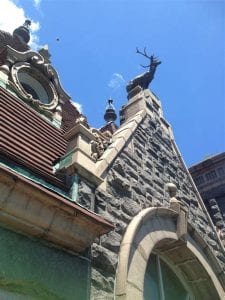 The Male deer or stags which sits high atop the peristyle throughout the Island are known as ‘Harts.’ It represents George Boldt’s European lineage and his family’s coat of arms. He attached great importance to symbolism.

The plans for constructing the majestic castle expanded beyond the court to an entire colony consisting of other additional structures surrounding the Castle like a lover’s embrace. 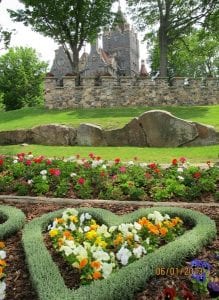 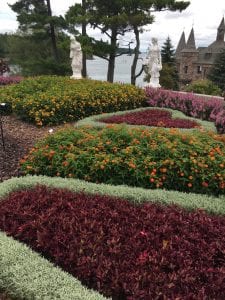 The Italian gardens are geometrically formal, and the flowers are planted in the shape of the heart. They are painted with vibrant colors, and statues lined up the lawn. 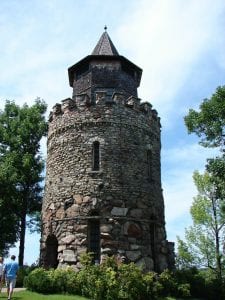 The Dove-Cote in the courtyard next to the Italian Gardens is another romantic spot in the castle. It houses a water tank and doves above it. Today, it serves for outdoor wedding ceremonies allowing brides to make an entrance from the court itself. 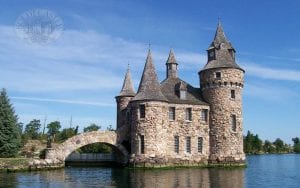 The most iconic part of the island is the powerhouse and the clock tower. They are designed like the medieval towers. Its primary purpose was to generate electricity for the Island. 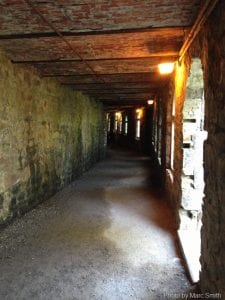 The underground tunnels in Boldt Castle is another feature that attracts our attention. An underground passage led to the servants’ dock on the water’s edge. From the barges, the goods were transported through the tunnels into the storage rooms within the foundations of the Castle. It also housed the water pipes and electrical wirings from the Power House. 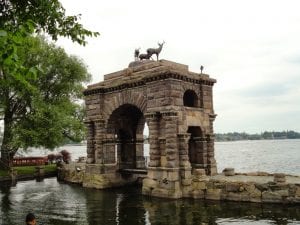 The Arch Bridge, which connects the powerhouse to the Island, has a beautiful backstory. The bridge was patterned after Arch d’ Triumph, and it symbolized Boldt’s triumph over poverty. The bridge gives the guests a grand welcome into the castle after anchoring the deep waters of St. Lawrence. 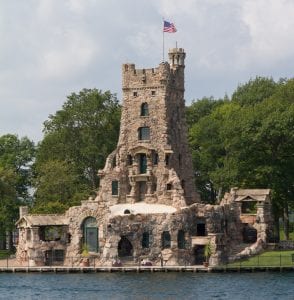 The Alster Tower was named after the defensive towers along the Alster River in Germany. It was mistakenly referred to as the ‘Playhouse.’ But modern research suggests that it was more of ‘Man Cave’ because the building had billiards, a bowling alley and residence upstairs for his business guests.

It combines traditional architecture with modern features of large plate glass windows and extensive verandas. The structure is also known for its fireproof construction.

Unlike the primary residence, which was never completed, this ‘Alster Tower’ was already constructed and was occupied by the Boldt’s during the four years when the Castle was in construction. 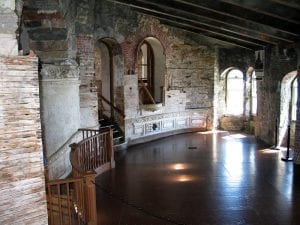 It had a room inside, which was called the Shell room. It got its name from the shell-like shape of the roof and ceiling.

The basement had a bowling alley, and floors above were to have a kitchen, a cafe, a billiard room, bedrooms for guests to stay, and a library. 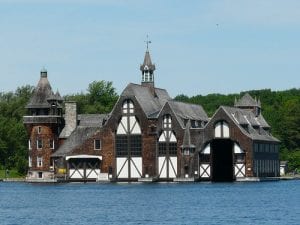 To the north side of the Castle, we see the Yacht House, located on the nearby Wellesley Island. It was built to house the family’s yacht and houseboats.

The house has its shop to build racing launches and living quarters for the crew and maintenance staff. 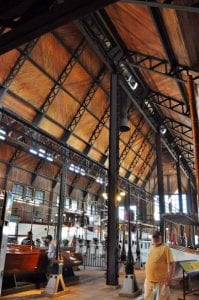 The Yacht House opened for the first time in the summer of 1996. The Boldts Family used the boats that you see on display. And a steam Yatch Kestrel built in 1892 was donated to the Yatch House by Luhrs Marine. It typifies the steam Yatch of George Boldt’s era.

Love stories worth telling always have an air of tragedy around them. The Construction of the Boldt Castle continued for four years and was scheduled to be completed on Boldt’s anniversary.

A month away from the Grand Valentine’s Day gift, in January 1904, a tragedy struck the Boldt Castle. George telegraphed the island to immediately ceased the construction. Louise had died suddenly. It was believed that she had been battling tuberculosis.

The construction of Boldt Castle became a distant dream for George as the sudden death of his wife left him devastated and inconsolable. He walked away from Heart Island, never to return. The thought of going back would have brought painful memories back.

Eventually, George sold the castle off to Edward Noble in 1920, although he wanted nothing to do with it. For 73 years, the Boldt Castle was left neglected and left exposed to the hot summer and harsh winters, which destroyed the walls and interiors. The Castle was also subject to constant vandals.

With Boldt Castle being left unattended for years, it was left at the mercy of the harsh northern weather. Vandalism also posed a significant threat to the Castle. The walls and roofs were scribbled with signatures everywhere.

When the Boldt Castle was in danger of disappearing forever, the Thousand Islands Bridge Authority came forward to save the monument of love. It was a non-profit organization whose aim was to preserve the Castle for future generations to come.

They acquired the property by gift from the Edward John Noble Foundation in 1977, and it was decided that all revenues obtained from the castle would be applied for it’s restoration. So even today, the structures in the ‘Heart Island’ is a work in progress.

The restoration is carried out according to the detailed plans of George Boldt, which were found. Since 1977, several million dollars have been spent on restoring the dream castle of George.

Three hundred forty-eight windows had been repaired, and the Yacht House across the river has been fully preserved. The Towers in the Castle remains a significant work in progress. Slowly, the Boldt Castle is being brought back to life.

Heart Island has been hosting some of the most spectacular fireworks display over the years. But on some fateful occasions, the firework display ended up in the destruction of the buildings on the Island. So the restoration and construction continues. Staff workers work continuously on both the upkeep and restoration of all the facilities in the Island.

How to Reach Boldt Castle of the Heart Island?

Although the six-story Boldt Castle never achieved it’s intended glory during the time of George Boldt, today, the Island is open to visitors to experience the testament of love. The Boldt Castle is opened through May to October for visitors.

The only way to visit the Boldt Castle, which lies hidden in the heart of the 1000 Islands, is by boat. Private boats, as well as tour boats, are available.

You can either take a cruise from Canada or the United States. As you travel to the Heart Island, you will sail past many of the 1,864 Islands.

Feed your eyes with this virtual tour of the Boldt Castle, which might ignite your spirit of wanderlust.

Go and experience this masterpiece and breathe in the aura of a love story of two people who made it possible for the Castle to come to life.

If you want to learn more, you can click here to visit the official website of Bold Castle.