In English, the word HARSH means HAPPINESS. But this is an irony for the teen, Harsh Damani, who gave up all worldly pleasures to lead a life of simplicity and religion.

What does Diksha mean? In the context of Jainism, Diksha means renouncing worldly pleasures and leading the life of a saint. One leaves their family and lives with the saints. They practice simple living by wearing white clothes and spending their entire day reading about spirituality. Then at the final stage, they become orators of Jainism and speak about it to the commoner. 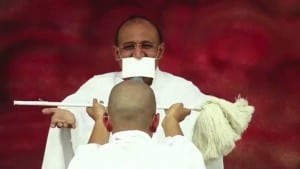 In Jainism, the practice of giving Diksha begins in childhood. Once a person takes Diksha, they have to walk barefoot, eat simple food that is offered and not chosen, sleep on the floor and shave off their head. On the days of fast, these saints consume only boiled water.

I live in a town called Rajkot, where the society follows traditional values and norms, and these rituals are still in practice. Any responsible parent would see it as their moral duty to educate their child. But lack of proper education got a young child, Harsh Damani, into spirituality, and he was wavered from leading a normal peaceful life.

Harsh Damani, who is just 13 years old, recently took the dreadful decision of practicing Diksha. Fifty thousand Jains enjoyed this ceremony, but not one single soul tried to stop this ceremony. Since his childhood, he was inclined towards spiritualism and was interested in reading religious scriptures. At the age of 10, he decided to reside with the saints to lead a simple life. He was being prepared to renounce worldly pleasures. His uncle took him on a world tour to show him the reality that persisted and how there was immense joy in leading a life of luxury. But his strong determination could not change his decision to lead the life of the saint. This sad day was considered a day of celebration for people who seemed to enjoy his worldly renouncement.

As KHALIL GIBRAN puts it:

Who can separate his faith from his actions or his belief from his occupations? Who can spread his hours before saying this for god and this for myself, this for my soul, and this other for my body? Your daily life is your temple and your religion. And if you would know God, be not, therefore, a solver of riddles. Rather look about you, and you shall see Him playing with your children. And look into space; you shall see him walking in the cold. Outstretching his arms in the lightning and descending in the rain. You shall see him smiling in flowers, then rising and waving his hand in trees.

According to me, God is omnipresent, and he is watching us every moment. My understanding of religion is that it is all about leading a peaceful life while helping fellow human beings and showing compassion and care towards them. Trying to bridge the gap between the rich and the poor and uplift the society as a whole and bring unity amongst us.

In this respect, I would appeal to this country’s youth to take the initiative to bring an end to this barbarous act. I feel that there should be a law passed by the Government that should state that no religion can allow a person to become a monk before the age of 18. At this age, a person is mature enough to make their own decisions.

Let us all spread the true meaning of religion and save many more such Harsh Damani, from renouncing worldly pleasures without knowing it all.