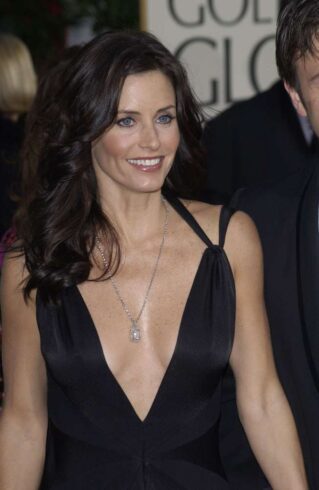 How did Courtney Cox Become Famous?

Yes, it is Courtney Cox, who became famous as Monica Geller from the F.R.I.E.N.D.S. sitcom. But do you know how she got there and landed a worldwide known and adored role? So, here I peep into Courtney Cox’s life and enlighten you about how did, the American actress, Courtney Cox become famous.

When it comes to her early life, Courteney Cox was born on June 15, 1964, in Birmingham, Alabama, as the youngest of four children to Courteney Cox and Richard Lewis Cox. Cox moved to live with her mother and stepfather Hunter Copeland after her parents divorced in 1974.

She was an enthusiastic swimmer and tennis player as a youngster. She attended Mount Vernon College for a year before dropping out to pursue a modeling career in New York City.

Courtney Cox was not very new to Hollywood when she starred in the F.R.I.E.N.D.S. sitcom in 1994. She had achieved her big break ten years before it, in 1984. Bruce Springsteen, a very well-known singer and musician from America, was to launch a new MTV single.

They had decided upon getting a fresh unknown face for the video. It was “Dancing in the Dark,” which was to be directed by Brian De Palma. It was the role of an adoring fan at the concert of Bruce Springsteen. In the last few seconds, the fan gets called by him on the stage to dance along with him.

If you love Courtney Cox, do check out her debut video of Dancing in the Dark. You would love how fresh and beautiful she looks with an adorable haircut!

Courtney Cox, at that time, had just started her career and was completely unseen and unknown. Cox got starred as the fan woman in the crowd. The Dancing in the Dark single of Bruce, at that time, had become his most significant single hit in the U.S. and notched the number 2 rank.

The fandom of this single in the U.S. made Courteney Cox noticeable to the Hollywood Producers, and she started coming into the light of fame slowly and gradually.

The video had been #iconic. It is even believed that the dance of Bruce and Courtney Cox in the video inspired and gave birth to a step called ‘The Carlton‘.

After the 1984 debut, Courtney Cox starred in a science fiction series called ‘Misfits of Science’ (October 1985 to May 1986). It did not air for long and lasted just one season of 16 episodes.

It had aired on N.B.C., making her more watched in U.S. households. She played a role named Gloria Dinallo, who is a telekinetic teen. It was not much of a remarkable role but laid the cornerstone for the career of Courtney Cox.

She bagged a role as Lauren Miller in Family Ties, a sitcom, during Season 6 and Season 7. ‘Family Ties’ was a well-known series. It reflected the United States’ move from liberalism to conservatism. The series had won many awards for Michael J. Fox, the lead actor of the series. And Courtney had played the role of Michael Fox’s girlfriend.

The series even earned an award in 1987 for ‘Outstanding Writing in Comedy Series and Outstanding Technical Direction.’ The success of this series had laid a strong base for Courtney Cox for a comedy sitcom.

Courtney had even landed a few roles in films like ‘Masters of the Universe‘ in 1987. It was a fantasy science fiction film. Another film in which Courtney Cox starred was ‘Cocoon: the return in 1988′. It is based on science fiction but is a comedy-drama.

Before making her debut in F.R.I.E.N.D.S, she had done quite a few other roles.

Courtney had become quite famous by the year 1994. She had auditioned for the role of Rachel Green, a character in the F.R.I.E.N.D.S. sitcom. She then starred as Monica Geller, a clean freak! F.R.I.E.N.D.S. became the most loved sitcom.

The sitcom’s success made it run for ten years and 236 episodes.

Courtney Cox appeared as Monica Geller in each episode, being one of the main cast members. This became her most famous role of all time. Her chemistry with her sitcom Friends co-stars Chandler Bing, and all enjoyed Matthew Perry. The girl gang of Rachel (Jennifer Aniston), Phoebe (Lisa Kudrow), and Monica rocked the whole show.

Courtney became famous as Monica, not only in the U.S. but also in the entire world. Even today, her iconic role in the iconic series is alive, despite the last episode being aired 15 years ago.

Click here to know more about Courtney Cox and her role as Monica Geller!

2005 Guinness Book of World Records says that Courtney Cox, at that time, became the highest-paid T.V. actress. For the last two seasons of F.R.I.E.N.D.S., the actress and the other cast of the series used to be paid USD 1 Million per episode.

4. Marriage and How It Changed Her Career Path

When it comes to her personal life, in 1999, Courtney Cox married an American actor, director, fashion designer, and even a professional wrestler, David Arquette. Both Courteney Cox Arquette and actor David Arquette were interested in the direction and production. They started a production company in 2004 known as Coquette Productions based in Los Angeles, California.

Together under the banner of this production, they produced, directed, and acted in many films and T.V. series. The marriage with David evolved Courtney as a producer and director.

However, the pair separated and got divorced in 2013. But they maintain a healthy friendship being parents of their daughter Coco Arquette. They have also continued with their business relationship as the founders of the Coquette productions, running it successfully till date.

None of the Hollywood makers and directors were unaware of the love and fame received by the character Monica Geller portrayed by Courtney Cox. It effectively made her famous and reflected her as a great actor.

She was the first choice of Marc Cherry for a role in Desperate Housewives Series, but she could not accept the role due to her pregnancy. Cox revealed having postpartum depression six months after giving birth to her kid. Then, she had fixed a deal with A.B.C. Studios to star in her own series.

6. A Completely Different Role that Gave Her Fame

A very well-known horror mystery series, Scream, inspired by an American Serial Killer, Danny Harold Rolling, was also known as Gainesville Ripper, for murdering five students in Gainesville. There is a character in Scream who is portrayed as an ambitious journalist and writer. This character is called Gale Weathers, who was portrayed as an antagonist in the beginning. The producers did not even consider Courtney Cox for the Scream, released in 1996.

The producers thought that the history of roles played by Courtney Cox is very light, soft, and kind, which was suitable to some extent. But our loved Monica, having the itch to please everyone, lobbied very hard to land that role. She wanted to play the bitch character of Gale Weathers to experiment with her acting skills and let the audience see her different side.

At last, she got the role of Gale Weathers in Scream. She starred in all three sequels of the show, namely Scream 2, Scream 3 and Scream 4. This role of hers was successful enough to change the vision of the public. They got to see her as a very versatile actor.

The role of Cox in the Scream as Gale Weathers gave her 3 Award Nominations. It also won her the Teen Choice Award. So, with this, she became even more renowned.

7. A Producer and An Actor

For the deal signed with A.B.C. studios, a sitcom called Cougar Town was produced. She was one of the main characters and also a part of the executive producers’ team. This was possible as Coquette Production was on the producers’ panel along with the A.B.C. studios.

The role of Courtney Cox in this sitcom was Jules Cobb. It is depicted as a self-centered and very demanding character. This role was strong enough to give her a Golden Globe Nomination, adding to her fame and adding more awards to her galore. The sitcom aired for six years showing six seasons having 102 episodes.

The list of the awards and nominations would be very long for Courtney Cox but to name a few,

We can quickly figure out the reasons behind Courtney Cox’s becoming famous. A music video led her to many other opportunities. She not only seized them but also lived up to them.

She proved to the world how much worthy of an actress she is! Among the six prominent people from the cast of F.R.I.E.N.D.S., she is the second-highest in terms of followers on Instagram, possessing 9.7 million Followers.

Going through her Instagram, you would still find that charm in her and see her adorned in glee with her two dogs and daughter Coco. She has been in a relationship with Johnny McDaid, a musician, singer, and songwriter, since 2013.

Her brilliant career started with a music video. She’s also seen playing the keyboard like a pro though being a learner. Isn’t she connected to music?

About her relationship with Johnny McDaid, the band member of Snow Patrol, you can watch the fun interview of Courtney Cox on the Ellen Show. And now that a Friends reunion is finally happening, we can see more of her too!

So, now I knowwwww, how much we did not know about our famous Courtney Cox other than her epic Monica Geller which rules our minds. But I hope this post will have been helpful enough to tell you how famous a star she is!