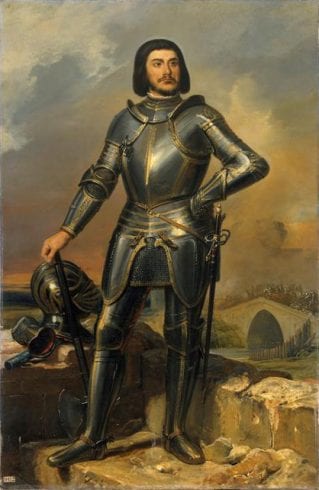 Gilles de Montmorency-Laval, Baron of Rais, was a French aristocrat and war-hero of the early 15th century. Remarkably, he was a companion-in-arms of St. Joan of Arc and had fought alongside her, both in Paris as well as during the legendary Siege of Orléans.

He was born as heir to the prosperous baronetcy of Rais and inherited property from both his Mother’s and Father’s side of the family. Raised by his maternal grandfather after his parents’ death, Gilles was married as a teenager to one of the richest heiresses of the realm, further augmenting his wealth and status. He distinguished himself at a young age in the 100 Years’ Wars against the British forces, fighting bravely in the army of the Joan of Arc, and was one of the campaign’s most successful generals. Furthermore, he ingratiated himself with the Duke of Brittany by supporting his family’s right to the Dukedom, thus further securing his position of power and prestige.

However, after Joan of Arc was burnt at stake for witchcraft, de Rais left his position in the army and returned home to live a life of relative comfort. This was when his downfall began.

Bereft of the excitement and glory of the battlefield, yet still craving the action and violence of war, de Rais’ downward spiral began when he started spending his money prodigiously in frivolous pursuits. He kept a more lavish court than the French King himself, with an army of servants, pages, and entertainers. He single-handedly financed a hugely extravagant theatrical spectacle at the Church he had founded, of which he was also the writer. This enterprise nearly bankrupted him, compelling him to sell almost all of his castles and inherited property. As a public sign of his disapproval of de Rais’ wasteful ways, his grandfather died, leaving his sword and breastplate to Gilles’ younger brother René.

Having prodigiously spent almost all of his fortune and estranged his family, de Rais was driven into debt and ruin. In this state of desperation, he sought to re-establish his former status and wealth through occult means. He acquired into his service an occultist named Francois Prelati, who claimed that he could summon a demon named Barron who could fulfill all of the nobleman’s wishes and make him rich once more.

De Rais went so far as to sign elaborate contracts with the demon, offering it gold and jewels in return for its services. Intricate rituals were held for the summoning, but the only thing de Rais refused to offer the Devil was his soul. Counter-intuitively, despite his depravity and corruption, the General remained a devout Christian, wholeheartedly believing that he would ascend to Heaven despite his heinous crimes.

When repeated attempts to summon the demon had failed, Prelati told a frustrated de Rais that the demon desired the body parts of young children; and only after such offerings were made would it be satisfied and grant their wishes. Hereafter began de Rais’ reign of terror.
Unaccompanied children in the surrounding areas of de Rais’ castle began disappearing mysteriously. Local peasants complained that many of their children, who had entered the castle to beg, never returned.

De Rais employed two of his most trusted body-servants to hunt for and kidnap unaccompanied peasant children in the surrounding areas. These children (mostly boys) were then brought to the General’s castle, where they were dressed in clothes finer than they had ever seen and then fed a delicious meal at dinner. Following this, the children were taken to de Rais’ room upstairs, where the nobleman, along with his coterie, would be waiting for them.

What followed then is a macabre tale of heartless torture, rape, and murder of young boys and girls. According to his body servants’ testimony, de Rais would hang the children up with ropes and hooks to prevent them from screaming. He would then ejaculate on their bodies while simultaneously causing grievous injuries to the children through ruthless beatings and torture; apparently, the fear of his victims excited him. The children would then be raped and dismembered, either with a saw or a sword named Braquemard, which was always kept at hand at the time of the murders. The severed body-parts of the children were then sent to the demon Barron as an offering.

It is estimated that Gilles de Rais raped and murdered at least 150 young children in this manner. His atrocities finally came to light in the year 1440, when after a dispute with the Bishop of Nantes, he had the clergyman kidnapped. This led to an ecclesiastical investigation against him, which finally caused the discovery of the burnt or buried bodies of the children he had killed over the years. Threatened with excommunication and torture, de Rais confessed to his crimes and was sentenced to hanging and burning at stake in a public execution, as was the times’ custom.

The history of Gilles de Rais was the inspiration for the character of Bluebeard in the 1697 fairytale by Charles Perrault. Almost 600 years after his death, Gilles de Rais’ legend survives as the oldest known serial killer in the world’s history and one of the most brutal. It is the story of the rise and fall of a twisted mind, with potential both for great heroism as well as great evil. It is the story of the slow descent of a man from nobility into depravity and crime.