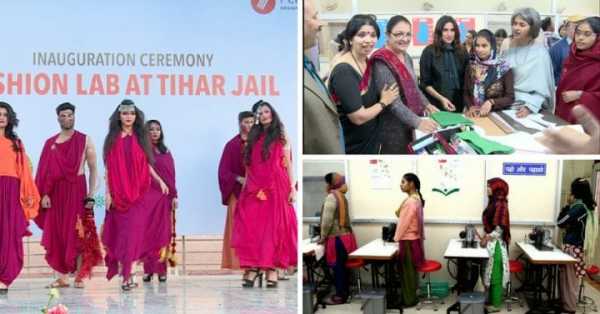 A young inmate at Tihar jail saw her dream come true as she was introduced on stage as a ‘fashion designer’. Salma is one of the 18 women inmates who graduated from the Tihar Fashion Laboratory at its first convocation ceremony held in Janakpuri’s Dilli Haat.

The project which is initiated by Pearl Academy and the Delhi Prisons saw inmates and models showcase the garments designed by the graduates. The laboratory intends to create avenues for self-employment and polish entrepreneurship skills among the women inmates. In the beginning, 24 inmates joined the course, but 6 of them discontinued as they were released from the prison. The lab provides modern facilities with equipment of industrial standards, including pattern tables and sewing machines.

The 18 women who completed the course, were awarded certificates by Sudhir Yadav, DG, Tihar Jail and professor Nandita Abraham, CEO, Pearl Academy. Kailash Gehlot, the Law Miniter of Delhi, was the Chief Minister of the event. Other Notable dignitaries like Swati Maliwal, chairperson of Delhi Commission for Women and Vinal Kumar Saxena, Chairperson of Khadi and Village Industries Commission. These initiatives were reformative for the inmates and changes in their behavior was well evident. Inmates who were depressed and unhappy could be seen as interacting and participating happily. The fashion show was held in Janakpuri.