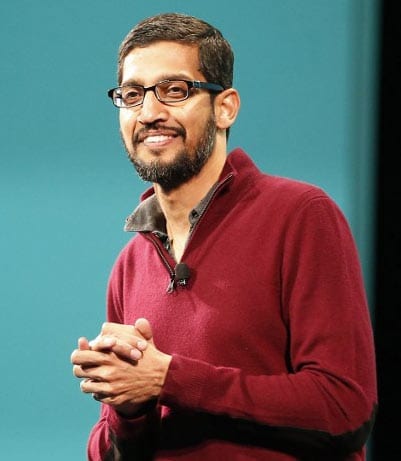 The “Pride of America Award“ is an annual award of the Carnegie Corporation. This award is meant for immigrants and this year will honor 42 nationals who represent 30 different countries. “These accomplished Americans are Immigrants like our forefathers, who founded this nation of nations,” said Vartan Gregorian, who is the President of Carnegie Corporation of  New York where this event was held on the 30th of June.

This year there were 4 Indians who received this honor. Sundar Pichai, Hari Sreenivasan, Vikram Malhotra and Bharati Mukherjee were awarded with the “Immigrants: Pride of America” award last night.

Sundar Pichai, who is of Indian origin and belonging to the state of Tamil Nadu, is a citizen of America. He studied at IIT Kharagpur followed by Stanford University and finally completed his education from the University of Pennsylvania. He is the Chief Executive Officer (CEO) of Google Inc. He is known as one of the most Powerful ceos of the world. Hari Sreenivasan is an American journalist of Indian origin from the state of Maharashtra. He did his bachelors from the University of Puget Sound and is now working as PBS Newshour weekend’s host. The third Indian to be receiving this award is Vikram Malhotra. Vikram is the chairman of the Americas, McKinsey, and Company whereas the forth receiver of this award is Bharati Mukherjee, who is a National Book Critics Circle Award- Winning author. This award is given out to immigrants of different countries of origin, a wide range of personal immigration stories and inspiring professional accomplishments. These people are the representatives of the millions of immigrants who come to the United States every year in search of work, education and economic opportunities.