The latest in the line of bizarre, slightly funny and mildly horrifying events to unfold in 2016 are the incident of the Congress Twitter hacks – two successive hackings of the Twitter accounts of Rahul Gandhi and the Indian National Congress by yet unidentified agents.

The first one to be hacked was Rahul Gandhi’s official, verified Twitter handle, from which the hackers posted a wide range of abuses directed at him and his family. 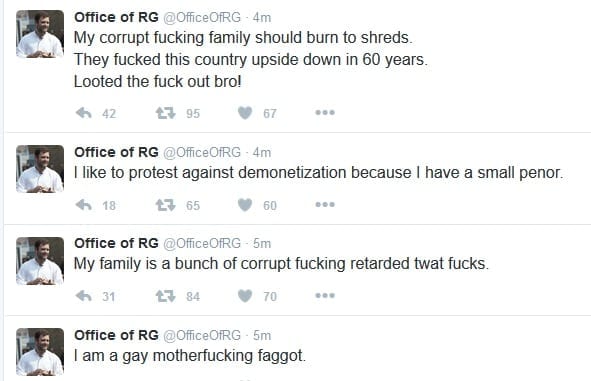 The abuses posted were rife with expletives. Also posted were memes ridiculing the politician and those in alliance with the political party to which he belongs. 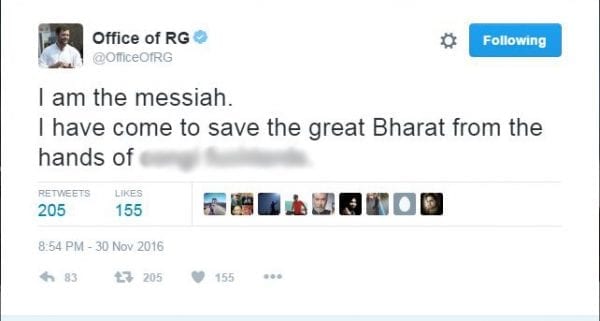 Even the name of the account as it originally appears, i.e, Office of RG was edited into an offensive parodied version of the same.

After the Indian National Congress filed a complaint with the cyber cell in Delhi, their official Twitter account was the next in line to be attacked. 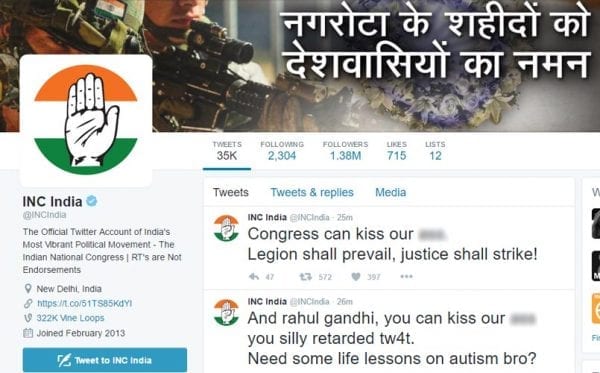 While the tone was as mocking and hostile as before, this time the hackers did not seek to assume the identity of the party hacked, but rather talked of a “we”, indicating an unified force. 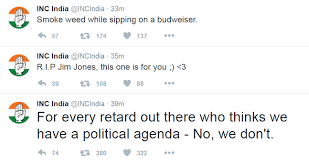 The hackers also talked about Congress e-mails in their possession that, if exposed, would be lethal to the reputation of the political party in question.

Reactions to the Congress Twitter Hacks were mixed. While some cheered, joining in on the mocking, others stood their ground in declaring their sympathies with Rahul Gandhi and the Congress. Yet others expressed their concern for the state of internet security in the country and the poor light the incident casts the same in. 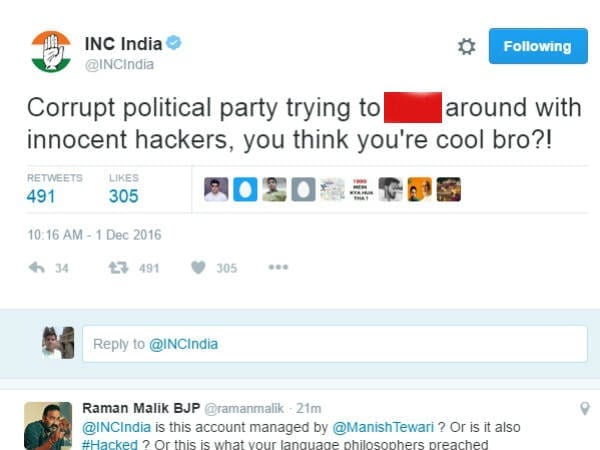 The Internet was, of course, agog with various versions of and takes on the Congress Twitter Hacks as soon as it occurred. With it came speculations as to who the culprit was.

Some placed the blame on the ruling party. This was apparently the most obvious conjecture, seeing how the hacker had targeted the party’s critics of policies enacted by the current government, such as the demonetization drive. This thesis however, seems to attribute to them too irresponsible a move on their part. Others were of the view that the blame was on the Gandhis and their supporters themselves, to detract attention from the subject of demonetization and cast the ruling party in an unfair light. 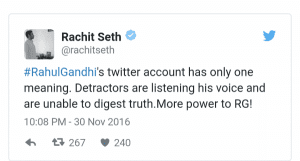 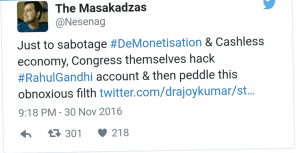 The netizens of Twitter India were quick to use Congress Twitter hacks as further excuse and impetus to mock the targeted parties. Others took the issue more seriously. The incident was co-opted into almost every shade of political thought among Indian netizens to cast the player in the political field of their choice in a good light.

While humorous takes on the incident speculated on increasingly absurd possibilities of the username used to hack into the Twitter accounts- chotabheem or pogo, carrying forth the joke of a frequently infantilised Rahul Gandhi, or the possibility of the tweets being the primary users only in an inebriated state.

Experts on the issue stated, as per India Today reports, that if the hackers have used the deep web or proxy servers, their identities are next to impossible to locate. The sorry state of cyber security, the incident throws light upon, is indeed, worrying.

However, this is not the only worrying aspect of the incident. The frequent homophobic slurs posted by the hackers are insensitive and ignorant, but unsurprising. Sadly enough, the normalization of homophobia and the use of the homosexual identity as an insult is all too common in India. While some spoke up against the offensive nature of the abuses to the LGBTQIA community, a vast majority seemed to overlook the issue or be complicit in it.

The hackers, in their posts on the Indian National Congress, take on a rather serious tone, a mock revolutionary one, seeing how they are poised to ruin a party who is no longer in power in the first place.

Whether the hackings were revolutionary or reactionary in themselves has been up for debate. What primarily strikes one, in the leap from calling Rahul Gandhi a “faggot” to declaring one’s capacity to ruin a political party, is the inherent absurdity of the situation. Further details about the Congress Twitter Hacks remain to be uncovered. It remains, in the meanwhile, a source, alternatively for concern or for hilarity.