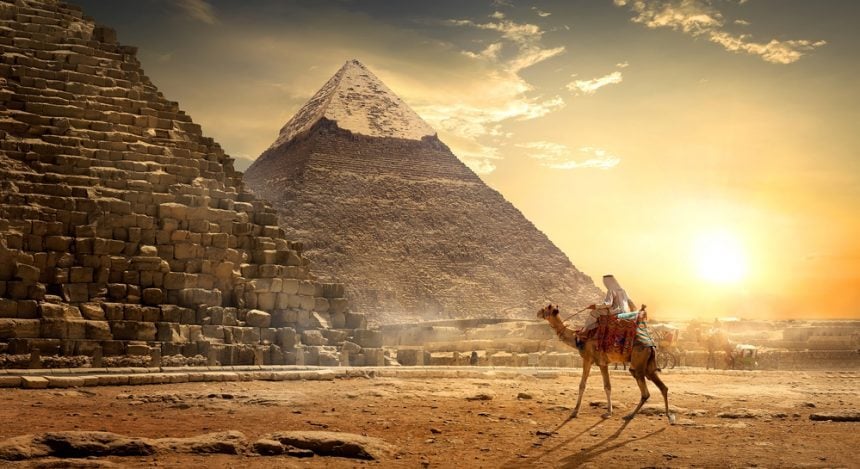 While we all know about the world-famous pyramids in Egypt, little has been discovered about them. To date, they are an enigma, posing new and more complex questions every day.

Scientists, historians, archaeologists, and Egyptologists continuously find themselves trying to uncover the mysteries behind their structure, purpose, built, composition, and position. While they are still one of the ancient wonders of the world, their history has been a puzzle for thousands of years.

We do have a lot more to discover, but there have already been some ground-breaking discoveries made by experts. There may not be written records of those times, but there are still many images, prints, rocks, burial chambers, tombs, and tunnels that continue to tell us more about the builders of Egyptians pyramids.

One day, maybe we will have all the answers, but for now, let’s learn about what we already know. Here are the top 7 facts about Egyptian pyramids that will surprise you:

1. The Great Pyramid Maintains a Constant Temperature of 68 Fahrenheit

The Great Pyramid of Giza, popularly known as the Pyramid of Khufu, is built on the Giza Plateau. This Pyramid is one of the seven wonders of the ancient world.

This 6 million tonnes structure finished contrition at around 2560 BC. Despite being built in times when there were no machines or technology, Egypt’s pyramids have made scientific advancements that were much ahead of their times. Interestingly, the temperature is one such stride.

The temperature of the Great Pyramid remains constant at all times, at 68 Fahrenheit or 20 degrees Celsius.

This temperature is the same as the earth’s average internal temperature. Even in extreme conditions around, whether hot or cold, the temperature inside the pyramid will remain comfortable.

This was the way ancient Egyptians believed in air-conditioning their structures for the comfort of their pharaohs. The reason for this constant temperature is that the king’s chambers are attached to air shafts, which function in a similar way the air-ventilators we have today do.

2. Egyptians Built the Pyramids in A Way that It Always Shone

After the completion of building the Egyptian pyramids, they covered it with a thick layer of tens of thousands of casing pyramid stones, which were slanted, thick slabs of white polished limestone.

At the time, this outer casing layer served the purpose of giving a luminous finish to the early pyramids, the sacred place where tombs of pharaohs were kept.

They reflected the sunlight like glass, and earlier accounts sang praises of this diamond-like finish of the pyramids. Only such highly esteemed pyramids, such as those built for pharaoh Khufu, were covered with this outer casing, and not smaller pyramids.

Researchers marveled at how early Egyptians were able to fix these pieces of stone themselves, and with such finesse. It was found that the reason for that was mortar, a type of cement that provided a level base for the casing stones to be fixed.

However, today those casing stones are, for the most part, gone. This can be attributed to several reasons. Firstly, a high-intensity earthquake in 1303 AD caused the outer huge stones to fall out.

Later, many were removed deliberately to fix in other constructions in Cairo. Because of their excessive falling out, casing stones created a heap of rubble around the pyramids. Thus, they were removed and taken away. Click here to read more about this.

3. Pyramids Were Built by Paid Laborers, Not Slaves

There is a large spread myth about the builders of the Egyptian pyramids, according to which slaves built the Great Pyramids. However, there is no truth to this, and it has been proven wrong time and again.

This myth about pyramid builders was spread by Herodotus, who was a Greek historian. He went to Egypt in the 5th century BC and accounted for his visit. One of these accounts mentions that slaves built the Great Pyramids.

But after thorough research by archaeologists and Egyptologists, it has been found that the Egyptian pyramid builders were paid laborers who had been recruited for their service.

They were, in fact, poor people who worked out of loyalty to their pharaohs. Since they were well-respected, they were also buried in tombs near the pyramids.

According to archaeologist Zahi Hawass, they would never have been given such honor had they been slaves. He claimed that they ate meat as well.

Approximately 10,000 workers are estimated to have worked on the pyramids, a figure which was guessed completely wrongly by Herodotus.

The laborers, though were not slaves, were found with diseases in their bones and poor health when their skeletons were discovered. Hawass credits that the amount of work they did for 30 years; it took a toll on their health.

4. The Pyramids Form an Alignment with Stars

Many theories and research papers suggest that the alignment of the Great Pyramids match with the Orion’s Belt Constellation.

More cohesive studies prove that when the Great Sphinx, other surrounding pyramids on the Giza Plateau and the Nile river are included, too, they complete the entire picture of the constellation of Orion and Leo.

Interestingly, Osiris, associated with the Orion’s Belt, was the Egyptian God of the afterlife, death, and resurrection. These elements relate to the fact that the pyramids may have been built to preserve tombs of pharaohs.

More research suggests that the margin of error in this measurement is very less, and the ancient Egyptians building pyramids may have used astronomy as the guiding force for the constriction of the pyramids.

However, many astrologists have dismissed this correlation between astronomy and constructions of pyramids, citing miscalculation and wrong mapping.

As a result, archaeologists who worked on this correlation theory have been blamed for following pseudo-archaeology. Click here to read more.

5. We Still Don’t Know What Materials Were Used to Build the Pyramids

The Great Pyramids of Egypt stands tall and proud even today after being built more than 4500 years ago. They have stood unscathed in the face of earthquakes, storms, rains, loots, and even attempts of attack. The Great Pyramids are the oldest of the ancient wonders of the world.

However, the materials used for the pyramids built by the Egyptians are still unknown. We still don’t know how these pyramids have managed to transcend time and natural calamities.

It is known that the Egyptians building pyramids used more than 2.3 million stone block. Apart from that, 500,000 tonnes of mortar were used for constructing the Great Pyramid. But we don’t know the composition of the mortar.

Some researchers suggest that in ancient Egypt, pyramid construction involved a simple mixture of sand and water, and it was the ratio of each that helped make the mammoth task possible. In fact, experiments were held to determine how sleds holding large statues were carried.

There is also an “old-wood theory,” according to which Egyptians are building pyramids cut off every tree in Egypt’s forests to use as fuel to create the mortar.

It is also assumed that since machines weren’t invented yet, they created ramps using earthen or natural techniques. This theory has been deemed far-fetched because there is no written, painted record or even scraps of those ramps.

According to Egyptian mythology, when pharaohs are buried, they must be buried with gold, clothes, jewelry, coins, and more valuable ornaments so that they can take them to their afterlife.

Because of this, at the time they were built, the Great Pyramids were filled with treasures. While it was a powerful structure, it wasn’t secure enough to prevent robberies.

By 1000 BC, so many lootings had happened in the pyramids that almost no treasure remained. Tutankhamun’s tomb, discovered by Howard Carter, was one of the first to be uncovered with a lot of treasure still intact.

According to reports by Herodotus, who went to Egypt in the 5th century BC, most of the pyramids seemed completely robbed of their treasures.

7. Strange Theories About Why the Pyramids Were Built

The Egyptians built pyramids has a lot of conspiracy theories surrounding its construction and purpose. While the common opinion is that the purpose of the pyramids was to store the tombs of pharaohs in a prestigious place, there are theories that negate it and offer counter-opinions.

Many think that there was no sense in one king building multiple pyramids for tombs. One theory suggests that the pyramids may have been built to serve the purpose of heavenly abode for Osiris, the god of the afterlife and death.

There was also a controversial statement made by Ben Carson, a Republication politician in the US. He stated that the Egyptian building pyramids did it to create storage for grains.

The only evidence backing this highly condemned statement was that there were remains of grains found in the pyramids. But this theory has been proved wrong by many archaeologists and Egyptologists.

There is also a belief that the pyramids were built by aliens and not ancient Egyptians. This could explain why they were aligned with Orion’s Belt. Click here to read a more detailed account of why Egyptians built pyramids.

There are many theories about builders of Egyptian pyramids, most backed with evidence, even if it is far-fetched; there is still an ongoing investigation, research, construction, excavation, and archaeology being done to get more cohesive answers. The pyramids of Egypt have posed one of the greatest mysteries known to human beings. And the more we look, the more answers we will discover.