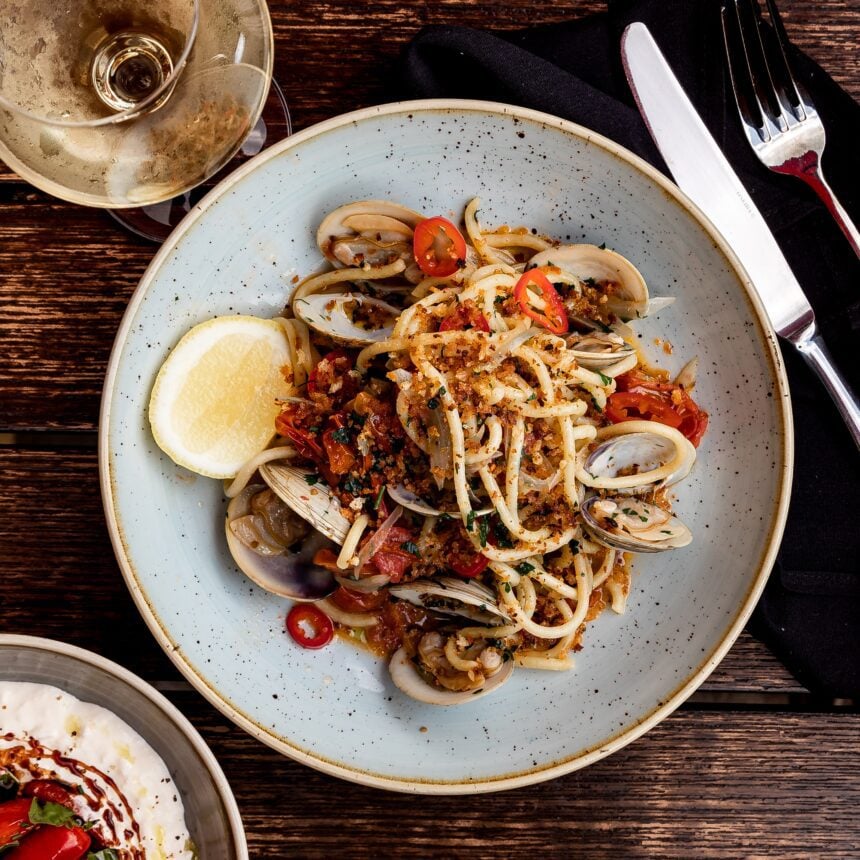 It’s no secret that working in the fast food industry is subject to criticism. I’m sure we all hear the saying quite often – “Work hard, or you’ll be flipping burgers for the rest of your life” and might even be guilty of saying it a couple of times.

Most people believe working in a fast food restaurant is ‘below’ our standards. This brings us back to the question: Why do we look down on fast food workers?

Fast food is a term used to describe meals that may be made and served in a short amount of time. While any meal with little preparation time can be referred to as fast food, the term typically refers to food sold in a restaurant or store with ingredients that have already been heated or cooked (such as pizzas, hamburgers, hotdogs, and so forth) and served to the customer in a packaged form for takeout/takeaway. Outlets could be stands or kiosks that don’t offer any protection or sitting or fast food joints (also known as quick service restaurants).

Before we get the facts straight, we must establish why having a fast food job is associated with being poorly educated, not being able to find a ‘real job,’ or pursuing something when there’s no other option. Typically, there are low entry-level barriers for young people, such as not requiring a degree and it does not require formal qualifications.

Students can mix part-time jobs with their studies because working hours are flexible enough to meet their needs. Fast food companies also began targetting young people for recruitment as they are adaptable and have a reasonable labor force compared to older people.

People have various assumptions and stereotypes about working in fast food, contributing to their low opinion. One example is that many people think working in a fast food restaurant is a “dead-end job.” There are many prospects for progression within the sector, even though it might not be a career path that will lead to high management.

Furthermore, many people think it is “grueling” and “undesirable” to work in a fast food business. Again, this is based on myths and prejudices; while the work may be difficult at times, it’s not laborious.

Lastly, many people believe that people who work in fast food restaurants are unskilled and ignorant.

The Stigma of Working in Fast Food

Why does the stigma persist, then? It could be that people are reluctant to disagree since it has been labeled a social prejudice. Due to the stigma associated with this employment, parents frequently try to talk their kids out of getting jobs at fast food establishments.

People who work at fast food restaurants are inevitably subjected to bullying from their peers or adolescents. They carry the stigma of being seen as uneducated or filthy in society.

Fast food restaurants frequently don’t mind hiring young people, although very few other places will when they first receive their legal working documents. This leads to many younger youngsters taking jobs there. They must therefore experience social injustice firsthand as a result.

Managers of fast food restaurants are under pressure to maintain expenses as low as possible, particularly labor expenditures. For instance, they have little influence over their income and hours worked and are often paid very less with the fear of being laid off if they show any resistance. This could result in the mistreatment of fast food workers and violations of labor laws.

They occasionally require workers to complete unpaid work before or after their planned shift. Employers in fast food restaurants are well known for their anti-union stance and will take tremendous measures to prevent unions from operating there.

But why does the fast food industry pay so little?

Usually, it’s one of the two reasons. First, franchisees’ capacity to pay staff is constrained by their responsibilities to oversee daily operations and pay royalties.

They are also less interested in the reputation of the fast food franchise because they are distant from the corporate headquarters. According to a National Employment Law Project study, the median wage for front-line fast-food workers is just $8.69 an hour.

Four out of every five fast-food restaurant workers have experienced workplace burnout, frequently severely and repeatedly. If we talk about McDonald’s, there is no worker’s compensation and no set first-aid practices; in fact, over 33% of burned fast food employees were told to treat their wounds with condiments.

If you didn’t already know, McDonald’s, a company we all love and hate- is a multibillion-dollar corporation that employs millions globally. It has enabled middle-class, single parents and high school students to support family members. College students with busy schedules do well in fast-food jobs.

There are far too many assaults against McDonald’s low-wage workers. There have been incidents of customers physically attacking McDonald’s employees since 2019. As an illustration, a client furious that he did not receive a plastic straw seized a cashier in St. Petersburg.

After waiting too long for his ordered french fries in South Carolina, a guy flung hot coffee on a 16-year-old employee. Burns of the third degree was present on the worker. This is sufficient.

There shouldn’t be any physical intimidation of McDonald’s employees at work. As more employees come out with accounts of physical abuse, this issue has since spurred rallies for greater employee safeguards and calls for increased training to combat violence in the workplace.

But fast food places aren’t bad, and people are wrong to eat fast food. Although it is classified as ‘junk food,’ nobody who consumes fast food is illiterate, stupid, or in need. In other words, it’s just hunger.

Many university students do not always have the time to go shopping, prepare a meal for thirty minutes, and then cook. The only alternative available is occasionally to buy a wrap at Burger King for $1.

Why don’t people want to work at fast food restaurants in the first place?

With little money, there is a lot of pressure to provide good customer service, complete orders correctly, deal with various personalities, move quickly, and work in long lines. Most people have a tough time throughout their shifts, which is not good.

They move quickly, lift big objects, clean, and are on their feet all day. These jobs aren’t particularly difficult, yet they are incredibly stressful and draining.

People working in fast food around the world have long been subject to serious employment violations such as theft of wages, sexual harassment, discrimination, and heightened health and safety risks.

Although society has shamed them into believing they are, someone who works at a fast food restaurant is not a failure. The fact that working as a fast food worker is undoubtedly something that many people hide. They don’t want to be subjected to judgment or verbal abuse from their friends or relatives. They already receive plenty of it from the “Karens” who drive by screaming at them over a wrongly executed order.

Hard work is certainly required for those who work in fast food because they must put in ten-hour shifts all night long to ensure that no client misses out on a midnight snack and provide them food service with a smile on their face.

And the managers can foresee and order enough ingredients for thousands of customers each week, knowing that if they make a mistake, our customers will be prepared to yell, toss drinks over the lack of a special sauce they wanted or add bacon to their burger.

What’s it like working in the fast food industry?

The working conditions at fast food establishments might also vary. High levels of stress are occasionally present for workers. Working with bosses and supervisors can sometimes be extremely stressful. Most managers don’t have to perform any physical labor. Thus, they delegate all work to the normal staff.

However, managers can occasionally be exceedingly tough to work with. This can increase the pressure on the employees. A large consumer base might aid in raising stress levels. Even when they are wrong, customers are always right, and this can increase stress because it might be confusing. Another big source of stress is low pay. Stress might also result from the widespread underpayment of fast restaurant workers.

Unhappy and hostile situations can occasionally result from underpaying and overworking people. Workers may go on strike to demand greater pay when they are overworked. Some of the employees will have to work on holidays if this occurs.

The only business in the rankings to pay more than $10 is In-N-Out, a family-owned franchise that opened in 1948. According to vice president Carl Van Fleet, the company’s founders were certain that employees have to be treated with respect and fairly compensated.

People in the current In-N-Out restaurant make $10.50 per hour when employed. These greater salaries can help with improved living expenses and also aid in developing abilities that are desirable to potential employers.

For example, fast food professions are considered careers with few opportunities to advance. To work there, fast food restaurants don’t require certified skills offered in colleges or trade schools. Because there are so many people working minimum wage jobs, people are giving up their careers simply because they can pay their bills with that job for the time being.

Fast food wages are not enough to cover living expenses for the duration of your life, and this impacts the economy because it lowers rather than raises its status. Because poverty is not reduced and everyone in the economy suffers. As a result, the economy as a whole suffers.

Fast food is a very useful industry in modern society. Most individuals often eat fast food during their lunch periods, if not daily. Today’s fast-paced lifestyle makes it impossible for folks to prepare lunch and dinner every single day as they formerly did. Since we would have to prepare our food, we presumably would have been running late or constantly hungry without fast food.

These fast food restaurant employees put just as much effort into their job as everyone else. People who consider working in fast food to be beneath them are typically dislikeable. At the same time, it is wrong to “be kind” merely to prevent “them from spitting in your food.” There is a way to address errors in your order calmly because mistakes occur. The mistake is never made intentionally 99 percent of the time. The employee(s) apologize and can fix it.

Although a college degree is not required for employment in the fast food industry, it doesn’t indicate that the workers are of lower quality. Like any career, working in fast food requires training, effort, and commitment. So the next time there’s an error with your order, consider that these people are human and may make mistakes rather than whining on social media that this proves they shouldn’t be paid more.

I developed a great deal of respect for those who work in fast food. I try to be as courteous and welcoming as possible whenever I enter a drive-through. They undoubtedly had a difficult day, so I want to do everything I can to make it better for them. I urge everyone to realize the same.