World Famous Leaders Who Were Assassinated 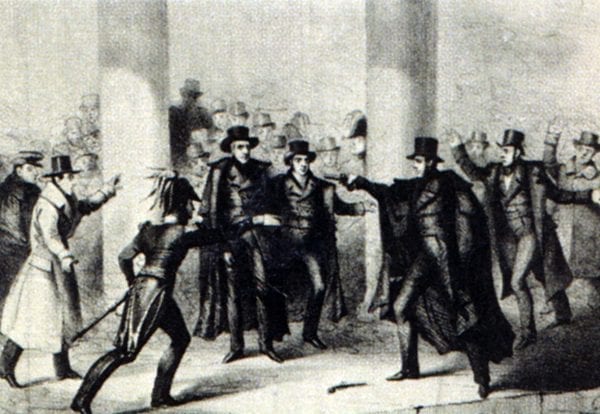 Looking into the meaning of assassination, it is murdering of a public figure. If the public figure is a famous leader, then the assassination is associated with a political motive, revenge, religious motive, etc. This is the list of 5 prominent political leaders who were killed for various reasons.

John Fitzgerald Kennedy is the first Roman Catholic president of the United States (1961-1963). During his time as a president, he faced some foreign crises such as Cuban Missile Crisis, building of the Berlin Wall, American Civil Rights movement.

Date: 12:30 PM on November 22nd, 1963.
Killer: Lee Harvey Oswald
Weapon: Carcano Rifle
Why?
There are many conspiracy theories behind his killer. The most accepted theory is that Oswald was a Palestinian terrorist seeking revenge for the US’ support for Israel.

Abraham Lincoln dubbed as the Honest Abe was the 16th president of the United States (1861-1865). He steered his country during the American Civil War and brought about the liberation of slaves. He was the first American president to be assassinated.

Date: April 14th, 1865.
Killer: John Wilkes Booth
Weapon: Pistol. He shot Lincoln through the back of the head in a theatre.
Why?
Booth was allegedly enraged by the Lincoln’s support for the freedom of Blacks in America.

Martin Luther King, Jr. was an American clergyman and a social activist who led the African-American Civil Rights Movement. He promoted non-violent tactics for achieving civil rights. This made him the youngest recipient of noble peace prize in 1964.

Date: April 4th, 1968.
Killer: James Earl Ray
Weapon: Gun. He was shot when he was standing on the balcony. The bullet entered through his cheek and travelled through the spinal cord to reach his shoulder.
Why?
Ray was a white man who was against the King’s movement to put an end to racial discrimination of African Americans.

Franz was an Austrian archduke. He married Sophie, Countess Von Chotek under a lot of conflicts. His assassination was the immediate cause of World War l. A month after his death, Austria-Hungary declared war on Serbia. This war propagated across the continent and transformed into a war between Austria, its allies and Serbia, its allies.

Date: June 28th, 1914.
Killers: Gavrilo Princip, a member of The Black Hand.
Weapon: Gun. In 1914 when he was on a trip to Sarajevo with his wife in an open top car, they were assassinated by the members of The Black Hand, a Serbian group.
Why?
The Serbian group was attempting to gain independence for all the states annexed by Austria-Hungary.

Indira Priyadarshini Gandhi was the first female prime minister of India. She is also the second longest serving female Prime Minister. She was the only daughter of Jawaharlal Nehru, the first prime minister of India.
Date: 9:20 AM on October 31st, 1984.
Killers: Her two Sikh bodyguards, Satwant Singh and Beant Singh.
Weapon: Gun. She was shot in her garden by her two bodyguards.
Why?
Indira Gandhi in early 1800s ordered an attack on the Sikhs’ holiest shrine, Golden Temple in Amritsar in response to the threats regarding the political integrity of India from the Sikh separatists in Punjab. This led to the death of around 450 Sikhs. To seek revenge, her two bodyguards killed her.