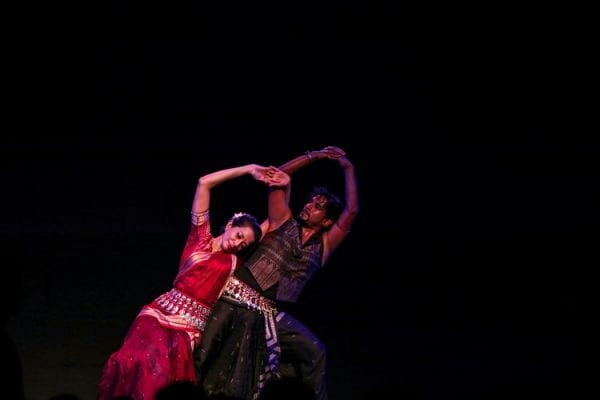 12 Iconic Bollywood Dances Everyone Should Know About

The trend of Bollywood to have dances might seem a bit overdramatic to the world but for Bollywood, it is a way of connecting to the very roots of Indian Theater and acting. ‘Natya Shastra’ has been a part of India dating back to 2 century CE.

Natya shastra had three main parts of it namely Natya or the drama, Nritya or the gesticulation to music, Nritta which is pure dancing. All these parts performed together were known as Natyashastra.

Today this can be seen in the dancing style of movies of Bollywood. No film is complete without at least one dance number. This is not because we like musicals, but because it is the roots of Drama in Indian culture.

From the time that films were started in Bollywood to today’s Guinness record-holding film industry, one thing has been common and that is Dance. Bollywood Dance is a whole genre of Dancing now which can be seen performed in Dancing competitions all over the world.

The changing times have just changed the patterns of Dancing but not the dance itself. Bollywood Dance is a contemporary dance, which incorporates many different aspects of Dance, be it the classical Indian dances of more westernized styles of dance.

Several Bollywood Dances were so iconic that they have left lasting impressions on us, be it for their dance choreographies, the actors performing them or the song winning awards.

Today I would like to list 12 Bollywood Dances which were iconic enough to change the ways of Bollywood:

Without further ado, let’s dive into the world of Bollywood dances.

Performed by the beautiful Madhubala in the role of Anarkali, this was the first-ever Bollywood dance number to be such a big hit. It’s set had taken 2 years to build, costing well over 1.5million dollars, in that time. It remained the most expensively shot song of Bollywood. The Dance itself was iconic.

It shows us some Khatak moves along with some contemporary moves according to that time. The Song is still danced on today. It will forever remain one of the most loved Bollywood dances of all times. It is also one of the most memorable performances of Madhubala

A song ahead of its time. This song was filmed with great difficulty due to Menna Kumari’s ill health. The last greatest performance by Meena Kumari, Pakeezah was a blockbuster, and the dance on Chalte Chalte was its jewel. This Bollywood dance number is all of Meena greatness seen in one dance so beautifully portrayed that it can easily outshine any Bollywood dances of today.

The ambivalence of the song, the music and the dance all of these wrap up together to make Bollywood dancing iconic, and much more meaningful than ever before. It’s one of my mum’s favourite songs even though it was released when she was four.

While Rekha has been seen in several great Bollywood Dances this one is probably her most memorable one ever. Staring in the titular role of Umrao Jaan, Rekha brings Life to this song, by her expressions and her dance moves. A mention to Gopi Krishna for the fabulous choreography on the song. This song is a fan favourite and even though the film was remade but nothing can beat the charm of Rekha Ji’s dancing in this song. The movie is filled with great Bollywood dances but Dil Cheez Kya hai is the most notable dance performance.

I bet you are already dancing just after reading the title. This Bollywood Dance number put Bollywood dances on the world map. This song according to BBC has been voted ninth out 7000 songs from all over the world, voted by 155 countries. The song is catchy, and a true dancing song.

The song is an A.R.Rahman classic, it was shot on a train with no camera tricks, no green screens, and gave Bollywood Malika Arora, who let’s face it is one the most terrific Bollywood dancers of all times. It has been used in several different shows and movies all around the world most notably in the opening and closing credits of Inside man(2006). I remember dancing to it every time it aired on TV when I was only three years old.

“Mai khawboon ki shehjazaadi, Mai hu har dil pe chayi” with these lyrics and the dance moves, Sridevi did really take over all hearts, as the song’s lyrics suggest. This dance number is a hallmark for every Bollywood dance made after this movie. While we have seen Sridevi in numerous songs and dances, this is by far the crowning glory of her Bollywood dance career.

The song is catchy, fun and upbeat and dance moves still can not be matched by any other song. I have lost count of the number of times this song has been performed in my schools. That is the magic of this Bollywood Dance number, you can’t help but feel happy and dance to it every time it plays, and it never gets old. This Bollywood dance number is one of the songs which has been remade twice from the time of its release.

Click here to check out related articles on Bollywood.

We already know that Madhuri Dixit and Saroj Khan together create magic but add to that Aishwarya Ray Bachchan and you have got yourself a spellbinding performance. Dola re Dola is a Bollywood Dance Number that defines an era, the early 2000s. This song won hearts all over not for the dance but the emotions portrayed through the dance.

It won Saroj Khan her eighth Filmfare Award and also introduced Nautwary form of dance to Bollywood dances. A mix of Kathak and Bharatnatyam, this Bollywood dance performance is an example of the roots of Bollywood dancing in Natyashastra.

Bonus: Pinga from Bajirao Mastani (2015):
Pinga is a Bollywood dance number which gives the same feel as Dola Re Dola. A song where two women dance uplifting each other and showing that love triangles can be kept aside for a good Bollywood dance and women empowerment. The lyrics of the song caught the feel of both the women and the dances moves are on point. Bollywood dances can surprise you sometimes, and this song definitely surprised me.

This is originally a Tollywood song but much recognised as a Bollywood dance. With Prabhu Deva at the helm of the song, the dance leaves everyone dancing to the beats. The dance is one to die for and is one of the most iconic Bollywood dances ever shot, not because of the actors or any other thing but because of the dance. Adding to the charm of Bollywood Dance are the visual effects that in the nineties were very new technology.

Bonus: Muqabala from Street Dancer(2019):
The film itself might have been a disappointment but this remake of the song is not. This Bollywood dance features Prabhu Deva dancing to the same beats again only, much more modernized than before. A Bollywood dance lover is sure to recognise the song and also appreciate it.

This is the song that gave us the dancing icon that is Hrithik Roshan. A song that took Bollywood with a sensation, and told the industries that Bollywood numbers could solely be filmed on the leading men as well. This song was an instant hit with the catchy tune and even catchier hook step. This Bollywood number also introduced us to Hrithik Roshan who will be featured once more on our list and is one the best dancers of Bollywood.

The whole world danced to this Bollywood dance number. A surprise to all those foreigners who went to watch the movie as this type of Dance numbers was usually seen in Musicals not commercial or art movies, but for us Bollywood dance lovers it was a treat.

This is the song that won A.R.Rahman the oscar and put India on a pedestal for the world to see the Bollywood dances. It was after ‘Jai Ho’ won the ‘Best Song’ at the Oscars that people around the world started taking Bollywood dance as a category of dance and it gained popularity across the world. It is also brilliantly choreographed on V.T. station Mumbai giving off a fairytale-like feel and a great ending to a movie shot in India.

This Bollywood Dance sequence brought a different freshness to Bollywood. With a song that has English lyrics and moves that are different from any previously seen dances. This song is performed by Hrithik Roshan and Aishwarya Ray Bachchan. One of the most brilliant choreographies of Shaimak Davar, this Bollywood dance number is catchy with complicated-looking moves which are quite easy if practised ( I know from Experience). The Bollywood dances before this were not so much rooted in western steps which are seen in this song.

The sombre mood of the scene going on contrasts the song and the dance going on, but you don’t mind one bit because it’s just that amazing. The scene is thrown to the back when Katrina starts shaking her waist to hook steps of the song. This Bollywood Dance number is the best way to end this list.

Bollywood Dance is a storm which has taken the world by surprise and uplifted the standards of dancing. It is not just a genre of dancing but a world of its own. It is what one would call a sensation, a dancing sensation.

So, there you have it folks 12 Iconic Bollywood Dance numbers that in my opinion should be mentioned. I know countless other songs and Bollywood dances should be in the list but we only had place for 12 and I had a great deal of difficulty deciding which ones to keep and which ones to ignore.

If you think any other Bollywood Dance sequence is worth mentioning or should have been on the list let me know. Also, let me know your favourite Bollywood dance songs, be it from this list or some other dances.